Look at Hugo Chavez Through a Latin American Lens

Alejandro Velasco is assistant professor of Latin American studies at New York University. He is the author of numerous scholarly articles on Venezuelan history, and is the author of the manuscript "A Weapon as Powerful as the Vote’: Urban Protest and Electoral Politics in Modern Venezuela." He received his PhD in history from Duke University in 2009. 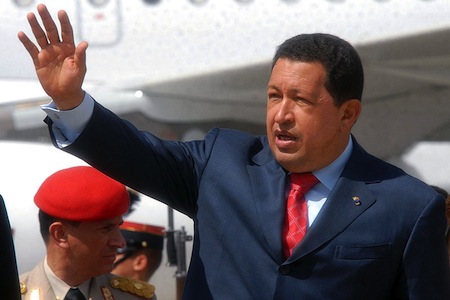 Few would contest that Hugo Chávez had a penchant for fiery rhetoric. Less understood is the role that rhetoric played in turning Latin America from a region where the United States held unparalleled sway when he first took office in 1999, to one where leftist governments of varied stripes now assert unprecedented autonomy vis-à-vis their neighbor to the north.

When he died on March 5, many in the U.S. likely remembered Venezuela’s late president for proclaiming George W. Bush “the devil” during a speech at the United Nations in 2006. It was the kind of provocative statement that had long since earned Chávez a reputation as Washington’s chief antagonist in Latin America. In 2001 it was Chávez who blasted the U.S. for fighting “terror with more terror” in bombing Afghanistan; Chávez who took to referring to the U.S. as “the Empire” after the Bush administration endorsed a failed coup against him in 2002; Chávez who called Muammar Gaddafi “my brother” in 2004, four years before Condoleezza Rice’s visit to Tripoli thawed U.S. relations with the Libyan dictator.

It was easy to dismiss such antics as bluster. For all of Chávez’s rhetorical barbs, Venezuela remained deeply tied to his putative nemesis. Oil accounts for nearly 20 percent of Venezuela’s GDP and 95 percent of its exports, most of it sold to the United States. Since 1999 only once did shipments to the U.S. stop, during an opposition-led strike of the state oil company in early 2003. In response, Chávez fired over half of the company’s staff, replacing them with loyalists. Never again did oil from Chávez’s Venezuela cease flowing to the United States.

To be sure, as Venezuela remained tied to the U.S., the U.S. remained tied to its fourth largest supplier of oil. Yet the apparent contradiction between anti-U.S. firebrand and dutiful trade partner led some to distinguish, as did one former U.S. ambassador to Venezuela, between what Chávez did and what Chávez said, especially in the early years of his presidency. Indeed, though he died a socialist revolutionary, it was only in 2005 that Chávez declared himself a socialist. Though he generously distributed oil and money to build regional alliances, it was only in 2004 that such alliances formally launched, and very limited in scope. And while direct social spending helped cement his popularity among Venezuela’s poor, it wasn’t until 2003 that most of those programs began to flow, and only tentatively at first.

In other words, before Chávez the socialist, oil-rich revolutionary, there was Chávez the firebrand. With oil prices at the time of his inauguration at $9 per barrel, what he could do as president of an oil nation was limited. What he could say, however, was decidedly not. And what he said powerfully spotlighted the plight of a region long mired in austerity, privatization, and decentralization policies imposed by the “Washington Consensus”: that Latin America’s most dispossessed had suffered, not benefitted, from two decades of structural adjustment; that dismantling the state in the name of decentralization had weakened, not strengthened, efforts at genuine political inclusion; that a nation’s resources should primarily attend to the needs of its poorest, not its creditors; that free trade agreements billed as economic panaceas belied unequal conditions that left Latin American nations more, not less, economically vulnerable.

If what Chávez said rang revolutionary, it was primarily because of the context in which he spoke. Calling for a more robust state at a time of austerity, for greater sovereignty at a time of privatization, for fair trade at a time of free trade, for a multi-polar world at a time of unilateral action; all expressed long held aspirations by marginalized sectors in Latin America. That they were taken up by the president of Venezuela at once shed international light and legitimized those claims.

But they also inspired long dormant confidence about who could question what had formerly been taken for granted in the region, and how: if such pointed critiques could come from Venezuela -- once the staunchest of U.S. allies in the region -- why not elsewhere? In fact, after 2002, a growing crop of like minded presidents swept into office in Argentina, Brazil, Bolivia, Nicaragua, Uruguay, and Ecuador, among others. Meanwhile, rising oil prices allowed Chávez to complement rhetoric with resources, putting meat on the bone of Latin American unity through new alliances and institutions that explicitly sidelined the United States.

New allies and power also reconfigured the role of Chávez’s rhetoric. In the way radicalism often give moderates room to maneuver, it now provided cover for regional leaders to buck U.S. influence and assert greater political and economic control over their own affairs. When Washington’s proposed Free Trade Area of the Americas (FTAA) collapsed in Argentina in 2005, U.S. media and officials identified Chávez as the culprit, flashing images of a fiery president leading thousands in anti-U.S. chants at a local stadium. But it was Brazil that ground negotiations to a halt when it demanded that the U.S. drop its agricultural subsidies as an unfair advantage over Latin American nations.

The collapse of the FTAA signaled the rise of a region willing to demand inclusion in geopolitical affairs as an even partner. It also belied efforts to marginalize Venezuela by distinguishing between a statist “bad” left and a more market friendly “good” left in Brazil. Instead, such binaries misunderstood the extent to which Chávez’s bombast not only helped to bring about that left turn, but also sustained it. It was a sentiment best captured by former Brazilian president Luis Inazio Lula da Silva in a much remarked New York Times editorial recalling his relationship with Chávez: “No remotely honest person, not even his fiercest opponent, can deny the level of camaraderie, of trust and even of love that Mr. Chávez felt for the poor of Venezuela and for the cause of Latin American integration.”

Debates about Chávez’s actions at the service of the poor and regional integration have and will continue to rage. That his policies halved poverty in Venezuela and helped usher a new era of Latin American unity is beyond doubt, as is a record that includes concentration of power, persecution of political opponents, and continued dependency on oil. But for Lula, reflecting on Chávez’s complex legacy, the more significant accomplishment lies beyond what Chávez did: “[Chávez] was worth it not just for the achievements, but for the symbolism ... Recuperating the self-esteem of a people, and making the people come to believe, that Venezuela was much greater than it had been imagined by the elite up to that time.” And so too with the rest of the region. It was not despite but because of his fiery rhetoric that Chávez’s influence in region extended so widely.