The Historic Agreement to End the Conflict in Kosovo

Ian Reifowitz is the author of "Obama's America: A Transformative Vision of Our National Identity" (Potomac Books, 2013). 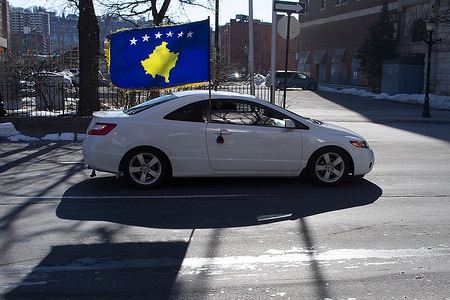 After protracted, months-long negotiations, Kosovo and Serbia recently agreed to a compromise on sovereignty and autonomy that would end two decades of conflict. In extinguishing the last embers of war in what was Yugoslavia -- the volatile, ethnically divided nation where the assassination of an Austrian archduke launched World War I, and where civil war throughout the nineties led to ethnic cleansing and other atrocities -- Europe is nearing the end of its long journey to overcome its tribal enmities and build a cohesive, peaceful civilization.

These hopeful developments overseas have been on my mind recently. This semester, I’ve been teaching a course built around on the debate within the West over human nature: What are we? What can we be? Why do we act the way we do? John Locke argued that we are born a blank slate, that our experiences and interactions form our character. Overall, Enlightenment thinkers believed people could, if properly educated, learn to act solely based on reason.

My students later encounter Friedrich Nietzsche, who praised the “will to power” as motivating the strong to dominate, and Sigmund Freud, who feared that our inclination toward aggression could destroy civilization. Freud believed that although we could be rational at times, we’d never “enlighten” away our instinctual impulses. He recognized Nazism as the extreme manifestation of these impulses, a system based on hate that rejected the idea of justice -- that the strong must be prevented from subjugating the weak -- on which rested his definition of civilization.

Centuries after the Enlightenment, we’ve arrived at a more humble view of the possibilities of reforming human nature. We’ve seen too much evil -- above all, in the cataclysm of World War II -- to expect a paradise of reason. Yet democracy, significant warts and all, stands virtually alone in a West that has rejected Nazism and communism. Although they don’t always live up to them, democracies operate from principles centered on equality before the law. Democracy proclaims that the strong cannot -- by virtue of their will to power -- claim the right to dominate the weak.

Serbia holds some of the last vestiges of Europe’s ancient blood feuds. In the 1990s, Serbs clung to the idea that racial superiority justified their rule over supposedly inferior neighbors. Serbian ethnic nationalism stirred up people’s base instincts, fomenting hate as a motivation for murder and conquest.

The European Union, alternatively, appealed to reason. It offered little in the way of emotional attraction or visceral triumphs, and drew on no traditional identities. During the 1990s, the EU’s expansion into Eastern Europe stood alongside the tribal bloodshed unleashed in the former Yugoslavia by Serb leader Slobodan Milošević.

One question I’ve posed in my class is whether Europeans will ultimately choose EU integration over ethnic nationalism. Membership in the European Union -- which, despite the travails of Greece and Cyprus, offers the promise of greater prosperity -- is a strong incentive to choose peace. And yet Freud’s concern about humanity’s indelible aggressive urges remains relevant. One country can drag a continent into darkness.

The key question for Serbia, in Freud’s terms, has been which part of its “mind” will triumph: the id, its nonrational instincts -- or the superego -- the part that suppresses those instincts in favor of pursuing the norms of “civilization” and the material benefits that accompany it.

The compromise between Serbia and Kosovo is a sign that reason has won out. The EU brokered the agreement, and made clear that its acceptance removes the existing roadblocks to membership for both countries. Each one moved off its maximalist positions -- despite the emotional cost of those concessions -- because the benefits outweighed that cost. That’s a rational decision of the kind Freud wasn’t confident societies would make.

Civilization will always have challenges to overcome, but the end of racial wars of conquest in a continent long riven by them gives hope that humanity is, finally, making progress.