The Problem with Evolutionary Psychology

Marlene Zuk is a professor of ecology, evolution and behavior at the University of Minnesota. The author of Sex on Six Legs, she lives in St. Paul, Minnesota. 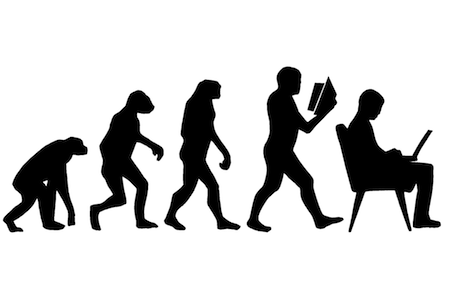 Many of us have a hard time letting go of the past, whether that means the songs of our youth (anyone else a Joan Jett fan?) or a 1950s nuclear family structure. A yearning for the good old days is almost beyond cliché. But sometimes we yearn, or at least idealize, the Very Old Days, the ones in the Pleistocene, some 2.5 million to 12,000 years ago, the period that encompassed the emergence of our species. During that time, humans evolved to walk upright, lose most of our hair, and use tools. It’s only in the blink of an eye, evolutionarily speaking, that we acquired such accoutrements as agriculture, settlements, and domesticated animals, much less iphones and Cheez Whiz. At the same time, we’re suffering from diseases and conditions we are pretty sure weren’t around in the Stone Age, like diabetes, carpal tunnel syndrome, and fear of flying.

From these observations, it is tempting to conclude that we are misfits in the modern era, and that our health, our family lives, and maybe our sanity would be improved if we could live the way early humans did. The premise is that our bodies and minds evolved under a particular set of circumstances, and in changing those circumstances without allowing ourselves time to evolve in response, we have wreaked the havoc that is modern life. Blogs, articles, morning TV, dozens of books and self-help advocates promoting slow-food or no-cook diets, barefoot running, co-sleeping with our infants, and other measures large and small claim that it would be more natural, and healthier, to live more like our ancestors. A corollary to this notion is that we are good at things we had to do back in the Pleistocene, like keep an eye out for cheaters in our small groups, and bad at things we didn’t, like negotiate with people we can’t see and have never met.

But is this historical ideal, and the notion of modern dystopia that accompanies it, accurate? Like so many venerated views of the past, it is not. It is not accurate both because it distorts the way we actually lived many thousands of years ago and because it contains a misconception about how evolution works.

First, when exactly was this age of harmony, and what was it like? Do we want to hew to the time when people lived in small hunter-gatherer groups? This encompassed a long period, perhaps 50,000 years, and humans lived in many parts of the globe, and ate many different things, during this time. A single ancestral diet, or lifestyle, is hard to pinpoint. A 2013 Scientific American article compares the relative proportions of meat, roots, fruits and vegetables, and nuts in four contemporary hunter-gatherer populations: the Hiwi of South America, the !Kung and Hadza of Africa, and the North American Inuits. As you might imagine, the variation is immense, with the Inuits relying on meat and fish but the !Kung subsisting on seeds and nuts. Early humans also doubtless ate a variety of foods, depending on the available plants and animals and the tools that had been developed to harvest them. It is certainly the case that no ancestral -- or contemporary foraging -- peoples lived on Cheetos and Coke, and avoiding such calorie-dense but nutrient-poor foods is beneficial, but after broad pronouncements like these, the details get murky.

Second, and more troubling, is the assumption that evolution proceeded in a way that inexorably led us to a perfect life, an adaptive Eden from which we tumbled once people started settling down and building cities, or using laptops and drinking lattes. We are all familiar with the cartoons that depict so-called evolutionary progressions, with a fish crawling onto land, turning into a reptile that then morphs into an indeterminate mammal, then an ape, and then finally a human being. Some of the more recent versions show the upright, spear-carrying human transforming into a guy with a pot belly slouched over a computer and clutching a giant soda, or sometimes holding a machine gun and looking surly. Either way, the implication is that we have, somehow, fallen from grace in our evolutionary path.

But those cartoons, amusing though they might be, paint an incorrect picture. They make it seem as if each life form that evolves is an improvement on the one before, like models of cars, so that the 2013 Honda Accord is better than the 2012, which was better than the 2011, and so forth (ignoring for the moment the degree to which these alterations are overblown by the car manufacturers). Although it is true that amphibians arose after fish, and mammals after both of them, mammals are not “more evolved” than either. Furthermore, unlike the auto manufacturers who want you to believe that we are progressing toward ever more efficient and comfortable cars, evolution is not progressing toward anything, and has no goal or direction other than the production of organisms adapted to their environments. Every being alive today is just as evolved as every other.

Evolution itself is continuous, which makes singling out the Pleistocene, or any other period, as a time of harmony problematic at best. Some traits evolve quickly, some slowly, but none of them are aiming towards anything. Was a life of hunting our evolutionary apex? Scavenging, or eating the carcasses of dead animals left by (or stolen from) predators like lions, is thought to have preceded the evolution of hunting. Why wasn’t that the time of perfection, with then-humans bemoaning the new-fangled practice of running down game yourself instead of decently snatching it from another predator as we were supposed to?

Historians know to avoid presentism and the dangers of interpreting the past through lenses of the present. Its pitfalls might apply equally well to interpretations of our evolutionary history. It is futile to choose a particular time or place as one of a more natural life, the way we were meant to be, because we weren’t meant to be any way in particular.