Juan Cole is the Richard P. Mitchell Professor of History and the director of the Center for South Asian Studies at the University of Michigan. His latest book, "Engaging the Muslim World," is just out in a revised paperback edition from Palgrave Macmillan. 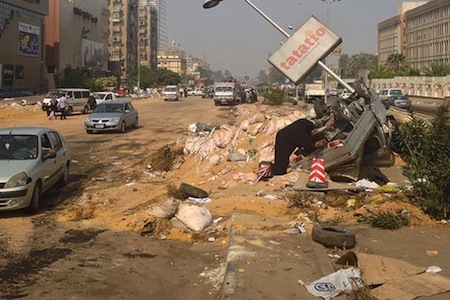 Aftermath from violence in Mabaa, Cairo, Egypt. Via Flickr/Neon Tommy.

The horrible bloodshed in Egypt on Wednesday marked a turning point in the country’s modern history, locking it in to years of authoritarian paternalism and possibly violent faction fighting. The country is ruled by an intolerant junta with no respect for human life. Neither the Brotherhood nor the military made the kind of bargain and compromises necessary for a successful democratic transition. It is true that some armed Brotherhood cadres killed some fifty troops and police, and that some twenty Coptic Christian churches were attacked, some burned. But the onus for the massacre lies with the Egyptian military. Mohamed Elbaradei, who resigned as interim vice president for foreign affairs, had urged that the Brotherhood sit-ins be gradually and peacefully whittled away at. His plan was Egypt’s only hope of reconciliation. Now it has a feud.

Egypt began a possible transition to parliamentary democracy in February of 2011 after the fall of Hosni Mubarak. Although the military had made a coup, the aged Field Marshall Hussein Tantawi was not interested in ruling himself and sought a civilian transitional government that the military could live with. He wanted guarantees that the new government would not interfere with the military’s own commercial enterprises and attempted to assert a veto over the new constitution lest it veer toward Muslim fundamentalism.

The major political forces said they were committed to free, fair and transparent parliamentary elections. The Muslim Brotherhood, the best organized political group, pledged not to run candidates in all constituencies so as to show they weren’t greedy for power, and said they would not run anyone for president lest they give the impression they were seeking control of all three branches of government. The Brotherhood said it wanted a consensual constitution.

Behind the scenes, generals like Omar Suleiman (d. 2012) were furious about the constraints being lifted from the Brotherhood, convinced that they had a secret armed militia and that they were angling to make a coup over time. His views turn out to be more widespread than was evident on the surface.

In 2011-2012, the revolutionary youth, the liberals and the Brotherhood made common cause to return the military to their barracks.

But then the Brotherhood broke all of its promises and threw a fright into everyone -- youth, women, Coptic Christians, Liberals, leftists, workers, and the remnants of the old regime. The Brotherhood cheated in the parliamentary elections, running candidates for seats set aside for independents. Then they tried to pack the constitution-writing body with their parliamentarians, breaking another promise. They reneged on the pledge to have a consensual constitution.

Once Muhammad Morsi was elected president in June, 2012, he made a slow-motion coup. He pushed through a Brotherhood constitution in December of 2012 in a referendum with about a 30 percent turnout in which it garnered only 63 percent -- i.e. only a fifth of the country voted for it. The judges went on strike rather than oversee balloting, so the referendum did not meet international standards. When massive protests were staged he had them cleared out by the police, and on December 6, 2012, is alleged to have sent in Brotherhood paramilitary to attack leftist youth who were demonstrating. There were deaths and injuries.

Morsi then invented a legislature for himself, declaring by fiat that the ceremonial upper house was the parliament. He appointed many of its members; only 7 percent were elected. They passed a law changing the retirement age for judges from 70 to 60, which would have forced out a fourth of judges and allowed Morsi to start putting Brotherhood members on the bench to interpret his sectarian constitution. He was building a one-party state. His economic policies hurt workers and ordinary folk. He began prosecuting youth who criticized him, his former allies against the military. Eight bloggers were indicted. Ahmad Maher of The April 6 youth group was charged with demonstrating (yes). Television channels were closed. Coptic school teachers were charged with blasphemy. Morsi ruled from his sectarian base and alienated everyone else. He over-reached.

In my view Morsi and the Brotherhood leadership bear a good deal of the blame for derailing the transition, since a democratic transition is a pact among various political forces, and he broke the pact. If Morsi was what democracy looked like, many Egyptians did not want it. Gallup polls trace this disillusionment.

But the Egyptian military bears the other part of the blame for the failed transition. Ambitious officers such as Abdel Fattah al-Sisi, Morsi’s Minister of Defense, were secretly determined to undo Morsi’s victory at the polls. They said they wanted him to compromise with his political rivals, but it seems to me they wanted more, they wanted him neutered. When the revolutionary youth and the workers and even many peasants staged the June 30 demonstrations, al-Sisi took advantage of them to stage a coup. Ominously, he then asked for public acclamation to permit him to wage a war on terror, by which he means the Brotherhood. I tweeted at the time: “Dear General al-Sisi: when activists call for demonstrations, that is activism. When generals do, that is Peronism.”

Although al-Sisi said he recognized an interim civilian president, supreme court chief justice Adly Mansour, and although a civilian prime minister and cabinet was put in place to oversee a transition to new elections, al-Sisi is in charge. It is a junta, bent on uprooting the Muslim Brotherhood. Without buy-in from the Brotherhood, there can be no democratic transition in Egypt. And after Black Wednesday, there is unlikely to be such buy-in, perhaps for a very long time. Wednesday’s massacre may have been intended to forestall Brotherhood participation in civil politics. Perhaps the generals even hope the Brotherhood will turn to terrorism, providing a pretext for their destruction.

The military and the Brotherhood are two distinct status groups, with their own sources of wealth, which have claims on authority in Egypt. Those claims were incompatible.