No, It Wasn’t Inevitable that Putin’s Russia Would Descend into Lawlessness

Jonathan Daly, Professor of History at the University of Illinois, is the author of Crime and Punishment in Russia: A Comparative History from Peter the Great to Vladimir Putin (Bloomsbury, 2018). 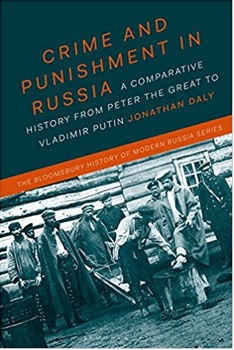 Russia’s leading opposition politician, Aleksei Navalny, and its most acclaimed theatre director, Kirill Serebrennikov, have been jailed on apparently trumped up charges. Corruption is rife throughout the criminal justice system. Presidents Putin and Medvedev have failed in their proclaimed effort to strengthen the rule of law in Russia. How did the country get to this point?

Russia's trajectory for two centuries before the revolution of 1917 exhibited a fairly consistent pattern of reform from above and the growing predictability, impartiality, accessibility, and fairness of the legal system. In the early 1700s, Peter the Great regularized judicial procedures and centralized judicial oversight. At mid-century his granddaughter Elizabeth curtailed the use of capital punishment. Inspired by European Enlightenment reformers, Catherine the Great instituted specialized courts, including a court of conscience tasked with softening the application of criminal law. Her grandson Alexander I abolished torture and harsh forms of bodily mutilation as punishments.

More radically, Alexander II in 1864 decreed the creation of a fully independent judicial system with an independent bar and judges appointed for life. With one stroke of a pen, he therefore instituted a separation of powers in Russia. Although his son Alexander III attempted to diminish judicial independence, trained jurists committed to the rule of law at the highest levels of government pushed back, foiling most of the proposed "counter reforms." The Revolution of 1905 shook the very foundations of the state and resulted in thousands of dead on both sides of the barricades. To restore calm, Emperor Nicholas II expanded civil rights, increased press freedom, and created a representative institution, the Duma.

Russia remained an authoritarian monarchy with a political police more intrusive than elsewhere in Europe. Moreover, the government augmented its administrative power during World War I, as did all the belligerent governments. Even so, when revolution broke out in February 1917, the leaders who came together and formed the Provisional Government, many of them lawyers, showed a strong commitment to the preservation of the rule of law in Russia.

The revolutionary leaders were so euphoric that they dismantled the entire police apparatus in the hope that harmony would reign among the newly liberated population. Even prisoners were released, many of them common criminals. Court records were destroyed by crowds who hunted down suspected former policeman. Police forces under the supervision of public control were to be instituted but they never proved up to the task. Over the summer, social order broke down. Criminality flourished. Many citizens took the law into their own hands, lynching suspected lawbreakers. Armed workers maintained order in their neighborhoods, but elsewhere citizens were left to their own devices. By early fall, Russia was a failed state.

The most radical revolutionary activists, the Bolsheviks, profited from the social disorder and widespread public disillusionment. They enjoyed strong support among urban workers, but most people had completely disengaged from politics as they struggled to survive. The Bolshevik seizure of power in Petrograd in October went all but unnoticed by the citizenry. At first, the leadership did not plan to create a police apparatus, expecting revolutionary and proletarian consciousness to promote the spontaneous restoration of order. Reality turned out differently. The massive looting of wine cellars and liquor depots fueled extraordinary drunken riots, causing further institutional breakdown.

Ultimately, the Bolsheviks responded with the re-creation of centralized, professional police forces—both regular and political. Because the Bolsheviks refused to share power with any but the narrowest segment of political actors, civil war inevitably broke out in 1918 and raged for two years, further undermining social norms and brutalizing the political culture.

A peculiarity of the Soviet political system that emerged from the crucible of civil war was its politicization of many activities considered private matters elsewhere. For example, the employment of wage labor and many forms of buying, selling, and producing goods were deemed criminal offenses. During the New Economic Policy (1921–1928) such restrictions were loosened but never fully dispensed with.

Similarly, political dissent of almost any kind entailed potentially harsh punishments. Even resisting a policy clearly detrimental to one's livelihood and well-being—for example, refusing to hand over one's land and livestock during collectivization (1929–1933)—typically earned one the label "kulak” and either execution or banishment to a remote and sparsely inhabited location. The criminal justice system was actively involved in the repression of such unfortunates. Arbitrary punishment reached its paroxysm in 1937–1938, in a campaign aimed largely against "socially harmful elements," when, according to official statistics, 681,692 people were executed without due process.

After the death of Stalin in 1953, the Soviet criminal justice system grew more regular, less arbitrary, more predictable, and fairer. Yet throughout the Soviet era, any judicial case involving a hint of political opposition—or in which senior officials took a personal interest—was unlikely to be judged fairly. In fact, informal, behind-the-scenes interference throughout the judicial system remained a core feature of Soviet life.

Serious efforts were made to reform the criminal justice system during the Gorbachev years (1985–1991) and after the fall of communism. But a breakdown of social order and a dramatic increase in criminality accompanied the emergence of ruthless private enterprise in the 1990s. Organized criminals gained control of legitimate business. The informal, arbitrary, and personalized interference in criminal justice persisted, especially when important officials had a stake in a case's outcome.

Both Vladimir Putin and Dmitry Medvedev are trained lawyers and each made apparently serious efforts to reform the justice system, to promote the rule of law, and to create a more predictable environment, partly in the hope of helping business to flourish. In fact, Putin went so far as to claim he wished to establish “the dictatorship of law.” Unfortunately, the country got more dictatorship from his administration than law.

In response to the recent successful launch by the American firm SpaceX of its Falcon Heavy rocket, Russia's First Deputy Prime Minister Igor Shuvalov expressed the hope that his country would soon produce "our own Elon Musks," referring to the founder of SpaceX. Without a more vigorous rule of law, however, it is unlikely Russia will succeed in winning the commercial space race, or any other commercial race.