Woodstock, The Moon Landing and Sesame Street, Too: 50 Years of American Cult Art 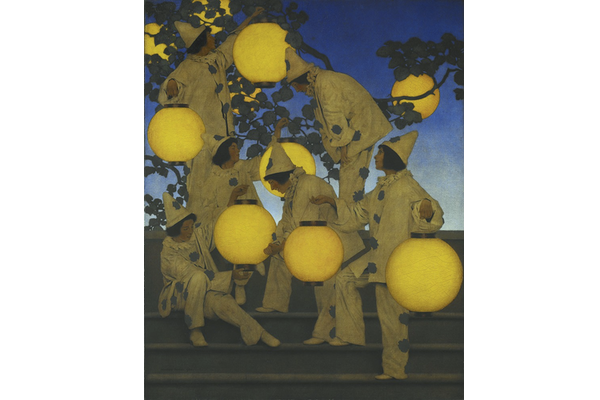 The Lantern Bearers by Maxfield Parrish

The year 1969 was a seminal twelve months in the life of the Norman Rockwell Museum, in Stockbridge, Massachusetts. The hometown of the celebrated American artist, who made the past come lovingly to life on his canvasses and magazine covers, opened the museum, mourned the closing of the Saturday Evening Post magazine, so often graced by Rockwell’s illustrations, and stood eyewitness to some of the most remembered events in American history, such as the Apollo 11 moon landing, the Woodstock, N.Y. rock concert, mud and all, the Charles Manson murders, the student rights revolution, sexual revolution and just about any revolution you could find.

The museum is celebrating the year 1969 not with an exhibit about politics or history, but one about how artists showcased their work in that one, single year. The exhibit, Woodstock to the Moon: 1969 Illustrated, that opened recently, has an unusual star – the gang from the Sesame Street television show, that debuted that year. When you walk into the first of the two exhibit halls you are face to face, in all of his glory, with the Cookie Monster. He’s busy, too, chomping down hard on the first of seven huge chocolate chip cookies. Right next to him is a series of photographs from the first year of the show, along with Sesame Street memorabilia. The light hearted Sesame Street display sets the tone for the rest of the exhibit.

The exhibit contains the art – illustrations, photographs, posters – of 1969 events.

You find out things you did not know or simply (my case) forgot, such as the fact that in 1969 the number one movie at the box office was not an acid rock movie, but a solid, good old western, Butch Cassidy and the Sundance Kid. The winner of the Oscar for Best Picture that year was none of the tried and true Hollywood hits, but an X rated movie – Midnight Cowboy (“I’m walkin’ here, I’m walkin’ here…” says Ratso Rizzo as he crossed a busy midtown New York Street).

There are numerous colorful movie posters from 1969. Everybody remembers that the hit musical Hello Dolly!, starring Barbra Streisand, debuted that year, what about the James Bond movie (“Bond, James Bond“) On Her Majesty’s Secret Service? The Wild Bunch? Once Upon a TIme in the West?  And it was the year that one of the most memorable, and funny, movies of all time, Animal House, was released.

On the personal side, I forgot that 1969 was the year the satirical National Lampoon magazine started publishing (yes, the forefather of all those movies). It was the summer four people were killed at a Rolling Stones concert at Altamount Speedway in northern California.  It was the year that Elvis Presley began his long tenure in Las Vegas, selling out 636 consecutive concerts.  And oh, yes, the cartoon character Scooby Doo made his much-remembered debut. It was also the year that Kurt Vonnegut’s wonderful off beat novel, Slaughterhouse Five, hit the book shelves.

There are posters, large and small, that celebrate many of these films with wild illustrations by the prominent artists of the day, including Rockwell. There were illustrated posters for Janis Joplin (she of the gravelly voice) concerts, television shows, movies, political races and Presidents (yes, Nixon).

There is even a quite scary magazine illustration of the Frankenstein monster for one of his long-forgotten movies.

Another part of the exhibit is a tribute to the moon landing with lots of photographs and a Rockwell painting of Neil Armstrong and Buzz Aldrin om the surface of the moon.

In the middle of one of the halls is a 1969 model television set that continually plays trailers for movies that premiered that year. There is a large and pretty comfortable sofa across from it, so you can sit back and enjoy the history and the memories.

The museum exhibit has some problems, though. First, it only fills two halls. The movie posters alone from that year it could fill the entire building. Why not make the exhibit as big as possible?

Many parts of 1969 art history are ignored. There is practically nothing from the Vietnam War and less on student campus riots. There was certainly plenty of artwork for those two epoch events. There is Sesame Street, but what about all the others shows that debuted that year? You want color and drama, what about some photos or artwork about the downtrodden underdogs, the New York Mets, who the World Series that year?

Even so, Woodstockto the Moon: 1969 Illustrated, is worth the trip to the Rockwell Museum, happily celebrating its fiftieth anniversary amid the forested campus where it sits. A look back at the artwork from 1969 is a rare chance to gather memories for many and, for younger people, learn how artists took on the army of events that happened just in that one single year. Much of what we know is from the work of artists, whether filmmakers, illustrators, painters or writers.

Besides, how can you go wrong with an exhibit that gives you, in all their glory, John Wayne, James Bond and John Belushi?

The exhibit runs through October 27. The Rockwell Museum is just off route 183 in Stockbridge, Massachusetts. The museum is open daily from 10 a.m. to 5 p.m.