Where Are the Hong Kong Protests Headed? 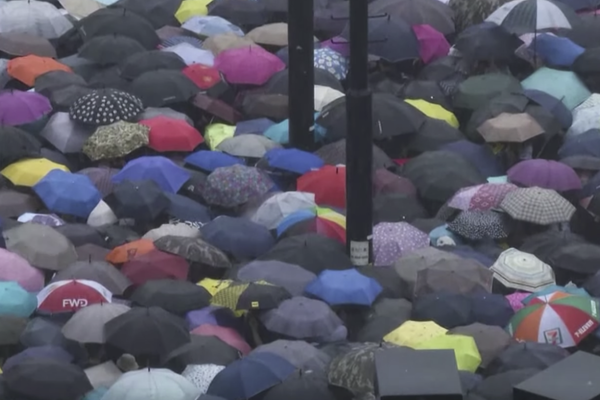 After ten weeks of protest by students and others in Hong Kong the crisis seems to be spiraling toward a tragic climax. Beginning as a protest against a proposed law to permit the extradition of criminal suspects to mainland China, the demonstrations have evolved into broader calls to safeguard—or, perhaps more accurately, restore—the semi-autonomous territory’s democracy. With China’s government now employing rhetoric like that which preceded the 1989 Tiananmen Square Massacre, Hong Kong’s pro-democracy protesters—and, indeed, its democracy—might well be in grave danger.

As the unrest moves on, the Chinese government’s toleranceis running short—and its warnings are growing more ominous. The People’s Liberation Army garrison in Hong Kong is, is in the words of its commander, Chen Daoxiang, “determined to protect national sovereignty, security, stability and the prosperity of Hong Kong.” To emphasize his point, a promotional video showing Chinese military officers in action was released with his statement.

Yang Guang, a spokesperson for the Chinese government in the Hong Kong and Macau Affairs Office, has echoed this sentiment warning the protestors—whom he called criminals “criminals”—not to “mistake restraint for weakness”.  He then re-stressed the government’s “firm resolve” to protect the prosperity and stability of Hong Kong.

Zhang Xiaoming, the director of this office took matters a step further, declaring that China’s government “has sufficient methods and enough powerful means to quell all sorts of unlikely unrest (dongluan)”. This came only two months after China’s defense minister argued that China’s stability, since the Tiananmen crackdown, proved that the government had made the “correct” choice.

Beijing’s increasingly harsh warnings against Hong Kong protesters point to both a hardening of positions, and to the rise of figures in the Chinese government who favor establishing complete control over the territory. Their position has been reflected in the response from the police force, which has been using rubber bulletsand tear gas with increasing frequency. Hundreds of protesters have been arrested; forty-four have been charged with “rioting.”

Yet far from being deterred, the protesters are challenging the Chinese government with increasing determination. In July they vandalized the outside of the Chinese government’s liaison office in the center of the city. Last week they started a general strike at the local airport that nearly paralyzed the city, one of Asia’s most important commercial hubs, causing bedlam and the cancellation of more than 150 flights. Worrying about going too far in their protests and alienating the Hong Kong citizenry, the protest leaders ended these airport strikes. Perhaps counterintuitively, this radicalization has broadened support for the movement, with members of Hong Kong’s middle class—including lawyers and civil servants—now openly supporting the protesters.

Seeing that their stark warnings are ineffective, China leaders may well be sensing that the best—or maybe the only way to restore their authority in Hong Kong, is by force. Of course, if Xi Jinping chooses the option of violently suppressing the protests, the international optics for him and his country would be terrible. China would look like a heavy-handed oppressor. Or, he may choose to wait until the celebrations for the 70th anniversary of the founding of the people’s republic on October 1 to act.  Is a crackdown now or in two months the answer?

Moreover, there is no guarantee that such a crackdown would succeed. To begin, Hong Kong’s 31,000 strong police force is not up to the task. It lacks manpower and its officers might refuse to use deadly force. After all, there is a significant difference between firing rubber bullets at a crowd and slaughtering civilians. China would have to use the local People’s Liberation Army (PLA) garrison or transfer tens of thousands of paramilitary soldiers, the People’s Armed Police (PAP) from the mainland. (Chinese state media has released video showing that a large PAP contingent has been deployed in the city of Shenzhen bordering on Hong Kong).

Hong Kong residents, (only 10% of whom consider themselves Chinese), almost certainly would resist. The resulting clashes would probably result in a high number of civilian casualties and effectively mark the official end of the “one country, two systems” agreement of 1997. Beijing would be forced to assert full and direct control over Hong Kong’s administration.

Once the Hong Kong’s governments legitimacy is destroyed, the city would immediately become ungovernable. Civil servants would quit their jobs in great numbers. Hong Kong’s complex communications and logistics systems would also be at risk for disruption by defiant locals.

After the Tiananmen crackdown, the Chinese Communist Party’s (CCP) ability to re-establish control rested not only on the presence of tens of thousands of PLA troops, but also on the mobilization of party members. In Hong Kong, where the CCP has only limited organizational presence (officially, it claims to have none) This would be impossible. Moreover, given the large number of Hong Kong residents employed in private businesses, Beijing could not control them as easily as mainlanders who depend on the government for a living.