The Stasi's Cold War Espionage Campaign Inside the Church

Elisabeth Braw, a former journalist, leads a program at RUSI (the UK defense and security think tank) and regularly writes op-eds for the Wall Street Journal, the Financial Times, The Times (of London), and other publications. Elisabeth, a native of Sweden, visited East Germany beforeand after the fall of the Berlin Wall, eventually attending university there. 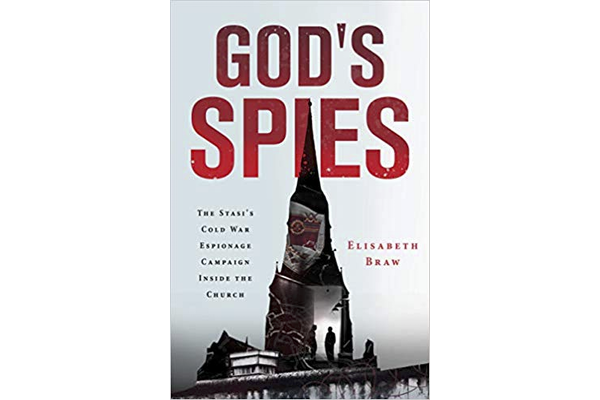 We remember them: the East German church peace prayer meetings that, 30 years ago, grew and grew, spilling out into the streets and setting in motion protests too large for the government to contain. That November, the protests led to the fall of the Berlin Wall. It feltlike the victory of peace prayer participants over a ruthless regime. But for four decades, the Stasi had managed to prevent that very outcome.

Ever since East Germany’s birth on 7 October 1949, the country’s churches had been the regime’s particular foe. Not only did they represent a worldview at odds with the atheism the regime stood for; they also had countless connections to fellow Christians abroad, including in Western countries. On top of that, one of the country’s denominations -- the Lutheran Church -- was a powerful institution, comprising not just a large part of the population but also pastors prepared to speak out against the government. When the Stasi, the Ministry for State Security, was created in 1950, keeping an eye on the country’s churches and their members became one of its central tasks.

How do you keep an eye on Christians to prevent them from voicing demands such as free and fair elections? The Soviet Union took a brutal approach, sending countless Christians to penal camps on trumped-up charges. The Stasi’s church department, by contrast, opted for a more cunning approach (after a relatively brief Soviet-inspired experiment). “Let them pray, let them sing, but they shouldn’t do politics,” Joachim Wiegand told me.

You have probably never heard of Wiegand. That’s because he was a Stasi officer, a man operating in the shadows. During the final decade of the German Democratic Republic’s existence, he led the Stasi’s church department, called Department XX/4. He has never before been interviewed for a book; like most Stasi officers, he – probably correctly – surmises that any interviewer will misconstrue his words. To my great surprise, Wiegand agreed to be interviewed for my new book about Department XX/4’s activities, God’s Spies (published by Eerdmans on September 17). Wiegand and I spent countless hours together, discussing every detail of how Department XX/4 worked to prevent East Germany’s Christians from doing politics. After that initial period of focusing on punishment, Department XX/4 mostly relied on seduction. It got clerics – from bishops to pastors-in-training -- and other Christians to become agents.

Imagine the setting: a secret police agency, staffed by men with impeccable proletarian credentials but no church connections, trying to convince pastors to join the Stasi as agents. (The Stasi’s word for such undercover agents was Inoffizieller Mitarbeiter, IM.) Like other Department XX/4 officers, Wiegand -- a former farmhand who had been one of the first graduates of the Stasi’s training school -- learnt churches’ terminology and structures. He identified which pastors could be suitable recruitment targets: perhaps they were frustrated with the slow advancement of their careers; perhaps they wanted advantages such as foreign trips. Before even making the initial contact with a pastor, Wiegand and his colleagues had conducted thorough research on the potential recruit, aided by input from existing IMs.

When a pastor had signed on the dotted line, he reported on whichever setting he found himself in. Some pastors needed more guidance from their case officers than others as to what sort of material might be useful to the Stasi, but the result was a vast collection of reports. Pastors reported on members of their congregations, on their fellow clerics, on international faith organizations. They told Department XX/4 which decisions church leaders were planning to make; sometimes they even influenced those decisions in a Stasi-friendly direction. And all along, they had to worry about other pastor agents in their midst. Because nobody knew who else was working for the Firm, everyone might be doing so. It was a hall of mirrors. And all along, Department XX/4 collected the agents’ reports. Nothing was too small to be documented, not even the style of beards certain theology students wore: it indicated a willingness to rebel against the regime.

But despite their frequently gossipy reports, the pastor agents were instrumental to the survival of the German Democratic Republic. Because churches formed the country’s only semi-independent space, opposition-minded citizens of all stripes took refuge in churches’ seminaries, their environmental groups, their peace prayer meetings. If the Stasi was to prevent discontent from festering in churches around the country, its pastor agents had to keep a very close eye indeed on their fellow Christians.

In God’s Spies, I follow the ecclesiastical-and-intelligence careers of four of those pastor agents. One, an academic who felt overlooked, spied for career purposes, badmouthing his peers while touting his own horn. Another became a rare pastor agent on permanent foreign assignment. A third masterfully combined a career as a pastor-and-church journalist with undercover duties; all in the name of helping his country survive. As East Germany was collapsing, an American Christian magazine published an article by the pastor, its editors clearly in the dark about his dual affiliation. A fourth pastor deviously infiltrated Western Bible-smuggling groups, preventing the books from reaching their destination and endangering the lives of the intended recipients.

Department XX/4 achieved great success: without its infiltration of every corner of East German Christianity, the church-led protests would likely have gained steam much earlier. Would the Berlin Wall have fallen earlier too? It is, of course, impossible to tell. But through their diligent work, the Stasi’s pastor agents – who have never before been the subject of an English-language non-fiction book – played a vital role in helping the German Democratic Republic limp along until its 40th birthday. On that day, Mikhail Gorbachev dutifully attended his fellow Socialists’ proud celebrations. Two days later, on October 9, record numbers of Leipzigers attended the peace prayer meetings in their city, then marched through the city. A month after that, the Berlin Wall fell. No snooping in the world could have saved a country as unwanted by its citizens as East Germany.