A Gallon of Talk and a Teaspoon of Action, Then Label the Problem "Insolvable" and Plan Another Conference

Robert Scott Kellner is a retired English professor who taught at the University of Massachusetts and Texas A&M University. He is a navy veteran and member of the American Legion. The grandson of Friedrich Kellner, he published the diary in its original language in Germany in 2011 and is the editor and translator of the English edition, My Opposition: The Diary of Friedrich Kellner--A German against the Third Reich, Cambridge University Press, United Kingdom, 2018 (paperback edition January 2020). 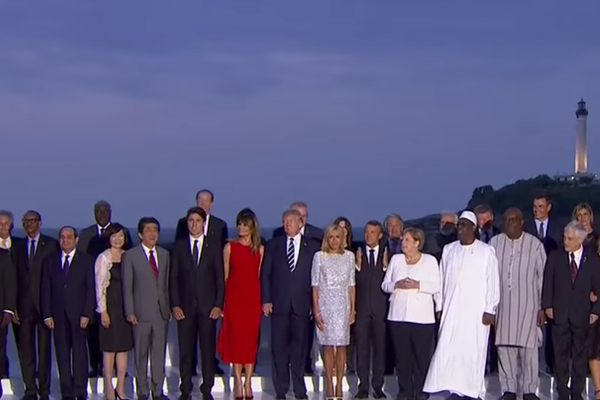 There is an increasing element of the burlesque as world leaders jealously vie for the front row in photographs at annual summits where problems are solemnly addressed but seldom solved. They mulled over trade last June in Osaka. Then climate talks in Biarritz. At the end of January 2020 photographs were posted from Jerusalem where more than forty world leaders deliberated upon a malicious phenomenon that began in that ancient city two thousand years ago on a hill named Golgotha.

What shall it avail, the latest speech-laden conference on this topic, when seventy-five years of intensive Holocaust education had no effect on Holocaust deniers and could not stop the resurgence of the virulent anti-Semitism that had infected Germany one hundred years ago?

"Tiresome talk and tokens of sympathy without follow-up action!" scornfully wrote the German justice inspector Friedrich Kellner in his assessment of the impotent League of Nations and the short-sighted democratic leaders of his time who did nothing to thwart Adolf Hitler's plans for totalitarian rule over Europe. "Where were men who could recognize the reality?" asked Kellner. "Did they not see the tremendous re-arming of Germany when every German illustrated newspaper had pictures that exposed everything? Every small child here knew at least something about the armament. And the entire world looked on! Poor world!"

As an organizer for the Social Democratic Party, Kellner had campaigned against Hitler and his Nazi Party throughout the entire time of the ill-fated Weimar Republic. When Hitler came to power, Kellner began a diary to record Nazi crimes and the German people's overwhelming approval of the murderous agenda. His outspokenness against the regime marked him as a "bad influence" and he was placed under surveillance by the Gestapo. His position as a courthouse administrator gave him some protection from arbitrary arrest.

"The French watched calmly as Hitler re-armed Germany without having to suffer any consequences," wrote Kellner about the Allies' failure to respond decisively to Hitler's threats. The British were equally guilty. "Neville Chamberlain should have been a parson in a small village, not the foremost statesman of a world power who had the duty and obligation to immediately counter Hitler."

"The Western nations," he declared, "will carry the historical guilt for not promptly providing the most intensive preventative measures against Germany's aggression. When German children were being militarized at the age of ten, and legions of stormtroopers and the SS were being formed, what did their Houses of Commons and Senates undertake against this power?"

Kellner regarded Winston Churchill as one of the rare men who did see the reality, who might have preempted the war had he received the reins of government sooner. In his memoirs, Churchill labeled the six years of brutality and terror as "The Unnecessary War" -- a sobering and infuriating epitaph for the tens of millions of victims who needlessly lost their lives.

The justice inspector reserved a special contempt for nations that claimed neutrality while their neighbors and allies were under attack. Sweden and Switzerland grew rich providing Germany with raw materials. In June 1941, as Hitler ruled over a conquered Europe, Kellner derided Americans -- including the celebrated aviator Charles Lindbergh -- who insisted Hitler could be assuaged by diplomacy. "Even today there are idiots in America who talk nonsense about some compromise with Germany under Adolf Hitler. . . . Mankind, awake, and concentrate all your strength against the destroyers of peace! No deliberations, no resolutions, no rhetoric, no neutrality. Advance against the enemy of mankind!"

Six months later, after the attack on Pearl Harbor, he wrote, "Japan shows its mean and dishonest character to the world. Will the isolationists in the U.S.A. now open their eyes? What a delusion these cowardly people were under. When you stand on the sidelines claiming neutrality during a gigantic fight for human dignity and freedom, you have actually placed yourself on the side of the terrorist nations."

Despite his call for preemptive action against dictators plotting war, Friedrich Kellner knew war firsthand and abhorred it. In 1914, as an infantry sergeant in the Kaiser's army, he was wounded in battle. He highly valued diplomacy and preferred political solutions to the world's problems. For twelve years he campaigned politically as a Social Democrat. But Adolf Hitler showed the futility of diplomacy and politics when it comes to fanatics whose ideologies and dreams of dominion would undo centuries of civilization.

We are seriously challenged by such types today. Protected by their totalitarian patrons, Russia and China, the leaders of Iran and North Korea spread disinformation, terror and chaos throughout the Middle and Far East. They openly threaten terror attacks -- and even nuclear strikes -- against the democracies.

Ironically, France and Germany, intent on maintaining business relations with these countries, have led the European Union these past three years in resisting the USA's renewed sanctions against Iran. As Winston Churchill said of the neutral nations in 1940, "Each one hopes that if he feeds the crocodile enough, the crocodile will eat him last."

Conferences and speeches, and promises by world leaders to never forget the Holocaust, will neither impress nor dissuade modern aggressors. What was needed in Jerusalem was a unified pledge to immediately apply strong and unrelenting economic sanctions against these nations, and to encourage and assist the people in Iran and North Korea to stand up against their own dictators. And they needed to emphasize it would be the only way to deter further military action, such as the recent missile attack that killed the Iranian terrorist mastermind Qasim Sulemeini.

Our leaders should reflect on the observations of a German patriot who did his best to keep a madman from seizing power in his nation, and who saw with despair how the democracies let it occur. He wrote his diary as "a weapon of truth" for future generations, so they could stop their own Nazi-types.

"Such jackals must never be allowed to rise again," he said. "I want to be there in that fight."