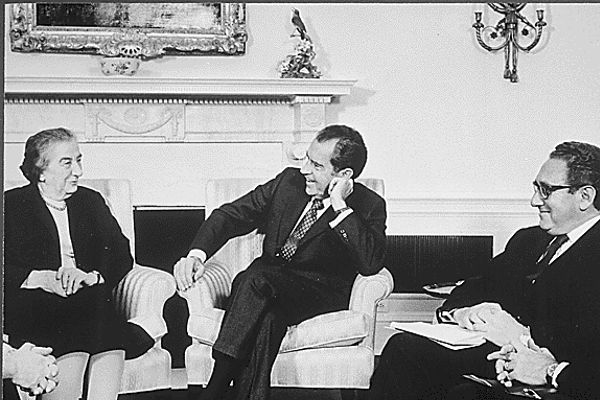 A CNN poll at the time of the New Hampshire primary revealed that 30 percent of voters believed a female Democratic nominee would have a harder time beating Donald Trump than a male nominee would. As the number of women in the field dwindled from six, to two, to zero, in an election cycle that had been widely discussed as a possible referendum on women’s empowerment, a question emerged, generally implicit but still present:  will voters trust a woman to lead the nation in time of war?

The potential for a woman to wield ultimate power in a field jealously guarded by men for centuries was answered, though not definitively, in 2016. Nearly 66 million citizens voted for Hillary Clinton to be their military commander-in-chief, three million more than voted to give that authority to Donald Trump. Matters of war are certainly not the only election issues. But the absence of a woman war leader is remarkable for a country that has stood on democracy’s cutting edge since its founding and has been engaged for decades in nearly continuous armed conflicts abroad—while many other countries have looked to women for wartime leadership.

Among modern leaders, none played for higher stakes than a Jewish grandmother named Golda Meir. She helped coordinate Jerusalem’s defense during Israel’s war of independence in 1948, served as foreign minister during the 1956 Suez War, and informally advised the government during the 1967 Six-Day War. Two years later, she became Israel’s first female prime minister. In a country in a constant state of war, she received many of the sort of the middle-of-the-night calls that were portrayedprominentlyand ominouslyin American campaign commercials in 2008.

On October 6, 1973, one of those calls informed her that Syria and Egypt would be launching a full-scale attack that very day—Yom Kippur, the highest of holy days. Golda’s military advisors recommended a strategy that had proved so successful in the past: a preemptive air strike against Syrian and Egyptian airfields. Years of war had hardened Golda to the reality of life surrounded by enemies. “Are we supposed to sit here with our hands folded, praying and murmuring, ‘Let’s hope that nothing happens?’” she asked one interviewer. “Praying doesn’t help.

What helps is to counterattack. With all possible means, including means that we don’t necessarily like.”

Yet as a statesman, Golda also had to focus beyond the war’s opening salvos. Israel depended upon the United States for ammunition, aircraft and replacement parts, and a first-strike by Israel would jeopardize relations with its superpower patron. Haggard from stress, she forbade her commanders from launching a preemptive strike. For the war’s first few days, Israel’s survival hung in the balance. Its army lost a quarter of its tanks and an eighth of its fighter-bombers. Israel’s defense line in the Sinai began cracking, and Syrian troops made inroads along the Golan Heights. Should either attacker have broken through Israel’s thin green line, its heartland would have beenwide open to attack.

Golda spent several anxious days playing the parts of strategist, diplomat, and cheerleader. Chain-smoking, gulping a gallon of coffee each day, the 75 year-old woman stiffened the badly-shaken spirits of her defense minister, the veteran general Moshe Dayan. When Dayan asked Golda for permission to assemble Israel’s nuclear weapons, Golda refused. The battle would be fought in the Sinai and Golan Heights, but the war would be won—or lost—by the support of Israel’s friends. There would be no nuclear option. Shadowing Golda as she reviewed military reports with Dayan, the defense editor of the Israeli newspaper Ha’retz wrote, “It was strange to see a warrior of seven campaigns and brilliant past chief of staff of the IDF bringing clearly operational subjects to a Jewish grandmother for decision.”

With U.S. supplies and Israel’s reserves taking the field, the tide of battle turned. Israeli troops threw back the Syrian’s on the Golan Heights and surrounded an Egyptian army in the Sinai. On October 29, less than a month after the war began, Israeli commanders met their Egyptian counterparts under a tent stretched across the guns of four parked tanks. They negotiated a withdrawal of Egyptian forces on terms that permitted Egypt’s president Anwar Sadat to save face and, in time, negotiate a lasting peace with Israel.

Golda’s was just one chapter in a rich history of women leading their nations in wartime. In ancient times, Egypt’s Cleopatra and Tomyris of the Massagetae led their nations against the superpowers of their day. In the Middle Ages, Queen Manduhai of the Mongols reclaimed a chunk of Genghis Khan’s Empire about the time that Marguerite d’Anjou, wife of England’s King Henry VI, rallied the Lancaster faction in the Wars of the Roses. Elizabeth Tudor turned back the Spanish Armada, Queen Njinga ravaged Portugal’s slave-trading outposts in Angola, and Catherine the Great led her nation to victory against the Ottoman Empire, Sweden and Poland. In the Age of Democracy, Indira Gandhi resortedto war to solve a humanitarian crisis in Bangladesh, and Margaret Thatcher ejected Argentine invaders from the Falkland Islands.

These examples suggest sex is no bar to effective political leadership of a country at war, or of leadership over military forces. Indeed, comparatively few male American presidents have boastedhigh-level military expertise when confronted with a decision to go to war. Our historical bias in favor of male leaders in wartime will come to a close, sooner or later.and the next generation of conflicts may find the United States led, capably and competently, by a commandress-in-chief.