What About the Waitresses?

Alison Owings, www.alisonowings.com, is the author of Hey, Waitress! The USA from the Other Side of the Tray. She is finishing her latest work, an oral history about a formerly homeless man: The Book of Del: Scenes from a Life Before, During, and After Homelessness. She urges readers to patronize their local independent book sellers, which can be found at www.Indiecommerce.org. 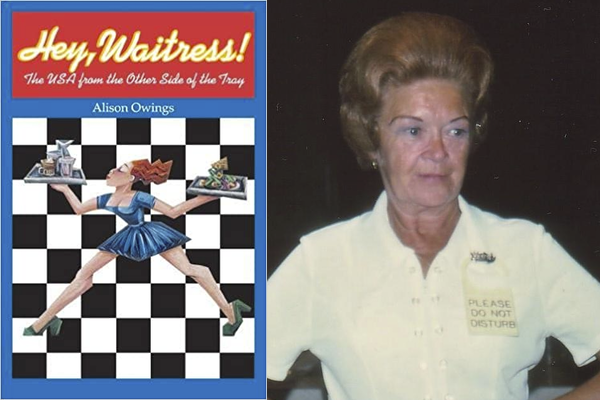 Erica S.’s post on Nextdoor.com read, “Are you a bartender or restaurant worker who is financially struggling because your work is shut down right now? If so I have a $25 gift card from the amazing Le Beau market for you!” Among the hopeful respondents was Kira M., who praised the market, and added that she “was laid off from both my server jobs this week.” As the thread wove on, Erica revealed that her impetus for giving came from a friend who asked his friends to celebrate his birthday by supporting someone in the restaurant/retail industry. She had been given the gift card she was donating, but “what the heck,” she’d match it, while others chimed in that they would buy gift cards from Le Beau to donate, too.

These mostly upbeat exchanges came from San Francisco’s wealthy Nob Hill enclave, where in the past residents have posted inquiries about such matters as finding a superior tailor to alter expensive trousers. And nanny shares --- many many nanny shares.

Farther down the economic food chain from Erica S’s post came a memory emailed to me a few minutes later. Diana, a friend and (happily) former waitress, recalled she used to make half the minimum wage – the myth being that tips would make up the rest. This was very familiar territory to me, for it echoed the  conclusion from a book I spent years researching and writing: Hey, Waitress! The USA from the Other Side of the Tray.  I interviewed waitresses from low ends to high, from a Maine seafood spot to the Tohono O’odham Indian Reservation in Arizona, from Seattle fine dining to the Florida Everglades, and points in between, including some memorably disgusting places where my friend Diana and others had worked (one New York waitress recalled her manager stirring his coffee with his penis. She added, the coffee never was very warm.).

If I added my hours, as waitresses add their tips, my guess is that some 40 interviews yielded 100+ hours of candor, insights, an overall reflection of the United States for worse and for better, and a litany of piques. Two piques topped the list. The emotional-sociological winner was classism, waitresses being treated as if they were lesser beings than were their hungry customers. The economic (if also emotional-sociological) winner was, no surprise, tipping.

Server after server described what I came to believe is the central problem with tipping:  it turns customers into employers, and not every customer employs well. Problem with your meal? Don’t blame the manager, the chef, the line cook. Instead, stiff the waitress. Plus, her smile seemed insincere.

Wherever they worked, though, the majority of American waitresses now might be (or soon will be) out of work. The Federal Reserve Bank of St. Louis recently estimated that 13.3 million workers in food preparation and service jobs are at high risk for layoff. The Pew Research Center reports a slight majority of these are women.

I especially worry about the waitresses. Some, presumably, are helping with the semi-new semi-normal of readying take out meals. How do tips work their way into that equation? Do the “subtract the taxes and the drinks before tipping” doofuses figure no tip is required now anyway? As an extension of take out, some waitresses apparently have become home deliverers of the meals, either handing over the bag of pad Thai or, as some recommend, leaving it at the door of the recipient. No touching. So, no tipping? The distance, the facial anonymity, would seem to protect the tip-challenged from the generous.

What about tipping in advance? That is also alien to the world of waitressing as I know it. Good waitresses – again, those I’ve met—believe that their tip-increasing strategies were successful, that their professionalism or their ruses worked as hard as they did. (And it brings to mind the stigma attached to prostitutes, who generally get paid first, an element of cultural sexism that continues to impact waitresses).

Indeed, think of what a laid off waitress does not have to endure on her job site, particularly from strangers: unwelcome touches, insulting comments. “Where’s the pretty one who waited on me yesterday?” “What else do you do?” My favorite retort, if apocryphal, to “What time do you get off?” was “Oh, about an hour after I get home.”

Such deflections are but one of the skills of effective servers. Virtually all waitresses who spoke to me indicated the pride they took in at least some aspect of the work, including getting better tips (hate the tipping, love the tips?). One way was to comp their regulars a piece of pie now and then, or up the tab to those two ladies having lunch (hint: suggest dessert, while mentioning to-go bags are at the ready for your unfinished entree). Some waitresses all but boasted they knew how to calm the cook, or manage the computer. And maybe -- no, often – they simply did their job well, knowing how much their regulars treasured them. Waitresses were often the fulcrum of the neighborhood.

As I think of the women I met, I wonder about today’s waitresses, including a sweet young Frenchwoman at my local bistro, who smiles gamely at every uttered “mercy” trying to be “merci.” The bistro serves only take-out only, now. Will unemployment checks cover gratuities? Je pense que non.

I wonder if some of the many laid-off waitresses will re-assess the job, and what they like or don’t like about it, if the unplanned distance changes their perspective. If they return to the same work, or if the work is available again, will some waitresses, as a group wildly varied in their spending habits (if all famously generous as tippers), start saving for another rainy day? Or does that apron pocket of tips demand to be spent immediately?

I wonder too, if – when – this viral horror is over, customers will have a new appreciation for the women, and men, who serve.

Meanwhile, my former waitress friend, Diana, also wrote me in the email about a friend of hers, a poker dealer now laid off from California’s casino shutdowns. “She is scrambling and just applied for food assistance. Her teens are going to school every day to pick up the free lunch available.”

Readers interested in support for restaurant workers may learn about one national effort at rerf.us.