Andrew Meyer is Professor of History at Brooklyn College and translator of The Dao of the Military: Liu An’s Art of War (Columbia University Press). 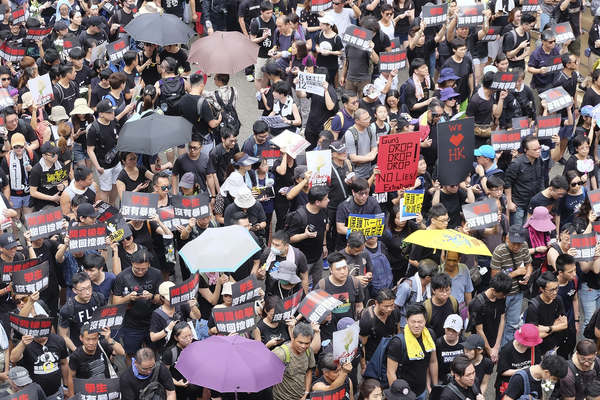 The imposition of new “security” laws on the semi-autonomous city of Hong Kong by China’s National People’s Congress is undoubtedly a watershed event in the history of East Asia and of global affairs more generally. Hong Kong has been a key driver of the “economic miracle” that has transformed the People’s Republic of China since that nation first moved to liberalize its economy in 1979. Even while Hong Kong remained a British colony, it was an important gateway through which hard currency and foreign investment flowed into mainland Chinese markets. After the repatriation of Hong Kong to Chinese sovereignty in 1997, the role of the city and its economy became even more integral to the maintenance of economic growth nationwide.

All of that is now at risk. The danger to the fragile homeostasis that has prevailed between the Chinese Communist Party and the Hong Kong private sector has been acutely imperiled since the mass protest movement in response to new “extradition laws” sought by Beijing first broke out last year. But until now a dynamic stalemate has held between the protesters and Beijing, each keeping pressure on the opponent without risking an “all or nothing” provocation. The new security laws are almost certain to bring the situation to a head. If enforced, they will definitively end the “one country two systems” entente that has underwritten the social contract of Hong Kong and its relationship with the rest of the PRC since 1997.

Why is this happening now? Much of the commentary on these events in European and American media has focused on shifting geopolitical power dynamics. China is rising, so goes this line of analysis, and as a consequence it feels confident to “flex its muscles” in defiance of “Western” interests. Add to this the fact that the global pandemic has distracted the EU and the US, and Beijing’s motives and opportunity seem clear. The CCP’s maneuvers in Hong Kong seem part of a larger pattern that includes aggression in the South China Sea and toward Taiwan, intransigence in trade negotiations, repression in Xinjiang and Tibet.

There is some merit to such analysis. But an overemphasis on the “China’s Response to the West (the title of a source anthology edited by John K. Fairbank and Teng Ssu-yü, Harvard University Press 1954)” paradigm overlooks the important ways in which Chinese policy in Hong Kong is driven by domestic political tensions. Among the reasons that Beijing has refrained from cracking down in Hong Kong, fear of the displeasure of “the West” is the least significant.

Hong Kong has been both an asset and a liability to Beijing since 1997. Its benefits as an asset were mentioned above: Hong Kong was, and remains, one of the wealthiest cities in China, and as a financial center has fostered growth that has broadcast prosperity throughout the PRC. But at the same time, Hong Kong’s autonomy has posed dangerous challenges to the delicate matrix of Chinese political culture. Hong Kong Chinese are free to engage in speech that would result in imprisonment (or worse) if undertaken in Wuhan or Beijing. The annual candlelight vigils that are held every June 4 to commemorate the massacre that brought the Tiananmen Square protest movement to an end are only the most ostentatious flouting of Beijing’s official line. More subtly subversive messages are carried by Hong Kong media constantly, and as the economy of China has liberalized, it has become increasingly difficult for Beijing to prevent PRC citizens from being exposed to them.

Some of Beijing’s belligerence might thus be motivated by a simple shift in the cost-benefit dynamic of Hong Kong-PRC relations. As China becomes wealthier and Hong Kong’s GDP accounts for a smaller share of the nation’s wealth, the economic benefits of Hong Kong’s markets are perceived as shrinking relative to the political liabilities of the city’s subversive culture. This may indeed help explain some of the resolution on the part of Hong Kong’s protesters. They understand that this may be the last moment at which Hong Kong’s economic preeminence gives its people enough leverage to force concessions from Beijing.

But the dwindling economic leverage of Hong Kong does not fully explain why Beijing has chosen to cross the Rubicon now. It is not just that the fiscal and financial benefits of Hong Kong have diminished, it is that the political threat of Hong Kong has become acutely dire. Why is this so?

The reforms begun in 1979 unleashed many diverse aspirations of China’s citizenry. Deng Xiaoping, who had just risen to lead the CCP, encouraged efforts to foster prosperity and promote technological progress. But dissidents like Wei Jingsheng pushed for more ambitious political change. In a famous manifesto pasted to Beijing’s short-lived “Democracy Wall” Wei called for a “fifth modernization,” a transition to democracy, to complement the “four modernizations (to agriculture, industry, defense, and science)” advocated by Deng Xiaoping.

Wei and his fellow dissidents were silenced, but the ambitions they gave voice to resurfaced periodically over the next decade, culminating in the Tiananmen Square movement that swept China in the spring of 1989. The violent repression of that movement, in which thousands were killed by units of the People’s Liberation Army in Beijing, Shanghai, and other major cities, effectively drove democracy activism underground or to the margins of political culture, where it has remained ever since.

But the tensions that gave rise to the Tiananmen movement have never disappeared. Rather, they have been sublimated by a tacit agreement that has stabilized the PRC social contract for more than two decades. Though calls for democracy were silenced after 1989, so were those reactionary elements of the party that had been militating for a return to the dogmatic economic and cultural policies of the pre-Deng era. Hard-liners were purged, and power invested squarely in the hands of technocratic reformers like Jiang Zemin, Hu Jintao (and Xi Jinping, who for all his “strong man” maneuvering bears more resemblance to his recent forbears than he does to old-school ideologues like Li Peng or Chen Yun). The Party effectively entered into a tacit compact with the Chinese people: unrestrained economic growth would be maintained in exchange for the relinquishment of calls for democratization or power-sharing.

This “economic peace” has held, in large part because the liberalization of the Chinese economy has paid spectacular dividends. China has enjoyed economic growth in excess of 6% annually for each of the past nineteen years (reaching in excess of 10% for ten of those years). The rising tide of prosperity has created a middle class that, in absolute terms, is as large and as wealthy of that in the United States.

That homeostasis has never been as imperiled as it is right now. As a result of the pandemic and the attendant global recession it has set in motion, China is certain to see a steep decline in economic growth, perhaps the first significant recession the Chinese economy has experienced since the days of the Cultural Revolution. The current crisis is the most dangerous political moment that the CCP leadership has confronted since 1989.

That is the subtext of Beijing’s aggression in Hong Kong. It is not born of confidence or a desire to flout “Western” power. Rather, a move to shatter the fragile financial ecosystem of Hong Kong (and the economic benefits it provides to China’s markets) is rooted in political insecurity. Economic pain has become unavoidable, it is heading toward the PRC (and the rest of the globe) like a runaway train. In the face of that inevitability, Beijing is compelled to cauterize the few remaining sources of political dissidence that could form the nucleus of a new wave of anti-Party activism.

The protesters in Hong Kong are on the right side of history, and they deserve the support of the outside world. But much of the rhetoric that will no doubt surge forth in coming months, here in the US and elsewhere, has little basis in the material facts of China’s political economy. Fears of a “newly assertive” China have some empirical basis, but such fears are fueled as much by the political interests of populist politicians in “the West” as they are by conditions on the ground in East Asia.

Moreover, “China scare” rhetoric serves the designs of the CCP leadership as well as they serve those of a figure like Donald Trump. Reading Beijing’s repression of Hong Kong as “strength” provides political cover to the vulnerabilities driving CCP policy. The next days will be very revealing. As the anniversary of June 4 descends, the degree of repression applied in Hong Kong by CCP leaders will provide a clear index of the level of fear prevalent in Beijing. We are going to hear much in the near future about the dangers of Chinese ambition. World leaders would be well advised, however, to prepare for the dangers of internal Chinese instability.