This Independence Day, Celebrate and Carry On America's Past Generosity

William Lambers is an author who partnered with the UN World Food Program and Catholic Relief Services on the book Ending World Hunger. His writings have been published by USA Today, Baltimore Sun, Columbus Dispatch, History News Network and many other news outlets. 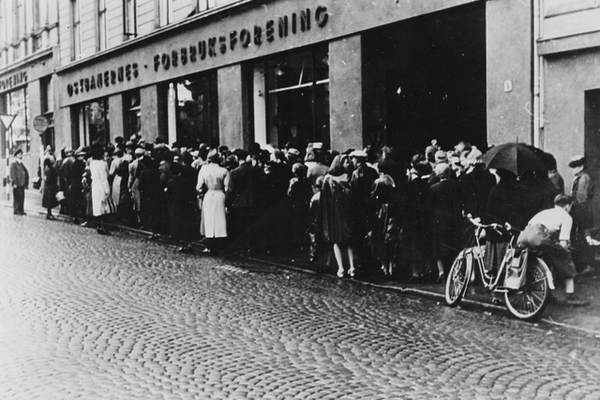 Under the cover of darkness in Nazi-occupied Norway, a package is brought to a woman whose husband had been taken prisoner. The box is filled with food, clothing and medicine for this mother of six children.

Whomever dropped it off has long disappeared into the night. But this mother appreciates the stranger more than anyone at that moment.

"I shall never forget when a stranger brought me a large package. At last, only by tears could I express my gratitude," she would write.

During World War II, many packages were delivered throughout Norway by mysterious couriers. It was part of a secret underground network dedicated to bringing food "illegally" to those in desperate need.

This was aid delivered to those most oppressed by the Nazi German occupiers. The Nazis made it routine to plunder the country of resources leaving Norwegians, especially families of those who resisted, to suffer. The Nazis placed limits on the amount of supplies that could come into Norway, making the secret relief operation quite necessary.

Imagine the joy expressed by Norwegians living in poverty and occupation to get one of these boxed miracles. Messages of thanks were collected by pastors involved. One recipient would write "This I shall never forget; It was like a Gift from Heaven.”

Another Norwegian wrote “I am staying with my sister, who is suffering from tuberculosis, and now I can give her the food she needs.”

Where did these life-saving boxes come from? They were prepared in Sweden, and stored close to the border with Norway.  Pastors, who had fled Norway once the Germans took over, were among the main organizers of this secret humanitarian relief.

The American Legation in Stockholm and others provided support in Sweden for preparing the food, clothing and medicine into packages.

The boxes were then hidden in wagons or trains to avoid detection by Nazi patrols once they crossed into occupied Norway.   Brave volunteers made the daring runs into the Norwegian countryside. Some boxes were moved by boat.

To be caught by the Nazis meant certain jail or worse. This is why the work was done under the cover of night. Pastors, nurses and other trustworthy citizens made the final deliveries to impoverished Norwegians.

But there was another element to this help for Norway. That can be traced all the way back to America with the National War Fund that collected donations to finance the daring missions. The charity American Relief for Norway, which was part of the War Fund, thrived because of the generosity of Americans.

These funds were forwarded to Sweden to help power the underground humanitarian movement.

Norwegian Pastor Sophus Norburg wrote “On behalf of the suffering people of my county, who have benefited by this help, I send heartfelt thanks to American Relief for Norway, whose financial support has made this relief activity possible.”

As we celebrate America’s birthday on July 4th, let’s remember how our nation’s generosity has aided many hungry and oppressed people around the world.

We must never lose that caring spirit which makes our nation a symbol of hope everywhere.  This American humanitarian tradition is sacred and must be carried forward.

We have a special bond with all poor people around the world who are struggling to get food and other basics. We will not forget them in their time of greatest need. That is the American way of giving.

Actions we take at home today can lead to life-saving food tomorrow for a victim of war, disasters or poverty in a land far away.  This charitable spirit is something truly special we can celebrate on Independence Day and every day.