Who Opened the Door to Trumpism? David Frum's "Trumpocalypse" Reviewed 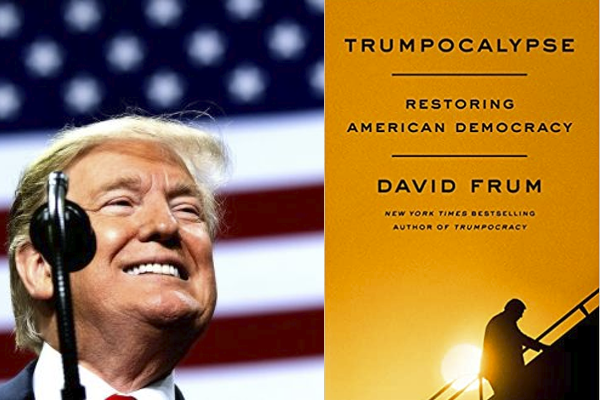 David Frum is among the most well-known conservative Never Trumpers.  His columns in the Atlantic and appearances on television and podcasts are filled with insightful and cutting criticism of Donald Trump’s policies, personality, and character (or lack thereof).  In his new book, Trumpocalypse: Restoring American Democracy, he offers more of the same, oftentimes presented in witty, pithy prose.  He asserts that Trump, despite all of his obvious flaws, was able to gain control of the Republican Party and win the presidency by walking through an “unlocked door” that was in many ways left open by American conservatives:

I came of age inside the conservative movement of the twentieth century.  In the twenty-first, that movement has delivered much more harm than good, from the Iraq War to the financial crisis to the Trump presidency.

As a former speech writer for George W. Bush with considerable conservative bona fides, Frum is in a unique position to give a full accounting of just how conservativism fell short before the 2016 election, and offer a compelling path forward for conservatives eager to reclaim their movement.  Unfortunately, he does neither.

Frum is at his best when he is attacking Trump’s personal corruption, highlighting his failures as a businessman before becoming president, and his use of the office for his own financial and political gain.  He characterizes Trump as a low-grade grifter as opposed to someone trying to score, dare I say, “bigly”:

Net-net, how much can Trump have pocketed from Vice President Pence’s two-day stay at Trump’s Irish golf course? How much from the Secret Service renting golf carts at Trump golf courses? How much from Air Force officers being billeted at the Turnberry in Scotland? How valuable were Ivanka Trump’s Chinese trademarks, really?

Never one to miss twisting the knife, he then scornfully notes that Trump has probably dishonestly extracted roughly $4 million “less… than Michelle Obama earned from her book and speaking fees.”

Frum also catalogues and assails Trump’s long history of trafficking in racist discourse, from his promotion of birtherism to his insinuation that Barack Obama was an ISIS supporter to his inexplicable equivocation after the 2017 neo-Nazi march in Charlottesville.  In a curious twist that reflects Frum’s frustration over Trump’s weathering of the Russian scandal, he devotes more attention to criticizing Robert Mueller’s failure to dig deeper into Trump’s ties to Russia than he does to the scandal itself.

When the students poured into Tiananmen Square, the Chinese government almost blew it.  Then they were vicious, they were horrible, but they put it down with strength.  That shows you the power of strength.  Our country is right now perceived as weak…as being spit on by the rest of the world.

Frum explores the corrosive impact of Trump’s strange and twisted “bromances” with brutal dictators like Kim Jong Un (“We fell in love”), Vladimir Putin (“I think in terms of leadership he’s getting an A”), and Mohammed Bin Salman (“He’s a strong person.  He has very good control…I mean that in a positive way”).  Such praise has emboldened wannabe dictators from the Philippines to Hungary to Brazil, and dismayed the democratic allies of the United States.

Through his long analysis of Trump’s follies, Frum never develops his contention that twenty-first-century conservatism helped open the door for Trump.  He notes the Iraq War as a factor, but as the man who wrote the “Axis of Evil Speech” that became the justification for the war, he could have provided a much more detailed accounting of how it helped Trump’s America First slogan resonate with so many people.  He does not.  He also asserts that the 2008 financial collapse contributed to the Trump’s economic populism, but did not explain how.  How did conservative economic policies contribute to the financial meltdown?  Was it a failure of oversight?  Not cutting enough regulations?  Too much deregulation?  Without a full accounting, his political mea culpa is hollow and fails to offer guidance on how to avoid mistakes in the future.

Drawing a distinction between twentieth and twenty-first-century American conservatism is also disingenuous.  Frum is rightly horrified by the racially-charged tactics that Trump routinely employs, but without looking deeper into the history of the conservative movement, he does a disservice to his readers. For instance, he does not address National Review’s opposition to the desegregation efforts of the Civil Rights movement, Nixon’s Southern Strategy, or George H.W. Bush’s notorious Willie Horton ad, and how each of them has greatly damaged the Republican Party in the eyes of African Americans. Frum also could have delved into the fiscal recklessness of the GOP, which only seems to care about budget deficits when a Democrat is in the White House.  Ronald Reagan went beyond Lyndon Johnson’s promise that the country could have “guns and butter” by essentially saying that the country could have guns, butter, and low taxes.  This brand of free-lunch conservatism led to a near-tripling of the national debt from 1981 to 1989.

In the second half of the book, Frum offers a list of reforms to help the country restore its democratic structures and ensure their survival, including mandating that presidential candidates release their tax returns prior to elections; eliminating the filibuster to prevent legislative minorities from impeding Senate proceedings; granting statehood to the District of Columbia, an area more populous than Vermont and Wyoming; passing a new Voting Rights Act to ensure that all Americans have access to polling stations without lengthy wait times or cumbersome procedures; and creating non-partisan commissions to create electoral districts that are not simply designed to perpetuate the majority party’s hold on seats.  He also makes sensible policy recommendations on major issues like health care, immigration, and climate change.  This was the most disappointing part of the book, not because of the proposals themselves, but because of his failure to ground them in a conservative historical and philosophical framework.

In the introduction, Frum dedicates the book to “…those of you who share my background in conservative and Republican politics.  We have both a special duty—and a special perspective.  We owe more; and we also, I believe are positioned to do more.”  Yet he does little to make his recommended reforms palatable—let alone desirable—to conservatives outside the Never Trump camp.  Consider the environment.  Many of today’s self-proclaimed conservatives recoil from measures to protect the environment, rejecting such initiatives as attempts by “the Left” (which seems to include everyone on the political spectrum between Joseph Stalin and David Brooks) to seize control over more of the American economy and society.  In fact, environmentalism and conservatism share a great deal philosophically.  One of the cornerstones of conservative thought comes from Edmund Burke’s Reflections on the Revolution in France, first published in 1790.  In the book, Burke—an Irish Whig who served in the British House of Commons from 1766 to 1794—proposed a social contract in sharp contrast to Rousseau’s, which was predicated on the notion of the “general will” of the people.  For Burke, “Society is a contract between the generations:  a partnership between those who are living, those who have lived before us, and those who have yet to be born.”  Placed in this context, climate change is a vital issue that we need to address, lest we break the covenant and bequeath a world less hospitable to life than the one we inherited from our forebears. As Barry Goldwater starkly put it in The Conscience of a Majority (1970), “It is our job to prevent that lush orb known as Earth…from turning into a bleak and barren, dirty brown planet.”  Reminding Republicans of their party’s numerous contributions to environmental protection—such as Goldwater’s support for the Clean Air Act, Richard Nixon’s establishment of the Environmental Protection Agency, and Ronald Reagan’s signing of the Montreal Protocol, which placed limits on ozone-depleting chemicals—could help Frum convince them that supporting future environmental measures is not an abandonment of conservative principles.

Trumpocalypse will delight many liberals who revel in watching the internal divisions in the GOP.  It will also supply them with considerable ammunition that they can use in debates with their Trump-supporting friends and family members.  The book provides some sharp digs (describing the One America Network as “Fox-on-meth” was my favorite) and is clearly and concisely argued.  I have my doubts, however, that the book will do much to win over many of Frum’s fellow conservatives who make up the book’s intended audience.  Sadly, due to the carefully constructed information bubbles that Americans have created for themselves, it’s possible that very few self-proclaimed conservatives will even know the book was published.