Rachel Ida Buff is Professor of History, Director of the Cultures and Communities Program, and Coordinator of Comparative Ethnic Studies at the University of Wisconsin-Milwaukee. She is the author of Against the Deportation Terror: Organizing for Immigrant Rights in the Twentieth Century. 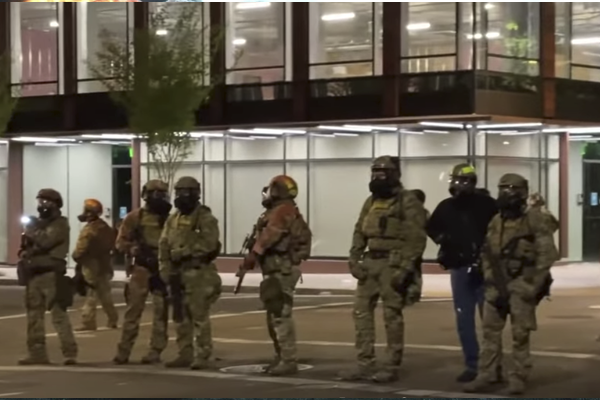 Testifying before Congress, Attorney General Bill Barr characterized Movement for Black Lives protests as a threatening “insurrection.” How have youth led movements, accompanied by organized columns of mothers, veterans, and teachers, become public enemy number one? The terrifying spectacle of federal agents apprehending civilians who are exercising their constitutionally protected rights of free speech and assembly is the logical outcome of a long history of U.S. counterinsurgency policies, abroad and at home.

The appearance on U.S. streets of personnel from the Department of Homeland Security – an agency created in the wake of the 9/11 attacks to “safeguard the American people” from terrorism –is tantamount to a declaration of counterinsurgency warfare on the Black Lives Matter movement and its numerous supporters, including those deemed “violent anarchists,” “socialists,” and/or “antifa.”  Charged with maintaining “safe borders,” the DHS has long extended its reach far from the geographic border, terrorizing the foreign born.  With the recent deployment, the DHS continues its assault on all civilians, particularly people of color and those suspected of subversive beliefs.

Operating in the name of law and order, counterinsurgency policies function by creating and then targeting particular enemies of the state. Such “enemies” are deemed to be dangerous because of their beliefs, their identities, and/or the “violent” practices invariably ascribed to them. Political demonstrations that result in the destruction of property are assailed as unlawful riots, thereby justifying the use of force against primarily peaceful protesters. Subsequently, counterinsurgency practices inaugurate their own murderous regimes of pacification.

Declarations of counterinsurgency warfare on a targeted “public enemy” reverberate with a long history in North America. In the 18th and 19th centuries, indigenous nations defended their lands against incursions by Euroamerican settlers backed by a federal government seeking control of resources in the trans-Mississippi west. Lakota historian Nick Estes describes counterinsurgency as:

“asymmetric warfare that includes collective punishment; the taking of children; the forcing of communities to choose between their lives or surrendering their kin or ceding their lands; the use of native scouts and auxiliaries that are in the service of colonial governments; the use of reserves as spaces of containment; the imprisonment, assassination, defamation, or removal of leadership; the targeting of socio-economic institutions as the basis for autonomy; and the need to “civilize” in order to pacify or “the winning of hearts and minds.”

As federal engagement in active wars with Indian nations tapered off during the late 19th century, U.S. counterinsurgency policies migrated abroad with the flag of empire:  to the Philippines, the Caribbean, Central and South America. Over the course of the twentieth century, the United States intervened forty-one times to create regime change in Latin America alone. Such interventions involved counterinsurgency operations: coups, civil wars, declarations of emergency powers and the resulting repression, displacement, and murder. As sociologist Stuart Schrader explains, counterinsurgency pioneered abroad return to the streets of U.S. cities in the form of technology and policing practices.

Counterinsurgency warfare destroys communities, forcing thousands of people from their homes.  But refugees of the murderous wars waged under the flag of counterinsurgency policy rarely find safe harbor in the United States.

In 2018 and 2019, caravans of refugees, migrants, and asylum seekers from the Americas, Africa, and Europe traversed thousands of miles on foot to approach the U.S.-Mexico border, only to be reviled as dangerous “criminal aliens.” Many of them fled the terror and corruption of regimes installed by U.S. counterinsurgency policy. Arriving at the border, caravan members confront a “zero tolerance” counterinsurgency policy resulting in the taking of children through unlawful and inhumane family separation policies and a “Migrant Protection Protocol” that violates international refugee policy by forcing asylum-seekers to remain in Mexico. During the global pandemic, people imprisoned in detention facilities or forced into precarious and temporary quarters are at an increased risk of infection and illness.

Portrayals of Black Lives Matter protesters as violent “thugs” assailing collective security and “law and order” resound with these characterizations of caravans of displaced persons, many from indigenous nations, at the border. In both cases, groups of people seeking justice are depicted as criminals bent on destroying the social order for individual gain, whether through looting or drug-smuggling.

Both the caravans and the Movement for Black Lives respond to the depredations of precisely the same “law and order” regimes that greet them with repression and derision.  Since the police killing of Michael Brown in Ferguson, Missouri in 2014, the Movement for Black Lives has organized against the violence of militarized policing in Black communities, demanding the defunding and abolition of policing.  Multinational caravans of people seeking safe harbor from the ravages of U.S.-backed dirty wars and austerity regimes in Latin America, the Caribbean, and Africa insist on their right to safe harbor against a regime of militarized borders.

Throughout its bloody history, counterinsurgency policy has undermined democratic regimes and created civil strife, endangering and displacing civilians in the name of “law and order.”  Now, on the streets of U.S. cities, federal agents join militarized police in waging war on Americans who are exercising their lawful rights of freedom of speech and assembly. There is no doubt that the results endanger us all.