Mary Henold is the John R. Turbyfill Professor of History at Roanoke College in Virginia. 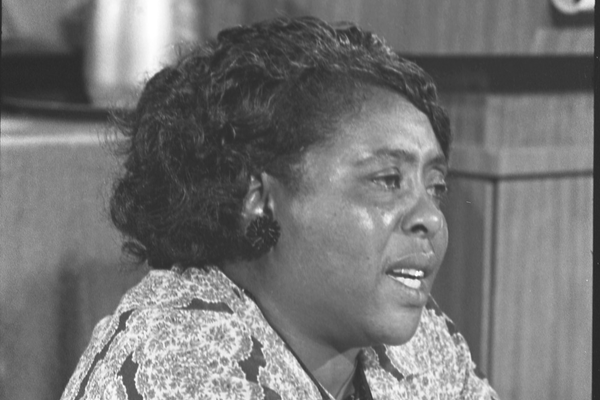 MFDP objected to the seating of an all-white Mississippi delegation chosen by an all-white Democratic electorate as part of the struggle to pass federal voting rights legislation.

August 26th is Women’s Equality Day, a commemoration of American women gaining the right to vote that has been celebrated since 1973. This year holds extra significance as it marks the 100th anniversary of women’s suffrage in the United States. Except it doesn’t. 1920 is a milestone for some American women, but certainly not for all.

As a historian of American women, I can tell you that suffrage is one of the only topics in women’s history generally taught in American schools. (Or at least, this movement is usually the only women’s history topic familiar to the college students that end up in my classroom). That story of suffrage is anchored by two dates: the first women’s rights convention held at Seneca Falls, New York in 1848, and the day women were “granted” the right to vote in 1920. Unless you live in western New York state, the cradle of the American women’s movement of the 19th century, you are unlikely to come across statues or monuments to the women who struggled so valiantly, and for so very very long to cast a ballot. We don’t get many monuments in women’s history, so we cling to dates instead.

The women’s history world has gone all out this year to celebrate this milestone, and I encourage you to make a virtual if not an in-person visit to the phenomenal exhibits at the National Archives and the Library of Congress that preserve and interpret the lives, work, and sheer persistence of American suffragists. But the historians and archivists who spent years building these exhibits for 2020 will be the first to tell you that the intense focus on the year 1920 is a form of erasure. For too long this date has been taught as a triumphant conclusion of the story of a movement, when for millions of women of color, it was only a painful moment of exclusion that served to prolong white supremacy.

Despite the movement’s strong ties to the abolition movement in the years before the civil war, and the many prominent Black suffragists active throughout the entire movement, racism among white suffragists was common and wielded strategically. Many white suffragists deplored, and in fact fought against, the 15th amendment which afforded African-American men voting rights in 1870, arguing that white women obviously deserved the vote first. In the late 19th century, southern white suffragists began asserting that empowering white women with the ballot would literally ensure white supremacy. Regrettably, most of their northern counterparts allowed this rhetoric because they needed southern states to pass what would become the 19thAmendment.

The story of the final push for suffrage in the summer of 1920 illustrates how deeply racism was embedded in the struggle for the vote, and also how racism was erased from the narrative in subsequent years. All available activists, pro and con, descended on Tennessee that summer in an attempt to sway (and in many cases, bribe) the state’s legislators meeting in special session. The “Red Rose Brigade,” as the opposition termed itself, used openly racist arguments in its lobbying. The Brigade’s leader, a local professor named Josephine Pearson, invited allies to join them from across the South, saying “Tennessee considers no influence as outside that is Southern or invited to this state by united southern sentiment for the preservation of our state constitution and white civilization.” They circulated pamphlets in which they quoted W. E. B. duBois as saying that women’s suffrage would promote racial equality. They photographed themselves at their headquarters with an enormous Confederate flag as the backdrop.

We might hope that suffrage leaders countered this message, but they did not. While the national white leadership privately praised the work of hundreds of Black Tennessee suffragists working for the cause, in public leaders argued that white supremacy need not factor into the choice facing state legislators: African-American women could be disfranchised as effectively as African-American men had been, once the amendment was passed.

Until I began researching the summer campaign for a talk I gave this year, I was unaware of this history myself. Instead, the story I learned about Tennessee in August 1920 was of unexpected, even miraculous, triumph, and the overwhelming joy that resulted. Usually, when I lecture on this topic, I relish telling the story of Harry Burn, a young state representative whom suffrage leaders had placed in the “leans no” column. On the day of the vote, national leader Carrie Chapman Catt acknowledged that victory was unlikely. “There is one more thing we can do – only one,” she said, “we can pray.” Convinced the measure was going down for defeat, suffragists were shocked when Burn became the deciding vote in favor of suffrage. What swayed him? A letter from his mother telling him to “be a good boy” and vote for the amendment. And then euphoria.

But what of the Black suffragists in Tennessee, and their counterparts throughout the country? Surely their joy that August one hundred years ago was tempered with the knowledge of what was likely to follow: triumphant white suffragists moving on to new causes, and women of color left waiting and fighting for equality that never arrived.

The work of the women’s suffrage movement did not end in 1920. Women of color throughout the south, now systematically denied the vote solely due to their race, carried on. We see the work of suffragists in the protests and marches of the civil rights movement. We celebrate the work of women suffragists in the 1960s who put their bodies on the line to register to vote (and register others), knowing they could be threatened, beaten, fired, or turned out of their homes. Women of color and their allies truly won the right to vote for all American women not in 1920, but in 1965, with the passage of the Voting Rights Act.

If we don’t have monuments, we can at least get our dates right, so that all who contributed to this movement for justice are recognized. My guess is that most did not hope for a great bronze statue anyway. Remember them proudly every time you stand in line to place your ballot, or listen for their voices each time you are temped not to bother. Let their memory prompt you to ensure equal voting rights whenever and wherever they are threatened. That is legacy enough.

The author would like to recognize the work of Anastatia Sims, whose journal article directed her to many sources relevant to the discussion of the Tennessee suffrage campaign presented here: