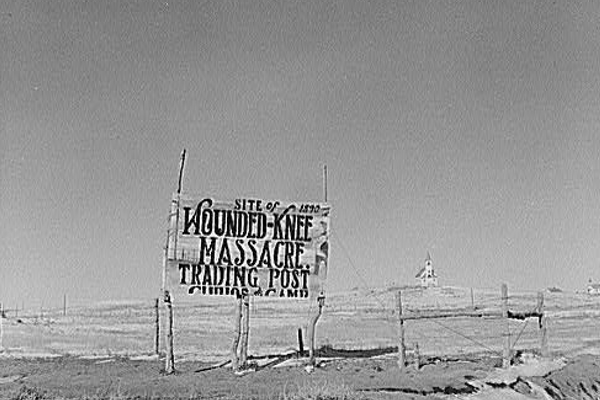 As a nation we have not owned up to the grievous, centuries-long harm we have done to Native and African Americans. To what extent are we historians responsible?

In late August 2020 a policeman in Kenosha, Wis. fired seven shots in to the back of a Black man named Jacob Blake. For three months--from late May, when another Black man, George Floyd, was killed by a policeman who knelt on his neck--we have seen almost continued protests over how police have treated Black Americans. Shortly after the Blake shooting, various professional athletes, following the lead of the NBA’s Milwaukee Bucks, canceled some scheduled games or practices.

“This country does not love us back.” Why? Why does systematic racism continue to trouble our country, a century and a half after the end of slavery? One answer is that we have not sufficiently acknowledged, not sufficiently atoned for, the sin of slavery.

In a previous article I referred to two of the USA’s “most heinous crimes—genocide against Native Americans and slavery.” Now (in my title) I refer to them as “our holocausts.”

I do not use the word “holocaust” carelessly. Historians should guard against throwing around such words loosely. But holocaust should not be limited to “the killing of millions of Jews by the German Nazi government in the period 1941–5.” This is only an Oxford dictionary’s second definition. The first is “a situation in which many things are destroyed and many people killed, especially because of a war or a fire.” Long before 1941 the term was used in this way, and even more broadly--see, for example, F. Scott Fitzgerald’s The Great Gatsby.

I use “holocausts” here because it seems appropriate for situations “in which many things are destroyed and many people killed.” And it captures best the enormity of what European colonizers and then white Americans have done to Native and African Americans. Moreover, some scholars, such as Russell Thornton in American Indian Holocaust and Survival: A Population History since 1492 (1990) and David Stannard in American Holocaust: Columbus and the Conquest of the New World (1993), have previously applied the word in a similar way.

To get some idea of the numbers involved, let’s start with the following quote from Jill Lepore’s These Truths: A History of the United States. “Between 1500 and 1800, roughly two and a half million Europeans moved to the Americas [note: not just the USA]; they carried twelve million Africans there by force; and as many as fifty million Native Americans died, chiefly of disease,” most of them because they had no immunity to the diseases passed on to them by those of European ancestry. In discussing this most common means of death, however, historian Roxanne Dunbar-Ortiz emphasizes that colonizers didn’t regard all those deaths as just unfortunate accidents, but from the very beginning intended to eliminate, one way or another, Indian civilization. Stannard stressed the continuing interaction of the diseases with a “deliberate racist purge.”

Although estimates of Native American population in 1492 in what is today the conterminous United States vary widely, Thornton estimated it at about 5 + million, and added that it “declined to but 600,000 by 1800,” and “to about 250,000 by the last decade of the nineteenth century…. This was a population some 4 to 5 percent of its former size.” No wonder he referred to the “American Indian Holocaust.”

Stannard claimed that “the destruction of the Indians of the Americas was, far and away, the most massive act of genocide in the history of the world.” And despite, some twentieth century improvements and an increased Indian population, he still faulted (in 1993) the U. S. government for “its willful refusal to deal adequately with the life-destroying poverty, ill health, malnutrition, inadequate housing, and despair that is imposed upon most American Indians who survive today.”

With any such woes there is always the question of responsibility. To what extent is it societal or due to personal failings? Although the exact mix is difficult to determine, there is no doubt that we Whites and the governments that have represented our interests bear a heavy responsibility for the historic mistreatment of Native and African Americans.

Of the horrendous conditions facing slaves captured in Africa and sent to the United States much has been written. By 1790, “there were almost 700 thousand slaves in the US . . . which equated to approximately 18 percent of the total population.” By 1860, “there were four million slaves in the South, compared with less than 0.5 million free African Americans in all of the US.” The slaves, who made up about half of the South’s population, worked mainly on large cotton plantations. (For a fictional treatment of slavery, see Harriet Beecher Stowe’s Uncle Tom’s Cabin.)

After the Civil War years and the end of slavery, the Reconstruction era (1865–1877) followed, but it got off to a slow start due to President Lincoln’s assassination and his successor’s presidency. For Andrew Johnson was a former Tennessee governor and, in the words of historian Eric Foner, “incorrigibly racist.” As Lepore writes, “By the winter of 1865–66, Southern legislatures consisting of former secessionists had begun passing ‘black codes,’ new, racially based laws that effectively continued slavery by way of indentures, sharecropping, and other forms of service.” In 1866 the Ku Klux Klan began their decades of White terror against Black people.

Congress, however, opposed Johnson and Southern racist policies. In April 1866, it overcame a Johnson veto to pass the Civil Rights Act. During the two-term presidency of Ulysses Grant (1869-1877), Reconstruction policies, aided by federal troops stationed in the South, prevailed. According to Douglas Brinkley, during Reconstruction 22 Black legislators served in Congress, and “Blacks were elected to the legislatures of every one of the Confederate states.”

Yet, as Lepore writes, “Political equality had been possible, in the South, only at the barrel of a gun.” What followed was what Henry Louis Gates Jr. calls “the Redemption era” of 1877 to 1915, when Black enfranchisement ended; the Klan and other Whites terrorized Black people; and Jim Crow laws segregated them from Whites in various places from playgrounds to public transport.

Thousands of black men were also lynched. As late as 1930, in Marion, Indiana, two young innocent black men were lynched surrounded by white onlookers. In Cincinnati, where I grew up, the swimming pool at Coney Island did not permit Black swimmers until 1961. In the early 1960s, I lived in northern Virginia, where interracial marriage was still prohibited and where I remember picketing a northern Virginia movie theater that still discriminated against Black patrons.

More recently, Gates recalls other signs of racism: Dylann Roof murdering “the Reverend Clementa Pinckney and the eight other innocents in Mother Emanuel AME Church in Charleston, South Carolina, on June 17, 2015”; the white supremacy rally in Charlottesville, Virginia, on August 12, 2017, “when an avowed white supremacist plowed his car into a crowd of counter-protesters”; and a White racist, in October 2018, unable to get into the “predominantly black First Baptist Church in Jeffersontown, Kentucky,” settling instead for fatally shooting “two African American shoppers” at a local Kroger.

Between 2018 and today, besides the George Floyd and Jacob Blake episodes, numerous other cases reflecting our ongoing racism could be mentioned, many of them abetted by President Trump, who commented about the white supremacy rally in Charlottesville and opponents of it, “there's blame on both sides,” and there “were very fine people, on both sides.”

The disadvantaged poverty rate and educational attainment of Black Americans have already been mentioned. In addition, the life expectancy of Black males is lower and their incarceration rate much higher than for White men. In 2020, as the government CDC reports, Black and other “racial and ethnic minority groups are being disproportionately affected by COVID-19. Inequities in the social determinants of health, such as poverty and healthcare access, affecting these groups are interrelated and influence a wide range of health and quality-of-life outcomes and risks.”

Thus, from the days of Columbus to the present, Native and African Americans have suffered grievously. Despite significant gains, including electing our first Black president, the Trump presidency has setback attempts to alleviate the effects of past injustices--see, e.g., here and here. Trump has reinforced White resistance to any efforts toward atoning for past and present racial injustices.

In the early postwar years after the downfall of the German Nazis, Germans also resisted any talk of guilt. In his much discussed 2014 essay, “The Case for [U. S.] Reparations,” Ta-Nehisi Coates mentioned this, but then indicated how the Germans came around to owning up to their Holocaust guilt. More recently (in 2019) Susan Neiman, in her Learning from the Germans: Race and the Memory of Evil, noted that “after the 1963 Birmingham church bombing, James Baldwin said that white Americans share collective guilt for the persecution of black Americans as Germans did for their silence during the Nazi persecution of Jews.” Later Neiman added, “after white nationalist demonstrators [in 2017] screamed ‘Blood and Soil’ in Charlottesville, does the comparison require further argument?”

Having been raised in the U. S. South, and then spent many years in Germany, Neiman details how both areas have (or have not) grappled with responsibility for their racial crimes. While presenting numerous examples of how Germans have attempted to atone--see a recent HNN article for a few examples--she writes that “America's failure to face its past is evident not only in the vicious outbursts of white supremacy that Donald Trump encouraged, but in subtler ways as well.”

Exactly what form this atonement should take is a complicated question, but first we have to own up to our responsibilities. And this is where we historians come in. Some, like Thornton, Stannard, and Gates, have stressed past racial injustices. But many others have not sufficiently done so. More of us have to write and teach U. S. history in such a way that readers and students recognize how grave U. S. injustices to Native and African Americans have been.

In his Lies My Teacher Told Me: Everything Your American History Textbook Got Wrong, James Loewen writes “our teachers and our textbooks still leave out most of what we need to know about the American past.” This is especially true in pre-college classrooms and regarding the depth of our past racial injustices. Loewen writes, “Almost half the states have textbook adoption boards. Some of these boards function explicitly as censors, making sure that books . . . avoid topics and treatments that might offend some parents.”

Under such circumstances, teaching history as we should, especially in pre-college courses, can be very difficult. But as I have written previously, avoiding parental disapproval or teaching patriotism should not be our goal. “Historians’ main allegiance should be to truth-telling.” And the truth includes owning up to the grievous harm we have done to Native and African Americans. Only then can we atone for our past misdeeds and create a truly “composite nation,” where we are “made better, and stronger,” not in spite of our “many elements, but because of them.”