Guy Lancaster is the author of Racial Cleansing in Arkansas, 1883–1924: Politics, Land, Labor, and Criminality, editor of Bullets and Fire: Lynching and Authority in Arkansas, 1840–1950, and co-author of the revised edition of Blood in Their Eyes: The Elaine Massacre of 1919. This open letter was originally published on the website of the Arkansas Times on September 21, 2020. 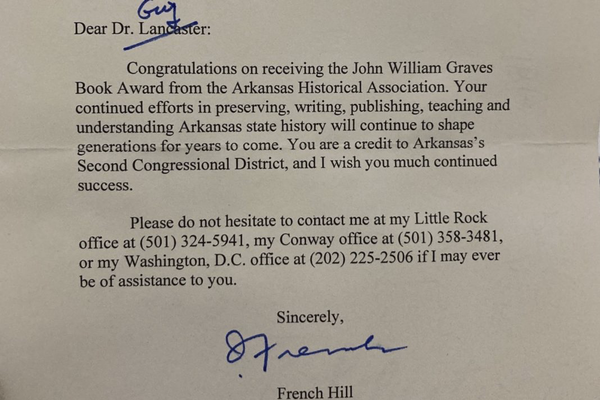 I have been contemplating for some time whether or not I should to respond to your letter of July 15, 2020, in which you praised me for winning the John William Graves Book Award from the Arkansas Historical Association and expressed a certain interest in reading the revised edition of Blood in Their Eyes: The Elaine Massacre of 1919, of which I am a co-author. At the time I received it, this letter seemed to me some kind of sick joke, and as the months have passed, my sense of the inappropriateness of your letter has only grown. I hope that you will allow me to explain my meaning.

In mid-July, you will remember, the United States was still experiencing ongoing protests against police brutality—especially as directed toward African Americans—that erupted in the wake of the murder of George Floyd, who was choked to death in public so efficiently he may as well have been hanging from a noose. These protests were met with new waves of violence as police beat, shot, and tear-gassed citizens across the nation, and soon unidentifiable federal troops were systematically kidnapping Americans in places like Portland, Oregon, based upon rumors of “Antifa” affiliation. Donald Trump ordered an attack upon unarmed civilians at Lafayette Park in Washington DC, before curfew had fallen, so that he might pose with a bible in hand, and just a few days later, Senator Tom Cotton published a New York Times editorial demanding military intervention to “restore law and order.” In the midst of all of this, armed white supremacist radicals began appearing at these protests either to carry out murders that might be pinned on Black Lives Matter (as they did in California) or to attack the protestors themselves.

During all of this, you never wavered in your faith in—and support of—Donald Trump. And so you can, I hope, understand why I was confused that you should so praise me for having produced two books related to the Elaine Massacre. The massacre, you might recall, was precipitated by the efforts of local African American sharecroppers in Phillips County to form a union and file suit against plantation owners for just recompense for their labor, as sharecroppers were regularly subject to peonage, or debt slavery, and abuse and exploitation of a thousand other varieties. Local authorities learned about the union, and two white law enforcement personnel, along with a black trusty, drove to the Hoop Spur church on the night of September 30, 1919, just as union members were meeting. The Hoop Spur church was shot up, and one of the white lawmen killed in an exchange of gunfire. In the hours that followed, rumors of a “negro insurrection” began to spread, leading the Phillips County sheriff to deputize American Legion members, who swiftly joined the mobs flooding into the area, killing everything in their path. Leaders in Helena called upon Governor Charles H. Brough to send federal troops to “restore law and order,” and he did, but these soldiers likely participated in the violence, killing African Americans with impunity. In the chaos, mobs and deputies and the military would kidnap black people and subject them to torture to make them confess that their ultimate plan was the murder of every white person in Phillips County. The violence left an unknown number of African Americans dead—a body count that may have reached into the hundreds.

Moreover, just last week, your president announced, at what he called the “very first White House Conference on American History,” the establishment, by executive order, of the “1776 Commission,” which he pitched as an attempt to rescue history from modern professors, saying, “Our mission is to defend the legacy of America’s founding, the virtue of America’s heroes, and the nobility of the American character. We must clear away the twisted web of lies in our schools and classrooms, and teach our children the magnificent truth about our country. We want our sons and daughters to know that they are the citizens of the most exceptional nation in the history of the world.” Among the examples of “toxic propaganda” Donald Trump excoriated were the field of critical race theory and the 1619 Project of the New York Times.

In the light of Donald Trump’s executive order, I am even more perplexed by the kind letter you sent me, in which you declared me “a credit to Arkansas’s Second Congressional District” and praised my efforts in “preserving, writing, publishing, teaching and understanding Arkansas state history.” After all, aside from the books of mine you praise in your letter, I have also written a monograph on racial cleansing in Arkansas and edited a book on lynching in the state. In addition, I have a few books forthcoming that continue this analysis of racial violence in Arkansas. I believe that the best way to advance as a civilization is to understand the complex history that has resulted in the numerous social divisions present in our society, for by properly understanding the cause, we might effect a cure. However, the president whom you serve insists, rather, that books such as mine are “propaganda tracts… that try to make students ashamed of their own history.” What do you believe? Do you think me a credit to the district due to my efforts in the field of history, or do you think me a left-wing anarchist attempting to destroy our nation? Please let me know.

You may be familiar with the biblical passage of Matthew 6:24, in which Jesus says, “No one can serve two masters; for either he will hate the one and love the other, or he will be devoted to one and despise the other.” In the past, you have shown some devotion to the field of history. You even received the Arkansas Historical Association’s Tom Dillard Advocacy Award in 2018. However, you have also persisted in being a good and faithful servant to Donald Trump in everything he does. Does this mean that, with the establishment of Donald Trump’s 1776 Commission, you have renounced your love of Arkansas history and your appreciation of the historians who have been writing and teaching it? Please let us know.

I truly do despair at what Donald Trump’s demands for patriotism above everything mean for the field of American history. After all, we know how white patriots at the time of the Elaine Massacre were interpreting events. Just a few short days after the massacre started, one state newspaper described its origins thusly: “Vicious Blacks Were Planning Great Uprising.” Is this what we must teach in the future, Congressman Hill? Will historians like myself be condemned or canceled for departing from the party line that what happened at Elaine was anything but a “negro insurrection”?

I look forward to hearing from you.