The Audacious Escape of George Blake

Journalist and author Steve Vogel reported for the Washington Post for more than 20 years, writing frequently about defense issues. His latest book, BETRAYAL IN BERLIN: The True Story of the Cold War’s Most Audacious Espionage Operation, was released in paperback  Sept. 15 by Custom House. 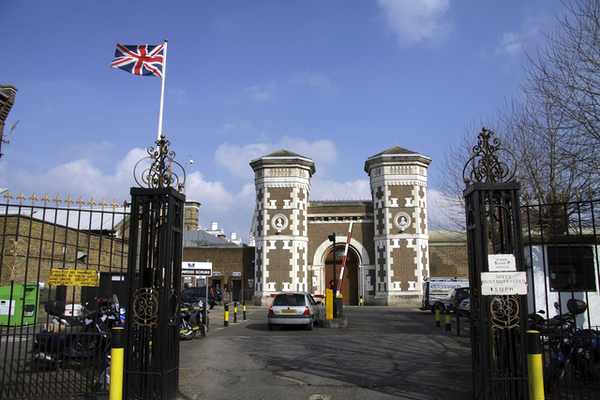 On a rainy evening in October 1966, the British spy George Blake eased his way through a small gap between the iron bars of a window at Wormwood Scrubs, the dingy Victorian-era prison in West London where he was serving the longest sentence ever handed out by a British court.

Shielded from the guards’ view by blankets draped over a stairwell railing, Blake slipped easily out the opening and felt with his feet for the roof of a passageway. The tiles were slippery from the steady rain, but Blake nimbly made his way to the edge of the roof, grabbed the gutter and dropped to the ground. He pressed himself against the building, hiding in a small recess while he waited for an accomplice to throw a rope ladder over the nearby prison wall.

After an interminable delay, Blake could see the ladder sailing over the top in the dim light of the prison yard’s arc lamps. The rungs writhed momentarily and then the ladder hung motionless on the wall. “It looked incredibly thin and fragile but the moment I saw it I knew nothing now would stop me,” he later said. In a flash he was over the wall.

The escape of George Blake, who died Dec. 26 at the age of 98, set off the largest manhunt in British history. There were howls of outrage in London and Washington, where politicians and intelligence officials were incredulous that one of the Cold War’s most dangerous and notorious spies was back on the run. During a decade of spying for the KGB, Blake had done “most serious” damage to the West, CIA director Allen Dulles told President John F. Kennedy upon the spy’s arrest in April 1961.

The assumption from the corridors of power to barrooms on both sides of the Atlantic was that the KGB must have engineered his escape. But the truth was even more remarkable – the escape had been entirely an amateur affair, more Keystone Cops than Mission Impossible.

Escape came naturally to Blake, the son of  a Turkish Sephardic Jew who fought for the British army in World War I, became a English citizen, and married a Dutch Protestant woman. As a schoolboy courier for the Dutch resistance in Nazi-occupied Holland during World War II and fearing arrest because of his Jewish heritage, Blake made a daring 1,000-mile escape across Europe, jumping off a moving train in Belgium to evade German soldiers and trekking across the snowy Pyrenees Mountains on a mule trail into Spain. Making his way to England, where his mother and sisters had already been evacuated. Blake joined the Royal Navy. His underground experience and command of languages—he already spoke four fluently—led to his recruitment in 1944 to join the British Secret Intelligence Service.

Blake proved adept at espionage, using his assignment in postwar Germany to develop agent networks to spy on the Soviets. In 1949, he was sent to Korea as SIS station chief in Seoul. The following year, the North Korean army invaded the south in 1950, beginning the Korean War. Blake was soon taken prisoner along with the rest of the British legation. When the prisoners were taken north, Blake unsuccessfully attempted to escape twice and was threatened with execution if he tried again. Along with captured American GIs, the prisoners were subjected to hellish treatment during a forced march further north through sub-freezing temperatures. Hundreds died, but Blake survived and endured nearly three years of captivity.

When he was released in 1953, Blake returned to a hero’s welcome in England and was soon assigned to an extremely sensitive job with SIS in London. But unbeknownst to his superiors, Blake had turned during his captivity and agreed to spy for the KGB—treachery he would attribute to embracing Communism. For the next decade, Blake did enormous damage to Western intelligence, including betraying the Berlin Tunnel, an elaborate CIA and SIS espionage operation in the mid-1950s that successfully tapped Soviet Army communication lines. Assigned to Berlin, Blake gave the Soviets information about numerous British intelligence operations and blew the cover of hundreds of agents.

Blake’s superiors at SIS considered him above reproach, but he finally came under suspicion in 1961 based on tips from a defecting Polish intelligence officer. Lured back to London from a posting in Lebanon, Blake confessed, pleaded guilty, and was given a 42-year sentence.

After his arrival at Wormwood Scrubs in May 1961, Blake presented himself to authorities as a model prisoner, one who had resigned himself to making the best of a long life behind bars. He was taken off the prison’s list of escape threats. He made friends with fellow prisoners by always lending a sympathetic ear to their travails, helping them draft letters or petitions seeking parole, and offering counsel. Even some of the guards came to him for advice. He held German and French lessons in his cell for other prisoners. He hosted Sunday morning coffees to listen to BBC discussions of books and plays.

Throughout his captivity, Blake kept an eye out for prisoners who might be willing to help him escape. Early on, he befriended anti-nuclear activists Michael Randle and Pat Pottle and stayed in touch after their release from prison. By 1965, Blake’s hopes that the KGB would help him escape or would trade him for a western spy had faded, and he decided that if he was to get out of Scrubs, he would have to make it happen himself. But Blake needed someone still on the inside, yet due to be released soon, who could serve as the go-between and help pull off the escape.

Blake had a candidate in mind: Sean Aloyisious Bourke, an Irishman with an anti-authoritarian bent and a literary streak who was serving an eight-year sentence at Scrubs for attempting to kill a police officer. Bourke was keen to help, and on walks around the prison, he and Blake began plotting. After his parole, Bourke managed to get a walkie-talkie smuggled into Blake in May 1966, allowing the two to regularly communicate. Randle and Pottle agreed to help, raising funds to buy a getaway car and rent a London flat where Blake could be hidden. The plan they settled on was relatively simple: The Irishman would toss a rope ladder over the prison wall at a pre-set time and place coordinated via the two-way radio.

The plotters set the escape for October 22, 1966, a Saturday evening, when many of the prisoners and guards would be out of the cell block watching a weekly movie. The timing was critical, but Bourke got caught in traffic and was late getting to the prison, and then further delayed by a couple necking in a car parked at the rendezvous spot beneath the wall on the prison’s east boundary. Waiting on the other side, with no word from Bourke, Blake was beside himself and had concluded the escape was off when the ladder suddenly appeared.

Reaching the top of the wall in the drenching rain, Blake peered down at Bourke and began lowering himself before letting go. He fell awkwardly, breaking his wrist and knocking himself unconscious when his head slammed into the gravel path. Bourke tossed Blake into the back seat of his car and they raced off into the dark night.

Blake came to his senses as they raced from the scene, but they had driven barely a block when Bourke slammed into the bumper of a car in front that had stopped to allow pedestrians to cross the road. Onlookers peered curiously into the car. Bourke managed to get around the mess and floored the accelerator, reaching the hideaway apartment within a few minutes.

Alarms were raised at Wormwood Scrubs when Blake was discovered missing. Police rushed to airports, ports and East European embassies. After receiving a tip that Blake was about to fly out of the country in a harp case being transported by a member of the Czechoslovakian State Orchestra, police searched every instrument and musician but found nothing. Blake’s photo flashed on television screens across the country. Watching the news from their hideaway flat, Blake and Bourke toasted themselves with whiskey and brandy. Bourke quoted Shakespeare: “Mischief, thou art afoot; take thou what course thou wilt.”

For weeks, there were sightings around the world. After getting a tip, police in Australia surrounded a jet that landed in Sydney and vetted passengers for wigs, false beards or dyed hair, but found no sign of Blake. All the while Blake was lying low in London, but his accomplices were forced to move him several times. One hideaway at the posh home of a leftwing Anglican priest had to be hastily abandoned when the priest’s anxious wife told her analyst that she was harboring George Blake. Meanwhile the plotters debated various hare-brained schemes to get the spy out of England. They tried to persuade Blake to dye his skin brown so he could leave the country in disguise. They also considered tossing Blake over the wall of the Soviet embassy in London. Blake nixed both plans.

The group finally settled on a plan to buy a camper van and try to smuggle Blake out of England to Berlin in a secret compartment they would build in the back.  After weeks of work, Michael Randle and his wife Anne took off for the continent on the night of Dec. 17, 1966, with their two young children, and Blake hidden in the compartment, hoping to pass as a family on Christmas holiday. They had a reservation on the midnight ferry to the Belgian port of Ostende, but got a late start and were racing the catch the ship when they heard pounding from below. Stopping and opening the rear compartment, they found Blake retching from the odor of a rubber hot water bottle in the confined space.

They ditched the hot water bottle and made it to the terminal with ten minutes to spare, and the van was waved on board without inspection. The Randles drove non-stop through Belgium and into West Germany in a torrential downpour, forced to clear the windshield by hand when the wipers gave out. At the East German border, a guard looked in the back but upon spotting the children, waved the van through. Close to midnight Dec. 18, the Randles followed Blake’s instructions and dropped him off near a stand of pine trees about a mile from an East German checkpoint leading into Berlin. A skeptical East German Army officer telephoned KGB headquarters in Berlin to report a man claiming to be Englishman had shown up at the checkpoint on foot.

Sergei Kondrashev, a senior KGB officer who knew Blake well, rushed to the scene, and was astonished to find the spy, unshaven and bedraggled, but easily recognizable. A week later, Blake was whisked on a KGB jet to Moscow.

From the Soviet capital, Blake wrote a note to his mother in England, which the KGB posted from Cairo to throw off Western intelligence. “I am a free man again,” he said.