How Abraham Lincoln Can Inspire Peace for Yemen

William Lambers is an author who partnered with the UN World Food Program on the book Ending World Hunger. His writings have been published by the Washington Post, History News Network, USA Today, Baltimore Sun and many other news outlets.Lambers is also the author of the Hunger Heroes section of the WFP online game FreeRice. 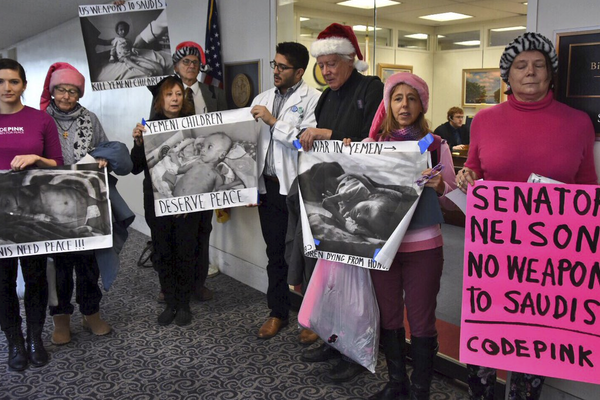 As President Biden begins his diplomatic push to end the civil war in Yemen, each of us can get involved. We can even get some inspiration from Abraham Lincoln as we celebrate his birthday and Presidents' Day this month.

That is exactly what happened in February, 1948 when Americans started the Abraham Lincoln Friendship Train to send food to war-torn Europe. The train got its start in the small farming communities of Nebraska, Iowa and other Midwest states. People gathered food supplies to load onto the train. Church World Service, Catholic Relief Services and charities organized the Train and its trek across the country picking up donations.

The Lincoln Train was part of a series of Friendship Trains in response to the hunger crisis in Europe. Food for the hungry was essential to win the peace after World War II.

Now today Yemen is desperate for food. The fighting between the Saudi Arabia led coalition against the Houthi rebels has led to severe food shortages for millions.  As President Biden says the Yemeni people are suffering "unendurable devastation.  This war has to end."

Biden has already taken step one by cutting off military aid and arms sales to the Saudi coalition in Yemen.  The Trump administration had continued supporting the Saudis despite the fact that it was prolonging and worsening the humanitarian crisis. Save the Children says "Thousands of children have been killed or injured through targeting of civilians by all parties to the conflict, and American-made weapons have contributed to the violence."

Children are also dying from starvation in Yemen as famine continues to stalk the poorest country in the Middle East. The UN says that  2.3 million children under the age of five in Yemen will suffer from acute malnutrition in 2021,

“The increasing number of children going hungry in Yemen should shock us all into action,” said UNICEF Executive Director Henrietta Fore. “More children will die with every day that passes without action. Humanitarian organizations need urgent predictable resources and unhindered access to communities on the ground to be able to save lives.”

So as President Biden pushes forward with his plan to get a ceasefire in Yemen, we can help by sending food to the hungry. The World Food Program (WFP) and other relief agencies operating in Yemen need more donations. WFP has already reduced rations because of low funding.

12 year old Amina in Yemen recently wrote a letter to the World Food Program's Annabel Symington. "She pleaded "People die of hunger because they do not have enough food for themselves and their children.....Dear people of the world, please don’t forget Yemen. Remember my letter. I hope in the future we can be together in peace."

You can donate to WFP, Save the Children, CARE, Catholic Relief Services, Action Against Hunger, UNICEF, IRC and other charities providing aid in Yemen. Infant feeding and school meal programs must reach all children.  Rhode Island based Edesia produces Plumpy'nut which can save Yemen’s malnourished children. You can even donate to WFP easily through the apps FreeRice and Charity Miles.

You can write letters to Congress urging them to fund hunger relief for Yemen. The Congress, in the upcoming Coronavirus relief bill, should include funding for WFP so they can feed the hungry in Yemen and other countries in need.

President Biden and his new special envoy to Yemen will work to end the civil war. The actions we take can help the peace process and save millions of Yemenis from starvation.

As Abraham Lincoln said “With malice toward none and charity toward all."  We can each continue Lincoln’s quest to “achieve and cherish a just and lasting peace among ourselves and with all nations.”