History Found Dixie Kiefer, one of the Greatest Heroes of World War II in the Pacific

by Don Keith with David Rocco

Don Keith is the author of more than 35 books, including many non-fiction works and biographies on World War II history. He wrote The Indestructible Man: The Incredible True Story of the Legendary Sailor the Japanese Couldn’t Kill with co-author David Rocco. He is also co-author of The Hunter Killer Series of military thrillers with CDR (ret.) George Wallace. One book from the series was the basis for the major motion picture, Hunter Killer, starring Gerard Butler and Gary Oldman. 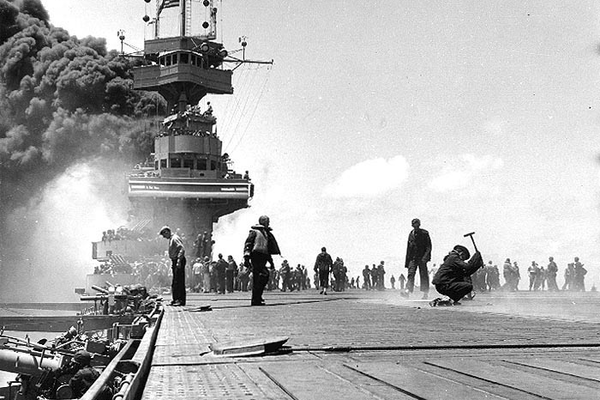 USS Yorktown, struck by Japanese bombs in the Battle of Midway, June 4, 1942.

A "sailor's skipper," Executive Officer Dixie Kiefer led efforts to repair the damaged ship and, though injured himself, pushed a raft of injured sailors to rescue.

Like Forrest Gump or Woody Allen’s Zelig, some people seem to have a knack for being present whenever and wherever history is made. But one such person is not a fictional character at all. Dixie Kiefer was about as real as they come. Like many naval leaders, he was born far from the sea, in Idaho. At Annapolis, he was better known for his difficulty in maintaining his weight than for his academics. But Kiefer’s determination, leadership skills, and ability to foresee the direction of future naval warfare would eventually make him one of the greatest heroes of World War II. But not one of the best known.

He was a visionary when he—unlike many of the leaders of the world’s naval powers—saw that the battleship would soon no longer rule the seas. Instead, it would be an airfield that could be floated to wherever it was needed, the aircraft carrier. Kiefer became a pioneer in naval aviation, even before the carrier. He was the first man to fly an airplane off a warship at night. That was at a time when aircraft were catapulted off destroyers or cruisers. But he and others helped develop carriers, from construction to implementation to tactics. And that work paid dividends in World War II.

Kiefer was the executive officer—the second in command—on the first USS Yorktown (CV-5) in the historic Battle of the Coral Sea. Historic primarily because, fought by carrier-launched aircraft, it was the first sea battle in which the competing vessels never saw each other. Historic, too, because though neither the Japanese nor the Allies could claim victory, the outcome would soon have an effect in another upcoming showdown. The United States lost one carrier and Yorktown was badly damaged. The Imperial Japanese Navy did not lose a ship. However, two IJN carriers were damaged badly enough to require they go back to the Home Islands for repair. They would be unavailable for another critical battle about a month later, this one near Midway Atoll.

The Battle of Midway, arguably the turning point of the sea war in the Pacific, would be another moment in history in which Dixie Kiefer would play a key role. His carrier, the Yorktown, limped back from the Coral Sea to Pearl Harbor for repairs that everyone believed would require up to two months. Admiral Chester Nimitz would have none of that. Intercepted Japanese messages indicated a major IJN task force was headed to Midway Atoll to take that island and entice the remaining American aircraft carriers—the IJN believed Yorktown was sunk at the Coral Sea—into a confrontation the US could not win. Nimitz ordered Yorktown to be ready to steam toward Midway in less than a week with sister flat-tops Enterprise and Hornet. Dixie Kiefer played a key role in making sure his ship was ready.

As most know, the US carriers, their torpedo- and dive-bombers and brave crews defeated the Japanese at Midway. Planes off Yorktown played a big role. Japan would never fully recover. But during the battle, two air-delivered Japanese torpedoes struck Yorktown, inflicting heavy damage. She began listing badly, apparently sinking. The order came to abandon ship. Kiefer was one of the last off.

But the next morning, the carrier was still afloat. The decision came to tow Yorktown back to Hawaii. Kiefer led the repair party back aboard to prepare the ship. Then, an enemy submarine managed to hit the carrier with two torpedoes. As she quickly sank, Kiefer helped surviving crew off the ship. In the process, he fell into the water, striking the ship’s hull, badly breaking his ankle and leg. Even so, he swam through the water pushing a raft full of badly injured sailors to their rescue. That heroic effort won Kiefer the Navy Cross.

Once recovered, Kiefer became the CO of a new carrier, Ticonderoga (CV-14). After taking the ship to war, and even steering her through a typhoon that claimed more ships and lives than any sea battle of the war, Kiefer ultimately faced his toughest test. The desperate Japanese had begun sending pilots on suicide missions. In January 1945, two kamikaze planes struck Ticonderoga. The first hit the deck where fueling and ordnance were being loaded on planes, setting off massive fires. But a quick-thinking Kiefer ordered ballast tanks be flooded, purposely causing the ship to list. That caused burning fuel and equipment to slide off the deck and into the sea. He also turned the ship so the wind would blow smoke and flames away from men fighting the fires.

Then a second kamikaze hit the carrier just below the bridge where Kiefer was overseeing fire control. The captain had more than sixty-five shrapnel wounds and a badly broken arm. However, he refused to leave the bridge until the fires were controlled and every wounded man had been cared for. For this extraordinary action, Kiefer was awarded the Distinguished Service Medal. At the medal award ceremony, Secretary of the Navy James Forrestal dubbed Kiefer “The Indestructible Man.”

World War II ended before Kiefer recovered from those injuries. He was promoted to the rank of commodore and named commander of the naval air station at Quonset Point, Rhode Island.

It is a cruel irony that only three months after VJ Day, the announcement of the Japanese surrender, and while employing a form of transportation he had pioneered, Dixie Kiefer proved to not be indestructible after all. He was returning from a trip to New York City with five other Navy personnel when their airplane encountered bad weather and crashed into Mount Beacon, New York, above the Hudson River. All six men died. One way Kiefer’s body was identified was by the plaster cast still on his broken arm from the kamikaze assault on Ticonderoga. It is noteworthy that two of those who died with Kiefer were enlisted men, given a lift by the commodore. Kiefer was known as a “sailor’s skipper,” beloved by all, an indication of his leadership style. And one of the men was African American, a sailor who had repeatedly been denied pilot training by the Navy because of his race. Kiefer was actively working to change that policy.

More cruel coincidences: the man who gave “indestructible man” his nickname, James Forrestal, was born in Beacon, New York, not far from where Dixie Kiefer died. And the crash occurred on November 11. That was Armistice Day, marking the end of World War I.