The "Doughboys" Made their Biggest Contribution Fighting Postwar Hunger

William Lambers is the author of Ending World Hunger. His writings have been published by the Washington Post, History News Network, Cleveland Plain Dealer, Baltimore Sun, and many other news outlets. Lambers recently volunteered to write the Hunger Heroes section of the WFP's educational game FreeRice. 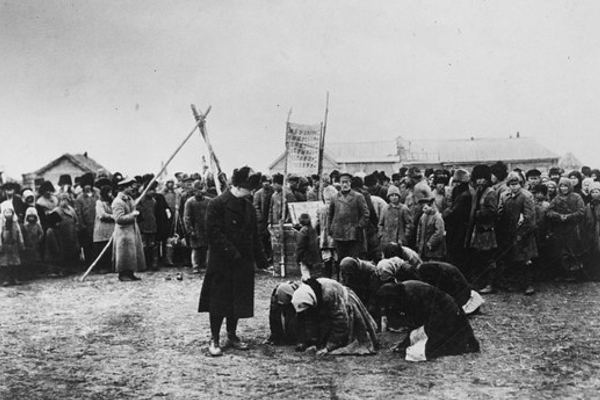 It was April, 1917 when the United States entered World War One and America's soldiers, nicknamed the Doughboys, headed to Europe to fight Germany. Less known about the Doughboys is their role in feeding the hungry in Europe, even long after Germany had been defeated.

Following the Armistice of November 11, 1918, the nation of Latvia tragically saw no end in fighting. Latvia was invaded by the Communist Bolsheviks from Russia. The occupation led to severe food shortages in early 1919.

The Allies, including German forces as part of the Armistice, fought to retake Latvia's key port city of Riga from the Communists in May.  Knowing that people were starving in Riga, the American Relief Administration (ARA) took action. Doughboys were part of this special force for WWI relief.

Lt. George Harrington led a 40 car train of food supplies toward Riga to feed the starving civilians. They met resistance from the Communist Bolsheviks. Captain Evan Foreman reported in a radiogram “Between Libau and Riga, on Monday night,a band of robbers assaulted the train guard. The guard returned the hostile fire and an armoured train furnished machine - guns which completely routed the assailants."

There were even more challenges for the ARA Doughboys. Ten miles short of the train's destination, a worst case scenario was realized. The tracks were torn up, another consequence of war. Harrington wrote "During the advance the railroad between Mitau and Riga was destroyed for several kilometers."

We learn in school never to give up, and to overcome obstacles. Lt. Harrington and his small force of doughboys epitomized that spirit. They went to work repairing the tracks and getting the help of anyone they could. Herbert Hoover, who led WWI relief, recalled in his memoirs that President Woodrow Wilson said "We need a lot more Harringtons" fighting hunger.

Harrington’s force got the train moving again and it arrived in Riga on May 29. What they saw shocked them. There were dead bodies from the fighting and also starvation.

Now that Harrington and his team arrived with food, they had to arrange an orderly distribution. But where do you begin amid such chaos? They went to the American consulate for help but it had been abandoned when the Communists had attacked. Then suddenly a frightened woman peeked through a crack and announced herself.  Miss Pawla Poedder, of Latvian descent, had been the secretary of the consulate for five years. She had been left in charge when the diplomats fled after the Communist attack. It was quite a promotion.

A story in Independent magazine tells how Ms. Poedder spent sleepless nights waiting for the Communists to do the worst, especially after posting a picture of President Wilson on the consulate door. The communists even threatened to seize typewriters. She never gave hers up.  Showing courage earned her the respect of the occupiers.

Poedder went into action using the local contacts to help organize the food distributions. Ms. Poedder was struggling with hunger herself and showed tears of relief that the Americans had returned. The Independent said that Uncle Sam owed Poedder a medal for her bravery.

But now today we face the challenge of famine threatening Yemen, where the UN World Food Program (WFP) has low funding for its mission to feed 13 million civilians impacted by the civil war.  In South Sudan 7.24 million people are in danger of severe hunger as we approach summer. WFP is also low on funding there. Burkina Faso and the Sahel region are also in danger of famine.

Each of us can donate or write to our elected officials urging food and peace for these countries. Like the Doughboys we must never give up the fight against hunger.