The Forgotten History of Solidarity Between Black and Indigenous Freedom Movements

Kyle T. Mays (he/his) is an Afro-Indigenous (Saginaw Chippewa) historian of Afro-Indigenous history, urban studies, and Indigenous cultural studies. He is the author of An Afro-Indigenous History of the United States (Beacon Press, 2021) and City of Dispossessions: Indigenous Peoples, African Americans, and the Creation of Modern Detroit (University of Pennsylvania Press, 2022). 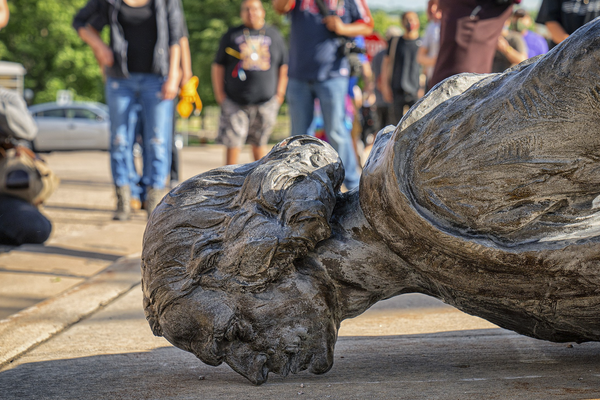 Members of the American Indian Movement (AIM) took down a statue of Columbus near the Minnesota State Capitol in St. Paul during protests over the killing of George Floyd by Minneapolis Police. Photo Tony Webster, June 10, 2020. CC BY 2.0

Since the emergence of Black Lives Matter in 2013, the Standing Rock Sioux-led global protest against the Dakota Access Pipeline, and more recently, the murders of Breonna Taylor and George Floyd, Black and Indigenous co-resistance has once again come to the forefront of our national consciousness. Instead of calls to “police the police” or for “community control” of police from the 1960s, activists have demanded defunding the police or abolishing them altogether. This is an example of how Black and Indigenous peoples have tried to reimagine the foundations of American society.

The current moment of solidarity is inspiring, but not new. We have forgotten a similar time in history when African American and Native American activists battled against colonialism and white supremacy, respecting the uniqueness of both groups’ history, but understanding that an end to US empire would require solidarity. Following a discourse promoted by some Indigenous intellectuals and activists, who claim that Indigenous peoples never found common ground with people of African descent, or even worse, that justice claims based on Indigenous treaty rights were profoundly and incompatibly different from Black radicals’ calls for ending oppression, instances of Black-Indigenous solidarity have been almost completely erased from the historical record.  During the Black and Red Power era of the late 1960s through the 1970s, Black and Indigenous activists fought to create solidarity in discourse and practice. Indeed, the 1960s and 1970s represents the epitome of Black and Indigenous solidarity, an initial moment of agreement when both movements understood a joint struggle against settler colonialism and white supremacy.

In 1974, Stokely Carmichael, a veteran activist in the struggle for Black Freedom, came to St. Paul, Minnesota in order to demonstrate his support for his Indigenous brothers and sisters in revolutionary struggle. They were on trial for actions at Wounded Knee in 1973, in which they sieged Wounded Knee, South Dakota for seventy-one-days. He presented “one of the clearest descriptions of the common ground on which black, red, and all oppressed peoples can stand.” Carmichael believed in third world solidarity, where Black, Indigenous, and all oppressed people could unite against the imperial powers of the world, especially the United States. He believed in a Black revolutionary struggle that understood that the US was Indigenous land—it belonged to Indigenous peoples, and the US stole it. Like Malcolm X, who argued that land was the goal for all revolutionary independence, Carmichael argued, “when you want a revolutionary struggle, you must struggle for land. If you do not own land or control land you will be under the power of he who does own and control land.” More importantly, he argued that “if you don’t own land you cannot have a nation.” Carmichael believed in the power of nationalism. Even Standing Rock Sioux intellectual Vine Deloria Jr., in Custer Died for Your Sins (1969), commented that Carmichael’s call for nationalism was important because, “for many people, particularly those Indian people who had supported self-determination…Stokely Carmichael was the first black who said anything significant.” While Deloria flattened the longer history of Black radicals calling for self-determination or calling for Black people to leave the US altogether, he was right about Carmichael.

Carmichael also understood that in order to work together, Indigenous peoples had also to understand that a major part of their subjugation was racial capitalism, rooted specifically in Indigenous dispossession. Carmichael opined, “it is this system—which says to get money by any means necessary—that is responsible for the condition of the red man today. It is this system that has allowed the Europeans to decimate the red man and his land.” Though he did not articulate it in this speech, Carmichael clearly understood that the foundations of US democracy—specifically its emergence as foundational to the oppression of Black and Indigenous peoples—was racial capitalism, which included economic subjugation and the dispossession of Indigenous land. Carmichael further argued, “I come from a struggle people. Since I have realized that my whole life has been a struggle against a capitalist system of oppression, I have a responsibility to direct the rest of my life to continue fighting against it.” Finally, Carmichael told his largely Indigenous crowd that Black people would shed blood “for the struggle of the red man” because it represented the larger struggle for humanity. As a member of the All African Peoples’ Revolutionary Party, a pan-African, Marxist organization founded by Kwame Nkrumah in 1968, he understood the importance of coalitions with people from differing groups, and the dedication required to ending racial capitalism. Indeed, Nkrumah argues in Class Struggle in Africa (1970) that wherever people of African descent live, they must resist colonialism. Carmichael understood Nkrumah’s point, showing up consistently for Indigenous peoples, including at the Occupation of Wounded Knee in 1973. Admiration was not one way. Indeed, Indigenous activists also appreciated the nationalism of Black people.

In a 1976 interview published in the Black Scholar, a Black Studies journal, Dennis Banks, a cofounder of the American Indian Movement (AIM), observed the meaning of Black struggle as an influencing force on Indigenous struggles. Though he mentioned that the brunt of everyday colonialism was the impetus that led to Indigenous peoples beginning to resist in the public forum, it was also their respect for Black activists like Malcolm X. For Banks, “Malcolm X was standing, and god damn it we should have been standing right along with him” because Malcolm was fighting to change the fundamental conditions of people of African descent and all oppressed people. Banks appreciated the frankness and manner in which Malcolm described American racism, and spoke to the heart of the matter in a way that the people could understand.

By 1991, after the US government had decimated Black and Indigenous movements with killings, infiltration, exile, and imprisonment, Carmichael and another co-founder of AIM, Vernon Bellecourt, remained committed to each other. They met in Libya, as Bellecourt received the Gaddafi Human Rights Prize, named after Muammar Gaddafi, the longtime leader of Libya, for his activism among Indigenous peoples. The prize was awarded to Nelson Mandela in 1989 and to Palestinians in 1990. Bellecourt showed appreciation to Carmichael, arguing, “He came out of the struggles of Africans in America. And he came to our people, and he offered his friendship, his love, his respect, and his solidarity.”

What can we learn from the Black and Red Power movements, in the interest of building these forms of solidarity for today? First, we must center Indigenous land as a key part of our collective liberation. It is Indigenous land, and from there, people of African descent must be in solidarity with Indigenous peoples in any type of movement that calls for the transformation of society. Even in discussions of reparations, we must ask how can we compensate the descendants of enslaved peoples and return stolen land to Indigenous peoples. By also seeking a return of land, we can radically think about the possibilities of our shared futures. Second, nationalist principles might organize individual group ideology, but critical nationalism also must be flexible in order to create progressive social movements that aren’t always readily about one’s own group. Finally, Carmichael, Bellecourt, and Banks remind us that actively working in solidarity requires hard work, constant reevaluation, and a broader commitment to humanity.