Fashion and Freedom from Suffrage to AOC

Einav Rabinovitch-Fox teaches U.S. and women’s history at Case Western Reserve University in Cleveland, OH. She writes on the intersections between fashion, politics, and modernity. Her new book is Dressed for Freedom: The Fashionable Politics of American Feminism. 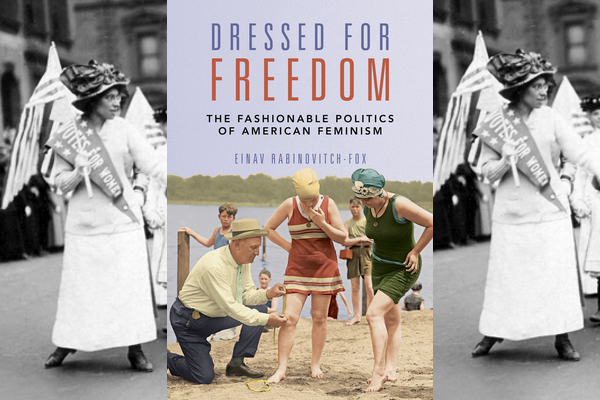 This September, after one year hiatus because of the pandemic, the rich and famous once again gathered in New York City for the annual Met Gala. Celebrating the Museum’s new exhibition “In America: A Lexicon of Fashion,” the evening was themed around the idea of “American Independence” as guests (and their sponsors) demonstrated their interpretation of this concept through their clothes.

While some chose to highlight American designers, or to reference Hollywood’s iconic stars, others brought their politics to the red carpet, demonstrating that politics are a huge part of what defines American fashion. Indeed, although Alexandria Ocasio-Cortez’s “Tax the Rich” dress received most of the attention, she was not the only one who used her outfit to make a political statement. Representative Carolyn Maloney showed her support for women’s rights by wearing a dress in suffrage colors and slogans like “ERA Yes” and “Rights for Women” modeled like the sashes suffragists donned.

Poet and activist Amanda Gorman drew attention to immigration when she wore a blue dress reminiscent of Lady Liberty, while holding a book-shaped clutch with a golden emblem of the phrase “Give Us Your Tired” on it. Soccer athlete Megan Rapinoe and actor and writer Dan Levy used their appearance to show support for LGBTQ rights, while model Cara Delevingne literally wore her message on her chest with an armor-like vest with the words “Peg the Patriarchy.”

Given these examples, it is somewhat surprising that in the exhibit’s new fashion lexicon the word “politics” doesn’t appear. The exhibit showcases 12 themes that comprise what its curators envision as the modern vocabulary of American fashion: Nostalgia, Belonging, Delight, Joy, Wonder, Affinity, Confidence, Strength, Desire, Assurance, Comfort, and Consciousness. Yet, especially in the American context, politics and fashion are intrinsically linked to one another, and this connection is important to the understanding of both.

Another word that is missing from the lexicon and is also associated with America is “Freedom.” Clothes—and fashion—were often at the center of social struggles to gain freedom and equality, not only as symbolic gestures but also as ends in themselves. Particularly in the feminist movement, sartorial freedom was part and parcel of a broader agenda for women’s rights.

Although fashion and feminism are often positioned as opposing forces, the idea that clothing and adornment practices hinder political activism is very far from the truth. Throughout the 20th century, feminists did not view fashion as a frivolous or marginal issue, but as a useful means to redefine gendered, classed, and racialized notions of femininity, as well as to promote feminist agendas. As they employed mainstream fashion styles, they expanded the spaces of feminist activism beyond formal organizations and movements, reclaiming fashion as a realm of pleasure, power, and feminist consciousness.

Much of the feminist effort to achieve sartorial freedom focused on implementing styles that allowed for comfort, mobility, and freedom. Women sought to relieve themselves from restrictive undergarments and long trailing skirts, while pushing for loose silhouettes and utilitarian elements in clothing such as pockets and zippers. In the 1920s, women equated their choice to wear knee-length skirts with their right to vote, while suffragists argued that pockets were the first step in gaining equality between the sexes. Pockets, just like voting, became a feminist rallying cry for freedom and equality. By the 1940s, sportswear, a style that extolled comfort and mobility, and was most identified with its female designers, became, according to Dorothy Shaver, the president of the Lord & Taylor department store empire, the epitome of the “American Look.”

Yet, the goal was not just to seek clothes that would provide these freedoms, but that such outfits would also be popular, beautiful, and part of the mainstream – or in other words, fashionable. Especially for women who were barred from positions of power due to their class or race, the ability to claim “fashionability” was sometimes more important than the comfort and mobility that these styles provided their bodies. Immigrant women, like early 20th century labor activist Clara Lemlich, combined their demand for labor rights with the respect they deserved as “fashionable ladies.” Suffragists argued that their fashionable taste was evidence of their worthiness to be voters. And young Black migrants to cities in the 1920s adopted flapper styles as part of their demand for racial inclusion.

These women faced criticism. However, they did not think that fashion was a distraction. On the contrary, it was claiming their right to participate as equal members in the fashion world that helped them to imagine their role as equal members in society. Fashion, as they understood it, and as many in the Met Gala also understand, has power, and as such it can be used to convey and promote political agendas in creative ways.

While most of us are not writing manifestos to justify what we wear, our clothes sometimes can carry a loud message. From the pink “pussy hats” of the 2017 Women’s March to face masks with BLM written on them, fashion can be a useful tool in the activist’s box as well as a personal form of individual expression. And especially in an event like the Met Gala, when the eyes of the media and the attention of the world are more open to hear this message – fashion can speak volumes.

Rather than treat the Met Gala’s red carpet as a space of escapism, Ocasio-Cortez, Maloney and the others turned it into a protest ground. And as they wore their politics on their sleeves, or in the case of Ocasio-Cortez—on their back—they also showed us what “American Independence” is all about. Advancing policies and political agendas are not restricted to the halls of Congress, they can be manifested in the clothes we wear, whether it is a white suffragist dress from 1917 or a white “Tax the Rich” dress from 2021. Even if the Costume Institute chose to omit “politics” and “freedom” from its new lexicon of American fashion, it was the guests of the Gala who put these words back in.

Yet even more importantly, fashion, freedom, and American independence have been and are still connected to ideas of women’s rights and equality. Ocasio-Cortez did not just protest against capitalism, she also made sure the dress had pockets.