Edward Rafferty is an independent scholar and teacher at Concord (MA) Academy. 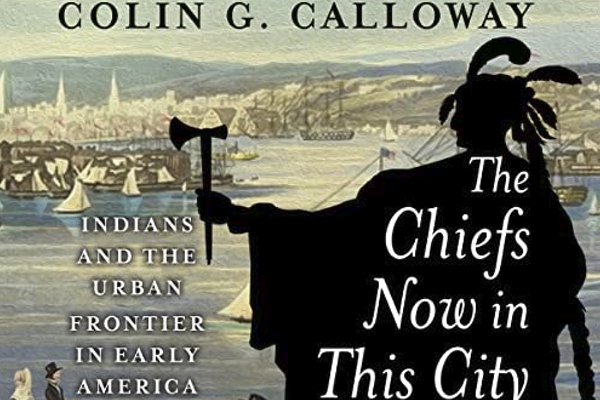 Travel through any New England town and you will immediately see the historical references on the landscape. The ‘last’ Indian who lived in this space; the ‘first’ settler (invariably an Englishman) who lived nearby. The ‘last’ Indian wigwam or longhouse or village; the ‘first’ (settler) house or town or trading post. You will see the ‘first’ church, and the ‘first’ road. And, of course, there are the “lasts.” The “last” Indian who lived in the town; the “last” Indian village or fishing weir or midden. The town that I sit in as I write this, Concord, Massachusetts, and surrounding towns have all done this with multiple monuments to the firsts and lasts of settler-colonial replacement. As historian Jean O’Brien (Ojibwe) has argued, “firsting” and “lasting” is an American national tradition – a form of colonial erasure of the people(s) who previously occupied, lived, and made cultures and institutions on the land. In some cases, you will see ‘Indianized’ aspects to this erasure. Occasionally you do see artifacts of previous occupation: Indian names that mark certain features on the landscape; or, Indian names that mark townships. But this only serves to reinforce the settler colonial erasure more completely – these are simply remainders of a long ago, and, we are to understand, no longer relevant ancient past.

In many larger cities (especially in the Northeast but elsewhere as well) the erasure of Indian presence or even existence is often more complete. Indians were not part of urban space, this history and naming tells us. Indians lived in “wild” places or rural places or small places; they lived in the places between the built landscapes that colonial settlers created in establishing civilization in the New World such as Boston, New York, Philadelphia, Albany, or Montreal. But, as Colin Calloway has long pointed out, this was always simply a colonial lie agreed upon. It was never a colonial reality. In his new book, ‘The Chiefs Now In This City’: Indians and the Urban Frontier in Early America, Calloway tackles this lie directly and provides a wealth of detail, narrative, and remembrance of the American Indian peoples who moved through, stayed, visited, and populated the cities of colonial and early national America. His central goal, he argues in his introduction, is to provide a “means [for] exploring plural understandings of the past” (14). As Calloway points out: “Many historians have pored over the writings of colonial travelers for deeper understandings of Native American society and culture, yet few have looked to Native American travelers for alternative understandings of early American society and culture. An extensive literature examines the imperial gaze, but Indigenous eyes are as important as imperial eyes in understanding contact.” (14)

Calloway organizes the book topically to examine the Indian relationship to colonial cities. In some ways each chapter can stand alone in looking at an aspect of the indigenous relationship to urbanism (something very useful for the classroom use of the text). He notes at the outset, for example, that towns and cities were never unknown spaces to indigenous peoples. They had already lived and created large townships and cities long before European invasion in places as varied as the Haudenosaunee (Iroquois) town of Hochelaga, near modern Montreal (which had at least 3000 inhabitants); or in the Wichita (Quivira) town of Etzanoa, near the junction of the Arkansas and Walnut rivers in modern day state of Kansas (which had up to 20,000 residents). These towns were places centrally organized around kinship and community – they were important for what they represented for a people rather than simply as large places of commerce. But the main part of Calloway’s analysis is of the port cities along the Atlantic coast built by settler colonial societies. These were, as he argues, “late additions to the urban landscape of North America, and many of them were established at locations where Indian communities had previously existed, sometimes on their very ruins” (25). Each chapter is organized thematically around topics such as what was seen upon arrival in town, the interactions with other Indian peoples while in settler-colonial cities, the risks of visiting settler-colonial cities (especially from disease and violence but also from alcohol consumption), or the performances they witnessed or engaged in while visiting.

The most interesting subject for investigating the imperial gaze is Calloway’s discussions of American Indian views of imperial society. Officials thought that bringing Indian peoples into settler-colonial cities would impress indigenous visitors, and awe them into seeing the wonderful accomplishments of advanced civilization. Native American visitors did often point out the extensive commerce that seemed to be the main purpose of urban spaces – indicating with astonishment the numbers of ships, goods, and shops that populated cities up and down the Atlantic coast. Since Indian cities were primarily spaces of community building and culture making, the emphasis on economic practices attracted much of their notice. Commerce was not the centerpiece of indigenous community life. The emphasis on commerce and the hope of inspiring awe were, in essence, bold attempts to establish settler-colonial superiority. But for most Indian peoples it was a wasted effort. Although American Indians often enjoyed their time in the settler-colonial cities of 17th and 18th century North America, they also saw urban filth, poverty, and frequent injustice that shocked them. Indeed, it helped to establish a deepening Native American critique of how settler colonial society functioned and the purposes that organized the functions of settler-colonial communities. Most often, Indian viewers and visitors pointed out the hypocrisy of settler-colonial pretensions to superiority. For example, the Seneca leader Red Jacket – who frequently spent diplomatic time in colonial New York’s urban spaces – said to a Quaker missionary that “the white people, who have a good book called the Bible among them, that tells them the mind of the Great Spirit…are so bad, and do so many wicked things…” (154).

The only problem with Calloway’s work is that we simply want to know more. This work focuses upon the late colonial and early national period. In the long term, Calloway has provided a guide to how to think about American Indian peoples and their connection to urban space in the 19th century and beyond. Searching for works on urban America and Native American life reveals only a few large-scale works but they are certainly increasing; after all, the vast majority – more than 70 percent – of American Indian peoples live in cities today. Much of this recent historical work focuses upon the assimilation and termination periods – particularly after the federal Urban Relocation Program instituted during the Truman and Eisenhower administrations. Novels and memoirs have also captured this experience from the mid-20th century to the early 21st century. We should regard this as a reclaiming of indigenous spaces – a return of Indian lives and voices and experiences to the center of thinking about urban America. For instance, in the Cheyenne-Arapaho writer Tommy Orange’s award winning, There, There: A Novel, he centers the experience of late 20th and 21st century indigenous Americans as “present-tense people, modern and relevant” in the cities of the American West (the book focuses on Oakland).

Calloway has done a major service for scholars and teachers of Native America – and even more for United States history in general – to broaden our outlook to the ways that American Indian peoples interacted with and shaped American urbanism dating well back into the settler-colonial invasion. Let us hope that indigenous urbanity is better understood as part of the US past, the US present, and the US future.