For 38 Years of American History, There Has Been No Vice President 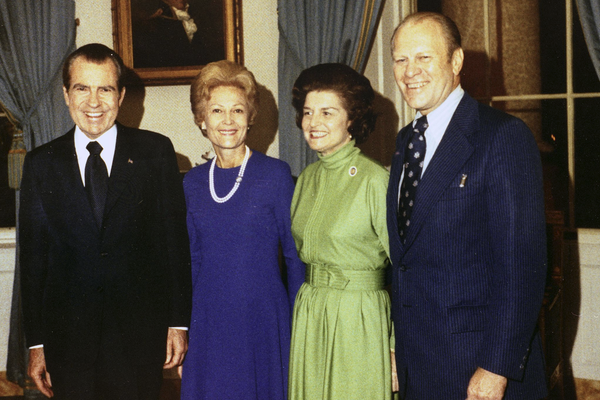 The Nixons celebrate with the Fords after Rep. Gerald Ford's appointment to replace Spiro Agnew as Vice President, 1973

Throughout much of our nation’s history, vice-presidents have been neither seen or heard. In fact, very often there hasn’t even been a vice president at all. On December 19, 1974, Nelson Rockefeller was sworn in as the forty-first vice president of the United States. Since that moment, we have had a vice-president. What is surprising, is that for over thirty-eight years of our country’s existence, we did not have a vice president, which represents about twenty percent of our country’s history. Before, the passage of the Twenty-Fifth Amendment in 1967, there was not a constitutional mechanism for a replacement. In the 19th century, the office was vacant an astonishing twenty-six percent of the time.

Eight presidents have died in office, four by assassins’ bullets. Each time this happened, the vice president ascended to the White House, leaving the vice-presidency unoccupied. What is often overlooked is that seven vice presidents have also passed, leaving the office without a replacement for the remainder of that term. Curiously, these seven died within a period of just over one hundred years. George Clinton died April 20, 1812, and on October 30, 1912 James Sherman died, just six days before the election. Six times in history, we have had no VP for three and a half years, almost seventy five percent of the presidential term.

The Constitution of the United States, warts and all, is a remarkable and enduring document. It has withstood the test of time, and is malleable enough to accommodate airplanes and automobiles, cameras and computers, and telegraphs, text messages, and trains. The vice-presidency almost seemed like an afterthought when the Founding Fathers met in Philadelphia in the tepid summer of 1787. The first time that it was discussed was after September 4, in the last two weeks of the convention. The deliberations were centered more around the mechanics of presidential elections than succession. Several prominent members of the delegation, ironically including future vice-president Elbridge Gerry, said they were “against having any vice-president.” Initially, the runner-up became the vice-president.  The system worked out fine, until the development of political parties, which did not exist in 1787.

A number of adjustments would follow, the first being the Twelfth Amendment. This cleaned up a controversy after the 1800 election when Aaron Burr, who was intended to be Thomas Jefferson’s vice president, entertained accepting the presidency himself if offered.

Three times has the next person in line after the vice presidency changed. The Presidential Succession Act of 1792 placed the President Pro Tempore of the Senate behind the VP if necessary. Surely you remember that office from your high school civics final exam (it’s currently held by Senator Patrick Leahy of Vermont). One would be a rather serious scholar of American History to know the names of Willie Person Mangum, Lafayette Sabine Foster, John Hay, and/or John McCormack, all of whom were a heartbeat from the presidency.

John Tyler became the first “accidental” president in April of 1841 when William Henry Harrison became the first president to die in office. There was some controversy if Tyler truly became president, or was “acting,” but Tyler insisted he was the chief executive and defiantly “returned any letter unopened if it addressed him as anything other than "President of the United States."  Tyler set a precedent that the others would follow. On February 28, 1844, a constitutional challenge nearly occurred. Tyler was aboard the USS Princeton (but fortunately below deck, courting the woman, thirty-three years his junior) when a naval gun exploded on deck, killing six. Had Tyler perished, Senator Mangum would have become the eleventh president of the United States.

Andrew Johnson became president in 1865 after the assassination of Abraham Lincoln. If Booth co-conspirator George Atzerodt hadn’t drank away his courage at the hotel bar where he and Johnson stayed and carried out his assignment to murder Johnson, Lafayette Sabine Foster would have been our eighteenth president. Johnson, the first president to be impeached, was able to keep his job by just one vote in his 1868 senate trial. Had one vote switched, Benjamin Wade would have become “acting president.”

Eighteen years later, Congress rewrote the earlier law and passed the Presidential Succession Act of 1886. This made the Secretary of State third in line, because when President James Garfield died in 1881, and Vice President Thomas Hendricks died in 1885, there was neither a president pro tempore or speaker of the house. One problem is that Congress was rarely actually in session back then. In 1885, it was technically ‘there’ just seventy-six days. President Chester Arthur, Garfield’s successor (1881-1885) was diagnosed with Bright’s disease early in his presidency, which would take his life just twenty months after he left office. These men were not immortal, particularly with 19th century medicine.

Theodore Roosevelt became the youngest chief executive in September of 1901 when William McKinley succumbed to a gunshot wound inflicted eight days earlier. A bit less than a year later, Roosevelt was involved in a carriage/trolley collision in Pittsfield, Massachusetts. In that mishap, William “Big Bill’ Craig became the first Secret Service member killed in the line of duty. The hyperactive president ignored his injuries, and a few weeks later his leg became infected while campaigning in Indiana, requiring surgery. Newspapers called the medical intervention a brush with death. Had TR died of the pre-penicillin infection, Secretary of State John Hay would have become the twenty-seventh president. Hay was not only better known than Mangum, Foster, and Wade, but also more qualified, serving as one of Lincoln’s private secretaries as well as other positions before the State Department.

The Presidential Succession Act of 1947 altered succession again, making the Speaker of the House next in line, as it remains to this day (and continues to under the terms of the Twenty-Fifth Amendment). President Harry S. Truman, who succeeded Franklin Roosevelt following his death, thought someone elected, not appointed, should be next in the list of succession if necessary.

When John F. Kennedy was assassinated on November 22, 1963, Vice President Lyndon Johnson’s car followed behind. Kennedy’s body was rushed to Dallas’s Parkland Hospital, and when Johnson arrived, the heart attack survivor (1955) was seen with his hand on his heart (any chest pains may have been from the force of Secret Service agent Ralph Youngblood’s pushing LBJ to the floor of his car after hearing shots). Had Johnson had another heart attack and died (he wouldn’t survive another in January of 1973, at just sixty-four), seventy-one-year-old Speaker John Mc Cormack would have become the thirty-sixth or thirty-seventh president, depending on whether Johnson succumbed before or after being sworn in himself.

If anything, the Twenty-Fifth Amendment was long overdue. History makes one wonder what took so long, considering the frequency with which the country lacked a second in command. The slow death of James Garfield in 1881 over eighty days (from being shot and incompetent doctoring), Woodrow Wilson’s incapacitation for the last eighteen months of his presidency (stroke), Dwight Eisenhower’s multiple issues (heart attack, intestinal surgery, minor stroke), complicated the matter, compounded by the fact that fifteen presidents and vice presidents had died between 1812 and 1963. For a combined thirty-eight years, we did not have a vice president.

Fortunately, that amendment came in handy just six years later when Vice President Spiro Agnew resigned. President Nixon was able to nominate a successor, Congressman Gerald Ford of Michigan, with congressional approval. Eight months later when Nixon resigned, Ford became the thirty-eighth president of the United States, and the only person to hold that office without being elected by the American people.  He then appointed former New York Governor Nelson Rockefeller as his VP.

Jimmy Carter and his Vice President Walter Mondale changed the nature of the office, giving Mondale far more responsibility and inclusion into decision making. Richard Cheney was undeniably one of the most influential vice presidents. Mike Pence has certainly been in the news after the Trump presidency, for better or worse, and isn’t hiding his own ambitions to occupy the Oval Office. Kamala Harris, finally, became both the first woman and person of color to serve as vice president.

One of the vice presidential duties the Constitution does stipulate is breaking a tie vote in the Senate (Article I, Section 3, Clause 4). This has happened 291 times in history through May 12, 2022. With the current 50-50 split in the Senate, Vice President Kamala Harris has been performing this duty frequently, twenty-three times already. When Georgia’s Democratic candidates, Jon Ossoff and Raphael Warnock, won their runoff elections, the Senate was tied for the fourth time in history, something that previously occurred in 2000, 1954, and 1881.