Gregory T. Moore is a longtime voting rights activist and author of Beyond the Voting Rights Act, the Untold Story of the Struggle to Reform America’s Voter Registration Laws. 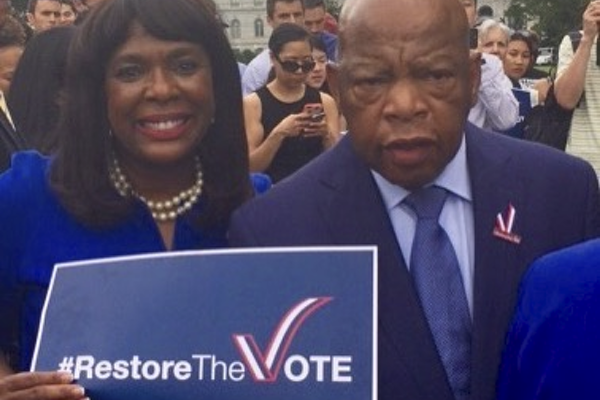 WASHINGTON DC – Now that Congress has returned from the midterm election recess, Democrats in the U.S. House and Senate, and reasonable (or retiring) Republican lawmakers should add the Electoral Count Act and the John Lewis Voting Rights Advancement Act to their housecleaning agenda before the current congress adjourns at the end of the year.

The Voting Rights Act of 1965 has been hailed as one of the greatest victories of the Civil Rights movement. Nearly a century after the 15th Amendment guaranteed Black men the right to vote, the law protected voters from racial discrimination at the polls. A key provision of the law is section 4, which established a formula identifying regions of the country where racial discrimination is more prevalent. Those regions then must undergo a review by the U.S. District Court in D.C. or the Attorney General, required by section 5, of any proposed changes to voting.

But in 2013, the U.S. Supreme Court ruled in the landmark Shelby County v. Holder decision that Congress must come up with a new formula for bailing states into pre-clearance, essentially gutting the VRA. Within hours of the decision, then-Texas Attorney General Greg Abbott announced the state would proceed with a voter identification law that was previously blocked. In the wake of the Shelby decision, Representative John Lewis himself declared in the Washington Post that “The Supreme Court has stuck a dagger into the heart of the Voting Rights Act….Although the court did not deny that voter discrimination still exists, it gutted the most powerful tool this nation has ever had to stop discriminatory voting practices from becoming law.”

He turned out to be correct: by 2018, five years after the decision, nearly a thousand polling places were shut down ­– many in Black communities in the south – according to a report in Pew. A 2018 investigation by Vice News found that jurisdictions that had been subject to federal supervision under section 4 shut down nearly 20 percent more polling stations per capita than jurisdictions in the rest of the country. The proposed legislation that bears Lewis’s name would reverse key portions of the ruling, the first step to correcting the corrosive effect Shelby has had on our democracy.

Congress’ failure to pass a new formula since the Shelby decision has allowed Texas and other states to restrict access to voting. While Congress has shifted much of the blame onto the Supreme Court, lawmakers themselves have the power to repair the damage that the Shelby decision has inflicted upon voters. Democrats have pointed to former President Donald Trump’s deliberate spread of misinformation and the January 6th riots as existential threats to our democracy, but a more widespread and insidious threat to our enfranchisement has come from the Shelby decision.

In my book Beyond the Voting Rights Act, I recount the battle for voting rights and democracy reforms that began in the early 1970s and continued through the early 2000s. The passage of the VRA in 1965 was just the first step toward guaranteeing all Americans, particularly racial minorities, the right to vote. Congress needed to reinforce the VRA through subsequent reauthorizations. Each Voting Rights Act reauthorization in 1975, 1982, 1992 and 2006 received bipartisan support in Congress. Voting rights advocates would continue this trend by working across party lines in Congress to enact the National Voter Registration Act of 1993, (NVRA) and the Help America Vote Act of 2002.

Shelby swept away those decades of hard-fought gains by Congress and civil rights leaders. Texas was not the only state to pounce on a weakened VRA. North Carolina also introduced new voter suppression legislation immediately following the SCOTUS decision. State lawmakers had already started introducing bills meant to erode voting rights after the 2010 elections, but their efforts flourished after Shelby. By 2016, new voting restrictions cropped up in 14 states including Alabama, Arizona, Indiana, Kansas, Mississippi, Nebraska, New Hampshire, Ohio, Rhode Island, South Carolina, Tennessee, Texas, Virginia and Wisconsin, according to the Brennan Center for Justice.

The Supreme Court continued siding with state laws that diminished access to voting after Shelby. In 2018, the court upheld Ohio’s voter roll purging law, which allows the state to eliminate voters from registration rolls if they are inactive. A 2019 analysis from the Brennan Center reported that counties with a history of voting discrimination purged voter rolls at a higher rate.

The proverbial leash has been taken off the states as the Department of Justice and federal courts are no longer able to preclear a flurry of new election procedures to ensure they do not violate the Voting Rights Act. Since the VRA was enacted, it had stopped thousands of state and local proposed regressive election-related bills from ever being enacted into law. Now that preemptive protection against voter dilution and suppression schemes has vanished.

States moved quickly to erect more barriers to voting that stripped many more Americans of their voting rights. Yet federal lawmakers have not reacted with the same level of urgency that such a danger requires. Congressional Democrats have held a series of mostly symbolic votes this session to repair the VRA  and expand voting rights. They have effectively sounded the alarm, but too many have used election deniers as “the existential threat to our democracy,” when the failure to pass a fix to the VRA poses an even greater threat in the long-term survival of our democracy.

In the upcoming lame duck session and next year’s new divided House and Senate, Republican and Democratic members in both houses of Congress still have the obligation to not just sound the alarm but work together to restore the VRA to its full strength to ensure all Americans have the right and the freedom to vote. With another pivotal presidential election season in 2024 on the horizon, Congress must act now.

The passage of the John Lewis Voting Rights Advancement Act is not the only action Congress can take now to help save our Democracy during this time of crisis. It can pass the Electoral Count Reform Act in the US Senate and the Presidential Election Reform Act in the House that have both been introduced on a bipartisan basis. These acts, while not a panacea, will help remedy the confusing procedures related to the official counting of electoral votes that spurred thousands of Trump supporters to storm the Capitol in Washington. The ambiguity of the current Electoral Count Act led those who took part in the January 6 riots to mistakenly believe that the vice president, who is only authorized to announce the results, could in fact override the votes of over eighty million American citizens who voted for Joe Biden.

Democrats still hold a narrow majority in both houses of Congress and control of the White House. Given the substantial number of retiring members, a new “coalition of the willing” needs to come together on a bipartisan basis to protect our democracy from further erosion. The American voters successfully sent a resounding rejection to most (although not all) of the election deniers who were on the ballot in November. But a newly passed Electoral Count Reform Act and a fully restored Voting Rights Act passed on a bi-partisan basis would go even further to protect our democracy and end most of the efforts now underway in states to undermine the legitimate administration of our elections.

Beyond the Voting Rights Act can serve as a timely reminder of the importance of placing democracy and the voting rights of our citizens over the hyper partisan political dysfunction that has consumed Washington and much of the nation. The book recounts how Congress succeeded in enacting the NVRA on a bipartisan basis in a vastly different yet still challenging political climate. The greatest impediment to restoring the VRA now is the hyperpartisanship that has stymied nearly every piece of legislation at the federal level. The Electoral Count Reform Act and the John Lewis VRA will not succeed without the support of both parties in both its passage and implementation. We must remind lawmakers of their duty to their country above party and how allowing the disenfranchisement of millions of Americans can lead to a fate worse than what we witnessed on January 6.