Will the Republican's Tilt Toward Isolationism End?

Waller R. Newell is Professor of political science, philosophy and humanities at Carleton University. His most recent book is Tyranny and Revolution: Rousseau to Heidegger (Cambridge University Press). 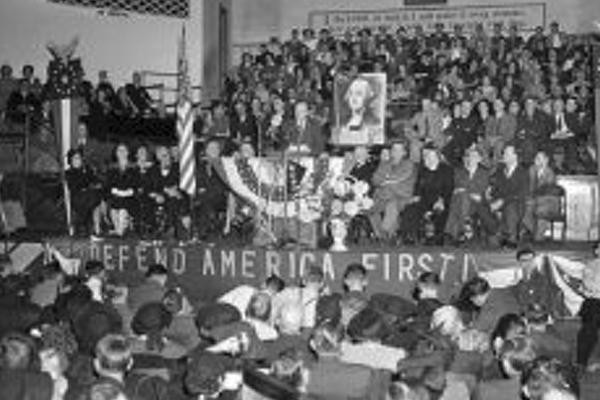 Asked "which is the more hawkish party,” anyone remembering the presidencies of Richard Nixon, Ronald Reagan, George H.W. Bush and George Bush would immediately answer "the Republicans.” They would remember that the Democrats, shattered by the Vietnam War, had renounced what President Carter termed "the inordinate fear of Communism,” while the hawkish foreign policy stance of FDR, Truman, Acheson and JFK migrated to the Republicans. That was followed by Reagan’s military suppression of a Soviet-inspired coup in Grenada and full-scale land wars under the Bush administrations, culminating in the toppling of Saddam Hussein and the Taliban in Afghanistan.

But during Ukraine's recent war to repel Russia's invasion, those roles have been begun to be reversed. The Biden administration, along with NATO, pledged military assistance to Ukraine, which after a slow start, has been robust. Apparently the Democrats are now the party of neoconservatism. By contrast, Republican opposition to funding Ukraine’s war effort grew from three to forty-seven no votes, and likely incoming Republican Speaker Kevin McCarthy has said there will be no “blank check” for more assistance.

How did this happen? Over the course of the last decade, the base of the Republican Party, and especially the younger generation, has returned to a wave of isolationism not seen since Herbert Hoover, and in its more extreme reaches redolent of Colonel Lindbergh and Father Coughlin. Some of its adherents, like Mollie Hemingway, make a defense of American noninvolvement in foreign wars whose pedigree extends all the way back to George Washington and Thomas Jefferson, who said that the U.S. should have commercial relations with all nations and alliances with none. She condemns Putin's aggression, but maintains that the U.S. should not be directly involved by arming Ukraine. I don't agree, but it is a reasoned stance.

Some Republican opponents of U.S. involvement, however, have actually defended Putin's aggression. Their most visible public figure is TV pundit Tucker Carlson. He believes that Ukraine provoked the Russian invasion through its bid to join NATO, echoes Putin's claim that Ukraine isn’t a real country but rather a Russian colony, and maintains that Russia has legitimate security concerns over its borders with NATO. But one wonders what legitimate security concerns could Russia have with those nations unless it was unwilling to live next door to them in peace. Putin has made it clear that invading Ukraine is only step one in a geopolitical master plan for reclaiming all the Slavic peoples — Poland, Hungary, Serbia — for the motherland. Long-time isolationists like Holocaust denier Pat Buchanan have reemerged to make common cause with the new. He too believes that Putin’s invasion was justified to preempt Ukraine from joining NATO.

The swerve to isolationism by Republicans was already underway when Donald Trump ran for the presidency, and it was a big part of why he won the nomination and the White House. But its extent was obscured by the fact that Trump was a "hawkish” isolationist in the mode of De Gaulle or Nixon. When he withdrew, it was in strength, including the destruction of the ISIS Caliphate, the bombing of the Syrian air base and the assassination of RPGI General Soleimani. He also made important exceptions to his isolationist preferences such as his strong support of Israel and the Abraham Accords. With him sidelined, Republican isolationism grew more intense and widespread, setting up a tension within the Republican caucus between old guard neocons like Lindsay Graham and younger figures like Lauren Boebert.

Can the Republicans’ isolationist swerve be reversed? Probably not in the short run. U.S. political history has its cycles. Much will depend on how rising new leaders like Governor DeSantis try to straddle the divide. Does it matter? Yes, because the Democrats' apparent embrace of neo-conservative interventionism is opposed by a vocal minority in their own caucus, including a disinclination to serve as Israel's staunch ally. In short, one cannot be certain of how deep this role reversal reaches or whether it is likely to last in the party of George McGovern.

As my new book details, millenarian tyrannies reaching back to the Jacobins, including Bolshevism and Nazism, have always promised that the revolution’s enemies at home and abroad must be destroyed so as to remove the final impediment to a coming utopia of harmonious equality, peace and bliss. Continuing this pattern, Putin's ideologues including Dugin and Prokhanov promise that the defeat of Ukraine will bring us closer to a "new world” of happiness culminating in a world war to destroy the world's true enemy, the U.S.A., justified by a popular Russian conspiracy theory of an oligarchy of the “golden billion” in the West, who in Malthusian fashion are bent on starving the rest of the world of its resources so that they alone can prosper. Russia is depicted as the salvational people which alone can deliver the poor nations of the world from this slow extinction. Given this larger apocalyptic scenario, unless Russia’s invasion of Ukraine is repulsed with finality, it will continue and perhaps expand. We can only see through a glass darkly whether both U.S. political parties will continue to find it in themselves, as did past leaders from FDR to Reagan, to lead the free world against such tyrannical aggression.