The Pope at War: Pius XII and the Vatican's Secret Archives

James Thornton Harris is a features editor for the History News Network. 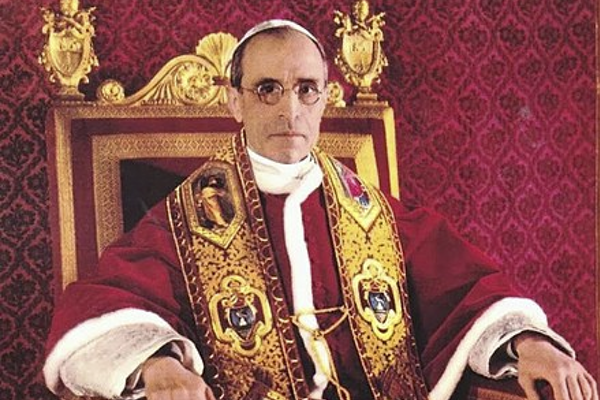 David I. Kertzer: The Pope at War: The Secret History of Pius XII, Mussolini, and Hitler (2022)

“The Pope. And how many divisions has he?”

--Joseph Stalin at the 1943 Teheran conference, responding to Winston Churchill’s suggestion that the Pope be involved in post-war planning.

Pope Pius XII (Eugenio Pacelli, 1876-1958) was the most powerful religious figure in Europe during World War II. Based in the tiny state of Vatican City, he held sway over Europe’s 200 million Catholics. Known as a quiet, intellectual man, fluent in four languages, he served from 1939 until his death in 1959.

His legacy has been dominated by one haunting question: could he have done more to save the Jews?

After the war, the Vatican’s propaganda office mounted a coordinated effort to portray Pius XII as a hero, a moral leader who spoke out against anti-Semitism and pleaded with the warring countries to protect innocent civilians, including minorities. The Vatican claimed, however, that Pope Pius XII, isolated inside Fascist Italy, only heard unverified “rumors” about the organized genocide of the Nazis. Thus, he was unable to provide any help, other than offering prayers, for the Jews in Germany, Poland, Hungary and other occupied countries.

In 2009, his defenders even mounted a campaign to have him declared a saint.  This effort ran into serious opposition from Holocaust survivors and the effort was put on indefinite hold by Pope Francis in 2014.

In the past two decades, a "Pope Pius XII War" has quietly raged among historians with accusers and defenders publishing articles and books about the wartime Pope. Those critical of the Vatican include David Kertzer’s The Popes Against the Jews, Peter Godman’s Hitler and the Vatican and Susan Zucotti’s Under His Very Windows.

In 2022, another book, The Pope and the Holocaust: Pius XII and the Secret Vatican Archives by Michael Hesemann, a German history professor, came out defending the wartime pope and claiming he saved thousands of lives of Jews and other minorities.

In 2020, after much prodding from historians, the Vatican finally granted access to a vast trove of World War II archives, previously locked away since the end of the war.

This breakthrough resulted in tens of thousands of pages of records, letters, reports and internal memos becoming accessible to scholars. The new evidence was damning. Pius XII had received detailed reports about the death camps and had been asked repeatedly by Jewish leaders, Allied governments, and clergy to intervene. Many visitors pleaded with him to speak out publicly against the Nazi’s mass murders. Later, when Mussolini began stripping Italian Jews of their jobs and property, priests and rabbis begged him to intervene with the dictator.

The answer was always “no.”

In his new book, The Pope at War, The Secret History of Pius XII, Mussolini and Hitler, David Kertzer, a history professor at Brown University, details the dark truths of Pius XII’s wartime actions. Kertzer, who has written six previous books about the Vatican in the twentieth century, was one of the first researchers to access the secret wartime archives.

In The Pope at War, he describes how Cardinal Eugene Pacelli, who first served as the Vatican’s secretary of state from 1930 to his election as Pope Pius XII in 1939, received detailed reports about the Nazi’s campaign persecution of the Jews and political dissenters (including anti-fascist Catholic priests) from the very beginning of the Hitler regime.

Later came Kristallnacht in 1938 and then the organization of huge death camps in Poland and Germany. Throughout this dark period, local priests and diplomats sent hundreds of letters, telegrams and detailed reports of the death camps to the Vatican. But the Pope and his close advisors consistently rejected any effort to protest the killings, either publicly or privately. The Vatican’s powerful propaganda machine (two daily newspapers, a radio network and papal messages) ignored the roundups of Jews, and its only references to the war were anodyne statements calling for warring nations to spare “innocent civilians.”

Why was Pius XII so cautious?

Kertzer suggests that while Pius XII was privately shocked, he felt the Vatican and the Catholic Church in Italy and Germany were very vulnerable and could face violent attacks, should he anger either Mussolini or Hitler.

He also feared for the independence of Vatican City. When Italy was reunified in the mid-19th century, the Vatican was stripped of The Papal States, a region in central Italy. Tiny (109 acres) Vatican City, including historic St. Peter’s Basilica, lost its sovereignty and became part of the new, unified Italian state.

After Mussolini became prime minister in 1922, he was eager to cement his power as an absolute dictator in a one-party state. Some 99% of Italy’s 44 million people were Catholic, so the church represented a potential threat. He struck a deal with the Vatican in 1929, known as the Lateran Accords, that recognized Vatican City as a sovereign state, independent of Italy. The Vatican was now free to police its own territory and act as a nation-state, establishing diplomatic relations with other nations.

In return The Vatican agreed to subsume its powerful political party the PPI (Partito Popolare Italiano) into Mussolini’s Fascist Party. It also agreed to re-organize Catholic Action, a nationwide youth organization, into a training ground for fascist ideology.

Many aspects of fascism appealed to the Pope XII and the Vatican hierarchy. Most important was Mussolini’s suppression of Italy’s small, but well-organized Communist Party. Second was the Fascist Party’s rejection of Modern Europe’s popular culture including jazz music, avant garde literature and racy movies. The Vatican was very concerned these would lead to public amorality, particularly sexual promiscuity.

While the official ideology of Italy’s Fascist Party was not as virulently antisemitic as Germany’s Nazi Party, many of Mussolini’s lieutenants were outspoken Jew-haters. They were comfortable in the Catholic Church, which had a 1,000-year tradition of antisemitism. According to early church doctrine, the Jews were condemned to “eternal slavery” for their sin of murdering Jesus and then refusing to accept his teaching.

During the first decade of Mussolini’s dictatorship, Italy’s small (50,000) Jewish population did not face the violent antisemitism unleashed in Nazi Germany. In 1938, however, Mussolini, under pressure from Hitler, began an official purge of Jews from society. Jewish doctors, teachers and civil servants were forced out of their jobs.

In 1940 Mussolini, following Hitler’s example, ordered the construction of some 200 concentration camps across Italy. The first to be confined in them were the thousands of Jewish and political refugees who had fled Germany, Austria and Czechoslovakia. Within three years, most would be sent to their death in Nazi death camps.

After the successful American and British invasion of Sicily, the Italian government formally surrendered to the Allies in May 1943. Six weeks later, with the approval of King Victor Emmanuel III, the Fascist Party leadership had Mussolini arrested. The Germans quickly sent an army to occupy northern and central Italy. Under the direction of the Nazi SS, Italian Jews were rounded up, some living only blocks from the Vatican. Many were sent directly to death camps. This was the darkest hour of Pope Pius XII’s reign, as he refused to speak out or order any clandestine resistance by local priests.

On June 4, 1944, the Allies liberated Rome. Pope Pius XII quickly established a liaison with American generals and greeted groups of Allied soldiers in the Vatican. But he still refused to publicly condemn the Nazis, even as they held out in Northern Italy and continued to send Italian Jews to death camps.

Kertzer saves his own moral judgment for the last chapter of his book. He states:

If Pius is to be judged for his action in protecting the institutional interests of the Roman Catholic Church at a time of war…his papacy was a success. However, as a moral leader Pius XII must be judged a failure.  At a time of great uncertainty, Pius XII clung firmly to his determination to do nothing to antagonize either (Hitler or Mussolini). In fulfilling this aim, the pope was remarkably successful.