Steve Hochstadt teaches at Illinois College and blogs for HNN. 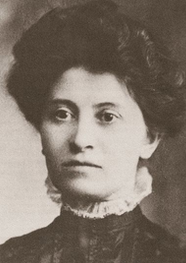 Last Friday, March 8, was International Women’s Day. You might not have known that, since little notice is given to this date in the US, even though American women initiated it. Here in Berlin, one could not help but be aware of this special day, because the city government had declared it a holiday, and everything was closed except restaurants and museums.

A “National Women’s Day” was first declared by women in the Socialist Party of America for February 28, 1909. It was proposed by Theresa Serber Malkiel (1874-1949), whose story exemplifies the history of the uneasy connection between leftist politics and women’s rights in Europe and America, and the continued relevance of a “women’s day”.

As part of the emigration of 2 million Jews from the increasingly antisemitic Russian Empire between 1881 and the beginning of World War I, the Serber family moved from Ukraine to New York in 1891. Theresa went to work in a garment factory. At age 18, she organized the Woman’s Infant Cloak Maker’s Union of New York, mostly Jewish women workers, and became its president. Like many trade unionists, she gradually came to believe that socialism was the only path to liberation for workers and for women. She led her union into the Socialist Labor Party, the first socialist party in the US, the next year. Angered at the authoritarian tendencies of the SLP leader, Daniel De Leon, she and others joined with Midwestern socialists Eugene Debs and Victor Berger to form the Socialist Party of America in 1901.

At that time, both in the US and in Europe, socialists were the only political group to openly advocate women’s equality. In contrast to suffragists, socialists argued that gaining the vote was only the first step in creating an egalitarian society. But Theresa Serber almost immediately attacked the tendency of socialist men to say they favored gender equality, but to do nothing to bring it about, even within their own ranks. She formed separate women’s organizations to reach out to women workers and discuss their particular issues. She denounced the relegation of women in the Party to traditional women’s roles: women were “tired of their positions as official cake-bakers and money-collectors.” In 1909 she published an essay, “Where Do We Stand on the Woman Question?” criticizing her socialist “brothers” for their attitude toward female colleagues: “they discourage her activity and are utterly listless towards the outcome of her struggle.”

That year, Serber was elected to the new Women’s National Committee of the Socialist Party, and she promoted the idea of a “National Women’s Day” on February 28. In 1910, she published “The Diary of a Shirtwaist Worker”, a novel about the 3-month strike by about 20,000 mostly Jewish women factory workers in New York, the largest strike by women to that point in American history, which won better pay and shorter hours.

In 1910, German socialist women at the International Socialist Women's Conference in Copenhagen proposed creating an annual Women’s Day to promote equal rights. By 1914, March 8 was established as the day for demonstrations across Europe and America. The importance of this event grew when a women’s strike on March 8, 1917, in St. Petersburg began the Russian Revolution.

Women won the vote across Europe and America over the next few years: Russia 1917, Germany 1918, United States 1920, England 1928, although many individual American states had already given women the vote. Some nations moved slowly toward women’s suffrage: France and Italy only granted women voting rights in 1945.

But as socialist women had argued for decades, neither one celebratory day a year nor the right to vote brought equal rights. March 8 was declared a national holiday in many communist countries, but women continued to occupy secondary social, economic and political roles. Even after feminists in the US began in the 1960s to use the day to protest their continued subordinate status and the United Nations declared International Women’s Day in 1975, equality was still far away.

The socialist origins of a day devoted to women’s rights exemplifies the long-lasting political controversy over gender equality. The idea of equal rights was heretical for conservatives: a German poster calling for the vote for women on March 8, 1914, was banned by the Emperor’s government. Issues of equal rights continue to be marked by partisan political division in the US. The Lily Ledbetter Fair Pay Act was passed in 2009, supported by Democrats in the House 247-5 and in the Senate 56-0, and opposed by Republicans 172-3 in the House and 36-5 in the Senate. Democrats support the #MeToo movement and Republicans mock it. The Republican Party itself, as represented in Congress, is overwhelmingly male: 93% in the House and 85% in the Senate. Democrats are represented by a more equal, but not yet equal gender division: about 62-38 male in both chambers.

The same differences exist in Germany, but with more women overall. From left to right, the percentages of women delegates in the Bundestag, the federal legislature, are: Left 54%, Greens 58%, Social Democrats 43%, Free Democrats 24%, Christian Democrats 21%, and right-wing Alternative for Germany 11%.

A major point of discussion in German politics is the introduction of a gender quota system to insure equal representation in legislative assemblies. The Left Party proposed in November a law that would raise the proportion of women in the Bundestag, but it was voted down by a majority led by the Christian Democrats and Free Democrats. The far right Alternative for Germany was most vehemently against any effort to raise the proportion of women.

In the state of Brandenburg, ruled by a leftist coalition of Social Democrats, Greens and Left Party, the first German law requiring all parties to put forward equal numbers of men and women in their lists of candidates starting in 2020, the Parity Law, was passed this January.

The Social Democrats in Berlin proposed at the end of 2018 that March 8 should be a new holiday, and this was passed in January with the support of the Left and Greens. A coalition of activists used the March 8 holiday as a Kampftag, day of struggle, including a demonstration of about 10,000 people. Their demands included that abortion be fully legalized, pay be equalized, and more action be taken against sexism in daily life, especially violence against women.

International Women’s Day serves to highlight the remaining gender inequality in our society. The #MeToo movement exemplifies the much more vigorous public discussion of how to keep moving toward equality and the need for significant behavioral changes for both men and women to make that possible.

The goal is to make International Women’s Day superfluous.