Why Two Congresswomen, Generations Apart, Stood Alone Against the Tide of War 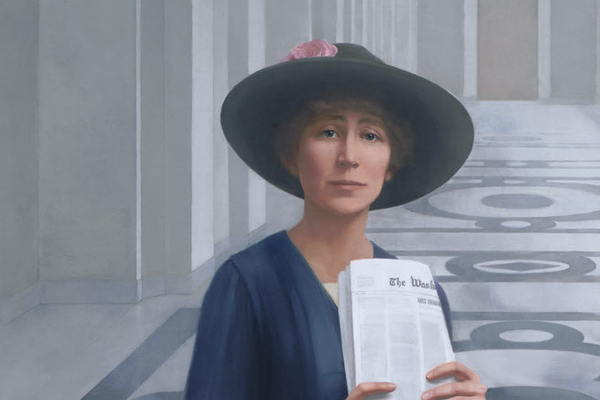 The first ever Congresswoman, Republican Jeannette Rankin of Montana (1917-1919, 1941-1943), had the courage to speak up and vote against both World War I and World War II, making her very distinctive in the history of the House of Representatives.

Nearly a century later, Democrat Barbara Lee of California (1998-Present) had the courage to speak up and vote against the authorization of the use of force after the September 11, 2001 attack on the World Trade Center and the Pentagon, which led to the war in Afghanistan against Osama bin Laden and Al Qaeda, and the Taliban government in that nation.

Both Rankin and Lee resisted the overwhelming tide of war in a moment of deep conscience and strong principle, and both should be regarded in American history as true pioneers of opposition to what they saw as the war machine.  A look at both of these courageous women’s evolution toward their principled stands is instructive of what is too seldom witnessed in American political history.

Jeannette Rankin (1880-1973) was the first woman to hold federal office in American history.  Born in Montana territory, she grew up on a family ranch, and graduated with a biology degree from the University of Montana in 1902.  She lived in San Francisco, New York City, and Seattle, entering the new field of social work, and becoming active in the women’s suffrage movement.  Becoming noticed for her activism, she ran a campaign for the US House of Representatives.  With her brother being an influential member of the Montana Republican Party, she campaigned all over rural areas, running as a backer of progressivism, emphasizing her suffrage work, social welfare, and liquor prohibition.

She became a national celebrity by becoming the first woman to serve in either house of Congress. Little more than a month after her two year term began, Rankin became one of 50 House members and 6 US Senators (including Robert LaFollette Sr. and George Norris, leaders of the progressive movement) to vote no on Woodrow Wilson’s call for war against Germany in World War I. She was more bitterly criticized than others, clearly because she was a woman working against the norm of male control of Congress.  She also pushed the adoption of what would become the 19th Amendment, after most individual states had adopted suffrage and women had contributed a great deal to the war effort.

Rankin left Congress after her two year term, taking her notoriety as a war opponent to work for progressive causes from outside the government. She supported the Sheppard-Towner Act of 1921, the first social welfare program for women and children and a forerunner of Social Security.  She also became a peace advocate, promoting pacifism and opposing FDR’s attempts to offer support to Great Britain against the growing threat of Nazi Germany in the late 1930s.  She testified before Congressional committees against preparedness measures, including fortification of the Guam territorial base in the Pacific as a protection against a potential threat from Imperial Japan.

Rankin was back in Congress in 1941 after campaigning for the seat she had left 22 years earlier.  And when Japan attacked Pearl Harbor on December 7, 1941, Rankin stood out as the only member of Congress to vote against the war resolution FDR offered the next day. Met with hisses from the House chamber, she was pursued by reporters, and took refuge in a phone booth until Capitol police arrived and took her to her office. There she was inundated by telegrams and angry phone calls, but she stood tall in her pacifist beliefs.  She later abstained in the vote on the war declaration on December 11 against Nazi Germany and Fascist Italy, but her loss of popularity made her give up the idea of running for reelection.  She never regretted her stand on war.

A generation later, however, pacifists, feminists, and civil rights advocates rallied around her symbolism as a woman of strength and principle, and Rankin led an antiwar march in January 1968 against Lyndon B. Johnson and the Vietnam War.  A statue of Rankin representing Montana is located in the National Statuary Hall in the US Capitol, and a replica is in the Montana state capital in Helena.  And she was inducted in the National Women’s Hall of Fame in 1993.

Barbara Lee (1946-  ), an African American, has served as a Democratic member of Congress from California since 1998 and is now in her 12th term and 24th year representing Oakland and the northern part of Alameda County in the San Francisco Bay area. Born in El Paso, Texas, Lee moved with her family to southern California as a teenager, had two children while still in her teens, and eventually found herself when she attended and graduated from Mills College in Oakland. Lee then gained a Masters in Social Work from the University of California, Berkeley.

Lee first became engaged in politics at Mills, working on Congresswoman Shirley Chisholm’s 1972 Presidential campaign and serving as a delegate to the Democratic National Convention that year. She was a California state legislator from 1990-1998, serving in the State Assembly for 6 years and in the State Senate for 2 years. She then replaced her mentor, Congressman Ron Dellums, for whom she had been a staff member before her state legislative service.  Lee won election easily, and has never had a difficult election campaign, as her district is the most Democratic in the state, and 4th most Democratic nationwide.

Lee made news by being willing to challenge American foreign policy consensus. Only three years into her Congressional service, she became an outlier when Al Qaeda attacked the World Trade Center and the Pentagon on September 11, 2001. In lieu of a declaration of war, President George W. Bush called for Congress to pass an “Authorization For Use Of Military Force Against Terrorists” (AUMF) on September 18. She stated that she believed the AUMF granted the President overly broad powers to wage war at a time when the facts regarding the situation were not yet clear.  She was concerned about an open-ended war with no exit strategy or focused target.

The reaction against Lee was massive, angry and hostile, and she was accused of being a “traitor” and a “communist”.  Conservative newspapers and editorials were highly critical. She got round-the-clock plainclothes police protection from the US Capitol Police after receiving death threats. Lee has voted consistently against military actions in Iraq, Afghanistan and Libya, and continued to seek repeal of the AUMF, passing an amendment to do so out of committee in 2017 and steering a bill for repeal through the full House in 2021. A generation after her first courageous actions, the Senate has not taken action to withdraw the AUMF.

Drone strikes and the detention of so-called enemy combatants at the US military base at Guantanamo Bay, Cuba, where terrorist suspects are being held indefinitely for a generation, without access to civilian courts has been, unfortunately, the outgrowth of national policy under three Presidents since George W. Bush.  Lee also has tried, unsuccessfully, to promote revocation of the War Powers Act of 1973.  She supported President Joe Biden’s decision to withdraw all troops from Afghanistan in August 2021.

Both Jeannette Rankin a century ago, and Barbara Lee in the 21st century are models of courage and determination, and expand the image of strong women willing to take a stand no matter what fierce opposition they engender.  They are a model for women in politics in the American future.