Alan Singer is a historian and Professor of Secondary Education at Hofstra University, author of "New York and Slavery: Time to Teach the Truth" (Albany, NY: SUNY Press, 2008), and editor of the New York and Slavery: Complicity and Resistance curriculum that received the 2005 National Council for the Social Studies program of excellence award. 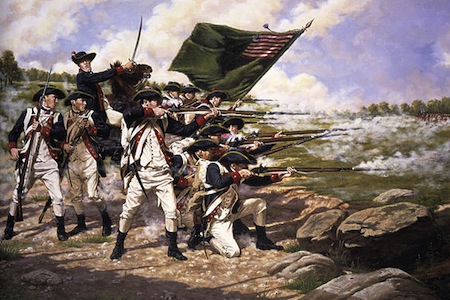 In the wake of the mass killing of schoolchildren in Newtown, Connecticut, there's been renewed national debate on gun control, especially placing restrictions on individual access to military-style weapons.

In January, New York State became the first state following the Newtown massacre to enact stricter gun regulations. The law put in place an immediate ban on semi-automatic rifles and pistols, shotguns, and other firearms with military-style features. It also requires universal background checks prior to the sale of all guns and ammunition, makes it easier for officials to confiscate firearms from the mentally ill, and increases penalties for gun-related crimes. President Obama has endorsed similar national legislation to curb “the epidemic of gun violence in this country” including universal background checks for all gun buyers, a crackdown on gun trafficking, a ban on military-style assault weapons, and a ban on ammunition magazines holding more than ten bullets.

Meanwhile the National Rifle Association has been busy leading a counter-assault. Wayne LaPierre, the executive director of the NRA accused President Obama of undermining Second Amendment constitutional principles, demonizing law-abiding gun owners, and trying to “every private personal firearms transaction right under the thumb of the federal government.” According to Mr. LaPierre, if Obama and gun control advocates get their way, only criminals will be able to have weapons and we will all be subject to tyranny.

The key issues I want to address in this article are the constitutional principles Mr. LaPierre is so intent on defending. I strongly support the interpretation of the United States Constitution presented by Associate Justice William Brennan. Speaking at Georgetown University in 1985, Justice Brennan argued that Supreme Court justices could only read and interpret the Constitution as contemporary or “twentieth-century Americans.” He rejected “original intent” theories and believed justices had to “look to the history of the time of framing and to the intervening history of interpretation.” Brennan felt “the ultimate question must be, what do the words of the text mean in our time? For the genius of the Constitution rests not in any static meaning it might have had in a world that is dead and gone, but in the adaptability of its great principles to cope with current problems and current needs.” Based on Brennan’s interpretation of constitutional principles, I suspect he would have no problem limiting access to dangerous semi-automatic weapons that the authors of the Constitution had no way of even envisioning.

In general I find most “textualist” arguments forwarded by the Supreme Court’s right-wing activist cabal (Antonin Scalia, Clarence Thomas, John Roberts, and Samuel Alito) to be self-justifying contorted attempts to discover constitutional support for positions they already hold. Justices Scalia and Thomas have attempted to skirt Brennan’s criticism of “original intent” by defining their position as a combination of, what they call, “textualist” and “originalist,” however, the difference, as far as I can see, is largely semantic. In a speech at the Catholic University of America in 1996, Scalia argued that “If you are a textualist, you don’t care about the intent, and I don’t care if the framers of the Constitution had some secret meaning in mind when they adopted its words. I take the words as they were promulgated to the people of the United States, and what is the fairly understood meaning of those words ... The words are the law.” Scalia rejects the idea of an “evolving” Constitution that recognizes “all sorts of rights that clearly did not exist at the time.”

However, when looking at the Second Amendment, I think it is useful, even fun, to play along with the textualists game and, to borrow from Shakespeare’s Hamlet, hoist them by their own petard.

An examination of the Constitution shows a very clear and precise distinction between the term “people” and “person” or “persons.” Clearly the authors of the text were aware of the distinction, but I have not found any academic references. I do not believe I am the first person to think of this and welcome being pointed in the right direction.

The authors of the Constitution use the individual term “person” or “persons” twenty-two times in the original document but the collective term “people” only twice, in the Preamble and in Article I Section 1. The Preamble begins “We the People of the United States.” This country is not established by individual states nor is established by individual persons. It is a nation established by a collective “People.” According to Article I Section 1, the collective “People” of each state chose members of the House of Representatives, but individual participation or membership in this People is not defined or discussed and the rights of individual persons can legally be limited. In the early years of the Republic states placed residential, citizenship, religious, property-holding, racial, gender, and age qualifications on voting by individual “persons.” Constitutional amendments had to be passed to grant the right to vote to blacks, women, and eighteen-year-olds and to outlaw poll taxes. My eight-year-old grandchildren still cannot vote and probably should not.

In this textualist view, the right of the “people” is a general statement of principle, not a specific or individual right. This distinction can be seen in the Fourth Amendment where the collective right of the people “to be secure in their [individual] persons, houses, papers, and effects, against unreasonable searches and seizures, shall not be violated, and no Warrants shall issue, but upon probable cause, supported by Oath or affirmation, and particularly describing the place to be searched, and the [individual] persons or things to be seized.”

The importance of individual rights for persons is made explicit in the Fifth Amendment. “No person [emphasis added] shall be held to answer for a capital, or otherwise infamous crime, unless on a presentment or indictment of a Grand Jury, except in cases arising in the land or naval forces, or in the Militia, when in actual service in time of War or public danger; nor shall any person [emphasis added] be subject for the same offence to be twice put in jeopardy of life or limb; nor shall be compelled in any criminal case to be a witness against himself, nor be deprived of life, liberty, or property, without due process of law; nor shall private property be taken for public use, without just compensation.”

You could argue that a textualist justice could use this distinction to affect the First Amendment rights of individuals. The First Amendment places limits on Congress that were extending to the states by the Fourteenth Amendment. It states “Congress shall make no law respecting an establishment of religion, or prohibiting the free exercise thereof; or abridging the freedom of speech, or of the press; or the right of the people peaceably to assemble, and to petition the Government for a redress of grievances.” The general reference to the collective “people” is used as a modifier only on the right to peaceably assemble and petition and conceivably Congress or by extension the states, could somehow limit the right of certain individuals, to assemble or petition, but at this juncture that is unlikely, at least I hope.

In this textualist view the Second Amendment, which states: ”A well regulated Militia, being necessary to the security of a free State, the right of the people to keep and bear Arms, shall not be infringed,” is clearly referring to the collective “people,” whether you buy the idea they must be related to a militia or not. The collective nation has a right to defend itself. However, there is no specific prohibition on limiting the access of individual “persons” to dangerous weapons. Gun control is a political decision left to elected officials, not a constitutional principle.