Senator Cruz, You're No James Madison

John Willingham is a regular contributor to the History News Network. He has an M.A. in American social/intellectual history from the University of Texas at Austin. 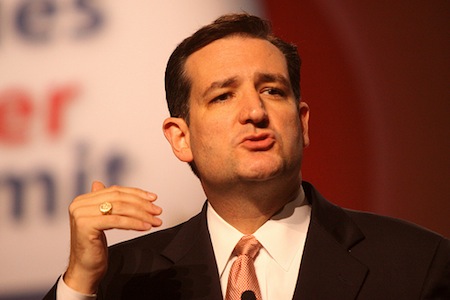 More than twenty years ago, by way of linking his work to the ideas of James Madison, Ted Cruz titled his senior thesis at Princeton “Clipping the Wings of Angels,” derived from a famous quote in Madison’s Federalist No. 51:

Cruz’s 118-page thesis is interesting in part because it shows how little difference there is between the young Princetonian of 1992 and the Tea Party darling of 2013. And, on its surface, the thesis might be taken to confirm an affinity between the newly-elected senator from Texas and the man who has been called the “midwife” of the Constitution.

The full title of the thesis is “Clipping the Wings of Angels: The History and Theory Behind the Ninth and Tenth Amendments to the United States Constitution.” Cruz has continued to use part of the title in recent comments, such as this op-ed arguing for a reinvigorated Tenth Amendment. But it is in his specific analyses of these amendments that Cruz shows how far he really is from the James Madison that historians describe, especially when Cruz tries to make Madison a champion of states’ rights.

Neither amendment is lengthy. The Ninth: “The enumeration in the Constitution, of certain rights, shall not be construed to deny or disparage others retained by the people.”

The Tenth: “The powers not delegated to the United States by the Constitution, nor prohibited by it to the States, are reserved to the States respectively, or to the people.”

Both Bernard Bailyn and his former student, Jack Rakove, a professor at Stanford and an eminent Madison scholar, have argued that Madison and most of the Founders believed that the Bill of Rights was not an exhaustive list of rights, not for their own time and certainly not for all time. Madison was especially concerned that the listing of rights could be taken to mean that other rights not listed would be denied or unprotected as a result of their exclusion.

“Accordingly,” Rakove has written, “for Madison the language of the Ninth Amendment expressed a vital principle” that unlisted and even unanticipated fundamental rights must nevertheless be eligible for Constitutional protection, though the Constitution did not specify criteria for determining such rights.

Madison was long opposed to a bill of rights because of his concerns about the fate of unlisted rights, but after a lengthy correspondence with Thomas Jefferson, who was minister to France at the time, and after being challenged for a place in the new Congress by James Monroe, an ardent supporter of a separate bill of rights, Madison decided that a bill of rights was necessary, if for no other reason than to incorporate the wishes of Antifederalists who were against ratification of the Constitution without a bill of rights.

Thus it came to be that Madison rather quickly drafted and proposed his own list of rights for the Congress, hoping to avoid delays or challenges that would force a second Constitutional Convention that would likely lead to a gutted version that restored state primacy. It was unthinkable to Madison for the nation to revert to state dominance. In fact, he had seen an earlier and very dear proposal of his own to subject all state laws to Congressional veto fail in the early days of the Constitutional Convention.

As Rakove and many other scholars have emphasized, Madison saw the states as a major impediment to the protection of minority rights because their sometimes “vicious” legislation too often reflected the influence of self-interested majorities within the relatively small jurisdictions of most states. After all, it was the self-serving and obstinate ways of the states under the Articles of Confederation that created the need for a new national Constitution.

Madison’s cure: give sufficient authority to the national government so that its much larger and more diverse majorities would be less vulnerable to foolish or parochial control. While Madison recognized that government on any scale was capable of abusing authority, he also thought that most if not all the mischief that might come from the national government could be limited by the separation of powers in the Constitution.

Madison’s inelegant draft of an amendment that included parts of what came to be the Ninth and Tenth Amendments became the basis in Cruz’s thesis for an argument that Madison viewed “the [unenumerated] rights retained by the people” (later, the Ninth Amendment) as actually their rights against the “illegitimate means” of the national government in carrying out its powers.

Therefore, Cruz would have Madison targeting the elastic clause by penning the Ninth Amendment, even though Madison wrote in Federalist No. 44 that the Constitution would be a “dead letter” without the clause. The actual Ninth Amendment text simply addresses the concern that the Bill of Rights itself does not exclude other rights.

And this brings us to the Tenth Amendment. In his thesis, Cruz is critical of the ruling in the 1976 National League of Cities v. Usery case, decided by the Burger court and generally viewed as a conservative ruling. Usery sought to balance federal and state interests with respect to the Fair Labor Standards Act. Cruz conceded that “the Court thought it was being true to the spirit of the [Tenth] Amendment…if tight requirements are met.” But by the mere consideration of the issue as something less than an absolute line between state and federal power, the Court had “already lost the idea of enumerated powers.”

Madison himself strongly opposed the insertion of “expressly” into the text of the Tenth Amendment “because it was impossible to confine a Government to the exercise of express powers; there must necessarily be powers by implication, unless the Constitution descended to recount every minutia.”

Richard Brookhiser, an editor at the conservative National Review, is the author of a recent, insightful biography of the fourth president. Brookhiser captures the essence of Madison’s thought on the Constitution with this observation: “Extending the sphere was a remedy [for Madison] that applied to the government as well as the nation.”

What Brookhiser means is that when Madison helped bring about an extended government “sphere” that included the separation of powers as well as a bill of rights, and an extended national sphere that overcame the pernicious influence of state majorities, he did so believing that only such a delicate balancing act could serve both an effective national government and the individual rights of its people, whether enumerated or not.

These views are neither static nor deferential to the states. Recall that in the quote Cruz is so fond of using, Madison wrote that “you must first enable the government to control the governed; and in the next place oblige it to control itself.” [Emphasis added.]  Cruz emphasizes the second part virtually to the exclusion of the first.

No one can deny to Ted Cruz his own right to maintain a static and narrow view of the Constitution of the United States. He has made it literally his life’s work to champion his radically conservative position on the restricted role of the federal government and the relative importance of the states, and he is a man of undoubted ability. His recent actions are designed to draw attention to himself and eventually to his arguments, and he appears to be confident that he is the person who can, with enough attention, prevail. But in attempting to do so, he should respect James Madison for who he really was.