Yvonne Sherratt is a researcher at Oxford University. Her latest book is "Hitler's Philosophers." 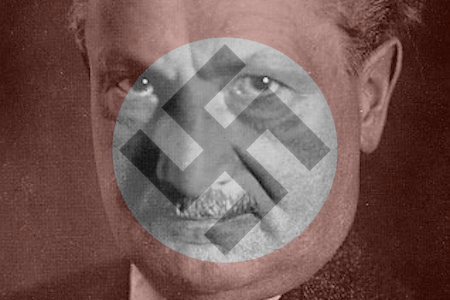 With today's heated rhetoric against the study of history and philosophy, it's worth reminding our readers that philosophy matters, and -- tragically -- one of the ways it matters is how it can be twisted into support for atrocities.

The old gods have been diminished in their power, the gods of the ancient world are all but forgotten, Christianity in the Western world struggles to maintain its congregations and the new, allegedly modern, forward-looking world is all about what seems to be a new god, "the economy." We hear phrases like "for the good of the economy" or, "it would benefit the economy." The "good of the economy" is supposed to be an explanation for all decisions, the essence of all motivations. Yet, let us pause for a moment and think exactly, what is the economy, and what is its role in our lives.

It was the ancient Greek thinker Socrates who first encouraged us to think rather than accept at face value the opinions of others, however popular or authoritative they are. Following Socrates, we should therefore ask: who, or rather what is the economy? Why should we support it? The response given by those dedicated to "the economy" seems to be that the answer to these questions is self-evident. However, if we push them just a little bit to explain further, they might come up with something like, "the economy is the vehicle by means of which we all gain employment." Now nobody in their right mind would argue with the importance of employment. We all need jobs. But then in arguing that the economy serves employment (not the other way round) the key issue becomes employment, not the economy per se. For instance, we could, in theory, have economic growth without the creation of jobs, in which case the economy would not serve its goal, job creation. So the economy is not necessarily our main goal. It is the means to another goal, namely employment. This is something we undoubtedly all seek. So from worshipping the economy, we could move to say that we are, in fact, as a modern people, pursuing employment.

After Socrates, Plato and Aristotle continued the classical tradition of thought and they, like Socrates, asked questions. They took these questions further, not just about thinking through supposedly self-evident `truths’ but they asked questions about the purpose of human life. From what we have deduced so far, that purpose seems not be to serve "the economy" but for the economy to provide employment. If employment then were the goal of human life, and the economy successfully supplied us with employment, we should then have fulfilled our purpose and be contented. However, is it enough merely to be employed or does the nature of that employment matter? Are we content to simply work at anything, however dull, difficult or unpleasant it might be, or do we want to spend our working lives doing something we consider satisfying, stimulating and important? If the answer is the latter, we want fulfilling jobs, then our goal is now no longer doing something for the good of the economy, or even to be employed, but to be fulfilled in our work.

This, of course, leads us to ask a further question, about what the nature of fulfilment might be. Plato believed that we could only be fulfilled if we pursued what he believed to be our "natural purpose," so that if we were clever, it was central that we exercise and use our minds. Aristotle argued that health, wealth, pleasure and authority were important too, alongside intellectual development and stimulation. These arguments from the ancient world may well echo with us. Intellectual fulfilment or mental stimulation figure highly in almost all accounts of human happiness and fulfilment delivered over the centuries. The disciplines of history and philosophy have grown to satisfy that need. History and philosophy have been hewn over generations to fulfil the human craving for knowledge and understanding, for mental development and stimulation.

However, now at the supposed apex of the modern world, arguments are afoot that challenge the very existence of these desciplines. History and philosophy are being threatened by the claim that they are irrelevant or unnecessary to economic activity. The new god of "the economy" does not have a place for them, it is often said. Yet, by using our minds, by thinking through issues of priority, we can arrive at a structure which places thought as sovereign, one of the key purposes of human life and the economy, through delivering employment as the means to achieve that end. Thought, history, and philosophy are the aim, the economy, simply the tool to serve that aim.

There are those who might brush aside such arguments, those who believe that history and philosophy, the disciplines which develop the human mind, are simply the servant of economic factors, and that, unless they can prove their credentials in strictly financial terms -- which they believe these disciplines cannot -- ought to be obliterated. Perhaps we can try to follow through the logic of this position. First of all, what is history? History, is obviously the study of our past, our ancestors’ lives, the way people lived, what they learned, the events that they experienced. It tells us how we have come to live in the buildings we do, walk the particular arrangement of streets that we see every day, speak a distinct language, wear particular clothes. History can illuminate why our calendar is organized the way it is, how we experience time, why we have even come to believe that certain things matter and other do not, for instance, why we think the economy is of such central importance. All these things have been handed down to us by previous generations, by the Romans, the Anglo-Saxons, the migration of these European influences to the New World, by American independence and the subsequent development of modern Western culture. Losing history would mean that we would lose all these things, a sense of who we are, where we come from and why we are as we are. Losing philosophy would mean that we would lose the skill, hewn over generations, to think.

Philosophy also encompasses ethics and politics. How would presidential speeches about democracy, the comparison of right or wrong have any significance in a world which didn’t value thought or the past?

Philosophy has always faced challenges. In Nazi Germany, Hitler attempted to usurp ideas from his nation’s heritage and claim that racism, war, and dictatorship were good qualities -- indeed, the very foundations of the German nation. He took Germany’s greatest thinkers -- Immanuel Kant, Georg Wilhelm Hegel and Friederich Nietzsche -- and presented them as anti-Semitic. In so doing he attempted to legitimise hostility towards the Jews. Hitler also uncovered strands of militaristic writing which the Nazis used to value war over peace. And through their own interpretations of Charles Darwin’s works, the Nazis attempted to legitimize a sinister variant of eugenics: sterilizing the sick, the weak, the disabled and those they characterised as coming from the lower races. This was, of course, merely a step away, from legitimizing genocide.

Just as the Nazis created a phoney philosophy, so too they created a mythic history. Corrupting scholars, they invented an ideal of the Norse berserkers, Teutonic knights and folkloric culture -- that is they invented a "pure," Aryan past with no place for the Jews or other races. In turn, they distorted the Jewish past, presented as false history of what they referred to as "Asiatic peoples." How could Jewish, or indeed, other peoples fight back without a knowledge of their actual past?

The Nazis replaced democratic values with totalitarian ones, freedom with military oppression, civil rights with racial discrimination and eventual genocide. How would obliterating historical and philosophical understanding allow people to fight back and see that Nazism was an abomination? How would it allow them to rebuild democracy after Hitler’s defeat at the end of the Second World War?

The economy is undoubtedly connected with physical survival, with the possibilities of affluence and the possibilities of employment, and no one disputes the relevance of any of these. However, "the economy" does not provide us, as people, with answers to questions about how we should live our lives. It does not give us a platform to prioritize matters of importance. The economy does not help us to choose between a fulfilling or a boring life, between constructive or destructive work, or to choose between good and evil. For these, the aims and purpose of human life, we need history and we need philosophy. These subjects matter. And tragically, if ordinary people don’t have them, they are not simply at the mercy of living boring or unfulfilling lives, but are at the mercy of unscrupulous leaders who could use them, as the Nazis did, to impose an evil regime. And no amount of economic growth can protect ordinary people from these corruptions of the mind. It is not just a strong economy, but also a strong mind that is necessary to lead a fulfilling life, and moreover, to provide a defence against threats to democratic values.