Yes, Paula Deen is a Racist. But It's Not Like She Repealed the Voting Rights Act.

Carole Emberton teaches history at the University at Buffalo (SUNY). Her first book, "Beyond Redemption: Race, Violence, and the American South after the Civil War" was published by the University of Chicago Press in June. 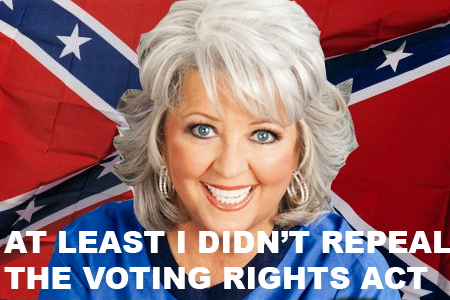 UPDATE 2:58 PM: So much for wishful thinking. I concluded my initial piece with the thought that maybe the Supreme Court might see the Paula Deen debacle as a reason to uphold the requirement that states with a history of voting discrimination receive “preclearance” from the Department of Justice before adopting any new legislation affecting elections laws, a provision of the Voting Rights Act. The “covered jurisdictions” include seven former Confederate states: Alabama, Georgia, Louisiana, Mississippi, South Carolina, Texas, and Virginia, as well as several counties in Florida and North Carolina. (Alaska and Arizona are also included). Unfortunately, this morning the court gutted that requirement in Shelby County v. Holder by ruling that Section 4a, which sets out the “coverage formula” that is used to determine which state and local governments must comply with Section 5’s preapproval requirement, is no longer constitutional. First passed in 1965 and extended several times over the past five decades, Sect. 5 has withstood numerous challenges in that time, but today’s decision, while leaving it nominally in tact, effectively strips the federal government of its power of enforcement in those areas with a history of using a variety of means to restrict voting among racial minorities. In 1965, these means included literacy tests and poll taxes, which in many areas limited poor white voters as much as they did black ones. Nevertheless, voting restrictions were a hallmark of Jim Crow.

But all that is history, says Chief Justice John Roberts. In the majority opinion, justices Scalia, Kennedy, Thomas, and Alito, joined Roberts in declaring that Sect. 4a is, simply put, past its sell-by date. Echoing the logic used by the Beaumont school board member I quoted earlier, Roberts writes,

Nearly 50 years later, things have changed dramatically. Largely because of the Voting Rights Act, ‘v]oter turnout and registration rates’ in covered jurisdictions ‘now approach parity. Blatantly discriminatory evasions of federal decrees are rare. And minority candidates hold office at unprecedented levels.’ Northwest Austin, supra, at 202. The tests and devices that blocked ballot access have been forbidden nationwide for over 40 years. Yet the Act has not eased [Sect. 5’s] restrictions or narrowed the scope of [Sect. 4’s] coverage formula along the way. Instead those extraordinary and unprecedented features have been reauthorized as if nothing has changed, and they have grown even stronger.

Yet, as Colorlines points out, those states once targeted for “pre-clearance” are currently in the process of enacting new voting requirements that would unfairly burden poor and minority populations, including photo ID cards, the elimination of early voting, proof-of-citizenship, and some of the strictest felony disfranchisement laws in the country. As a result, no African American except for Virginia Governor Doug Wilder, elected in 1989, has held statewide office in Mississippi, Alabama, North Carolina, or Virginia. But the real effect of these laws is felt at the local level where “all of the kitchen-table issues that affect our lives most tangibly” are decided.

It was those “kitchen-table issues” that lay at the heart of the disfranchisement push of the 1880s and 90s. By that time, the South may have been “redeemed” by Democrats at the level of national politics; the election of 1876 saw to that. Although federal troops were removed in exchange for southern Democrats support of Hayes’s presidency, all was not lost. Pockets of local black/Republican resistance, some of them quite sizeable, continued throughout the South, resulting in Republican and/or black county magistrates, sheriffs, tax collectors, and state legislators. Futhermore, the potential for Populist alliances among rural whites and blacks posed a significant threat to white planter dominance in the South. Disfranchisement represented a calculated, determined effort to nip the bud of biracial democracy once and for all. The “Solid South” came about one town, one county, one state at a time. At the time, in any particular locale, it may not have appeared as insidious as it does to us today, which makes Justice Roberts’s contention that that the “tests and devices” targeted for elimination by the Voting Rights Act do not approach the alarming levels of the past. The voter ID cards of 2014 may well become the poll tax of 1914.

But the allure of the narrative Chief Justice Roberts endeavors to tell in his opinion makes it difficult to accept the effects of the past on the present. The message of racial redemption that flows through his words has been repeated and reformulated many times in the last 150 years since the slavery came to its official end. Many aspects of Radical Reconstruction, in particular the Thirteenth, Fourteenth, and Fifteenth amendments, were intended to atone for the political sin of slavery. Likewise, elements of the “Second Reconstruction” in the 1960s, including the Voting Rights Act, were understood as carving out that “stone of hope” that Martin Luther King envisioned. More recently, as the murderers of Medgar Evers and other Civil Rights workers finally have been brought to justice, the power of the South’s redemptive story has grown. Perhaps its climatic chapter was written in November 2008 with the election of an African American to the nation’s highest office. Yet we should be careful not to fall under redemption’s spell no matter how badly we might want to.

For the past few days, there has been much ado about Paula Deen's use of a certain racial epithet. It's not much ado about nothing, however, as many of her defenders would like to us believe. This incident, along with a seemingly unrelated case now before the Supreme Court, challenge our understandings of what history is and what it means for the nation's political life.

Both Deen and her defenders plead her case by arguing that she is old and southern and therefore cannot help using such language. Her great-grandfather owned slaves. She grew up under Jim Crow. "She's just from another time," concluded one patron of her popular restaurant. Perhaps it is ironic that the patron was of the race that bears the stigma of the racial epithet that the chef admitted using. Perhaps not. For both Deen and her unlikely defender, the past is like a well-worn apron stained with remnants of old messes that she wears not because it is comfortable and useful but because the knot that holds it to her body cannot be undone.

At the same time, critics of a black-majority school board in Beaumont, Texas, have used an arcane municipal statute to disqualify three of the school board members and redraw the city's election line to favor white candidates. The Department of Justice (DOJ) nullifies these measures under Section 5 of the 1965 Voting Rights Act, which requires states with a history of racial discrimination to receive pre-authorization from the federal government before passing any new election laws. The critics challenge the DOJ's ruling, saying that these provisions are no longer needed, that the South has overcome the ghosts of slavery and Jim Crow. They say they are fighting against malfeasance and mismanagement -- the same arguments made against black officeholders during Reconstruction in the 1860s and 70s and lead to disfranchisement in the 1880s and 90s -- not race. They say everyone needs to move on. "There is a part of this community that never forgets, no matter how much progress is made,” said one white school board member. "What we hear about is how things used to be.” For him, the past has no bearing on the present. He has untied the knot.

[Editor's Note: The Supreme Court has just struck down Section 4 of the Voting Rights Act as unconstitutional. It is unclear what this will mean for the Beaumont case.]

If I were to use these two case studies as writing prompts in any of my undergraduate history courses, I might ask the students to discuss the divergent views of history and its meaning for the present expressed by the actors in each. They would probably find this exercise difficult since many college students have imbibed trite phrases to express their understanding of the relationship between past and present: "we study history so we can understand who we are" or "we study history so that we can learn from past mistakes." In some ways though, these simple catch-phrases embody the two cases perfectly. In the first instance, history defines us, both individually and collectively, imprinting our social and psychological make up with its indelible mark. In the second, we remake history, taking from it what we need to become better, but it need not define us. In the latter view, redemption is easy; in the former, it is much more difficult.

These two cases provide more than an academic exercise for budding history majors, however. There is much at stake in both. Deen's vulgarity emerged as part of an on-going workplace discrimination case in which she is charged with creating a hostile environment for a former female employee. The Beaumont school board's challenge to the DOJ's requirement has made it all the way to the Supreme Court, which will decide this week whether or not the past is finally past. Both cases reveal with wider ramifications of history and our understandings of it in our current lives. For if the Supreme Court justices, who are hardly immune to the blogosphere or cable news, accept the chef's view of history, might they reject the school board member's and uphold measures aimed at rectifying the failures of the first Reconstruction?

I cringe at Deen's language and scoff at the implied notions that hers is a problem only of poor word choice, and that such language is typical of southerners of a certain generation. I have now lived "up North" longer that I ever did in the South, the land of my birth, and I have heard the word used as much if not more in Chicago and Buffalo than I ever did "down there." I am saddened but not surprised that this case probably allows of Northerners to feel self-righteous and ignore the institutionalized racism that lives much closer to home than they'd ever admit. Yet at the same time, I find her vision of the history of race in America much more useful and realistic than the feel-good one told by the school board member. I realize that Deen wishes to deny her responsibility and thereby be absolved from the bad publicity she is getting as well as the millions of dollars she may have to pay out should she lose the lawsuit; however, if at least five justices see in her the ever-corrupting influence of historical racism and uphold the DOJ's restrictions, then she will have done the nation an important albeit unintentional service.