Europe's Post-Cold War Order is Under Threat ... and Not Just from Russia

Dan Stone is Professor of Modern History at Royal Holloway, University of London. He is a historian of ideas who has written or edited fourteen books on subjects including the Holocaust, genocide, fascism and eugenics, including (as editor) the The Oxford Handbook of Postwar European History (2012). He is the author of Goodbye to All That? The Story of Europe Since 1945. 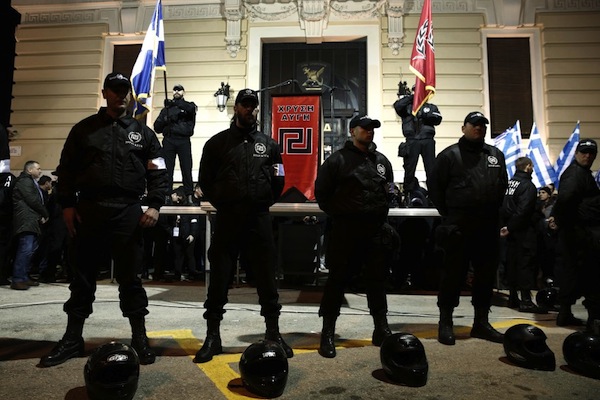 A version of this piece was originally published on the OUP blog.

On New Year’s Day, 2014, Latvia joined the Eurozone and Romanians and Bulgarians became free to travel and settle in most of the European Union. Twenty years ago these statements would have sounded like fantasy; the EU has reshaped Europe so that the divisions of the Cold War now seem like a bad dream. Yet the sense of wonder that such facts engender is tempered by the realization that most people in Latvia do not want to join the euro and that most Europeans -- at least, if their political leaders and tabloid press are to be believed -- do not support the free movement of peoples. What has happened to make the aspirations of the EEC’s founding fathers like Monnet, Schuman and Spinelli seem so unattractive to today’s Europeans?

A clue can be found in the ways in which European “collective memory” of World War II has changed. Just a few months ago, in November 2013, a statue to Admiral Miklós Horthy, Hungary’s wartime leader, was unveiled in Szabadság Tér (Freedom Place) in central Budapest. Horthy was one of Hitler’s closest allies, under whose rule some 440,000 Jews were deported and murdered in Auschwitz. In Greece, the openly Nazi Golden Dawn has become the country’s third-largest political party, quite a phenomenon in a country which suffered tremendously during the Nazi occupation and in which anti-German sentiment is currently high. In Russia, the media manipulates popular opinion by claiming that the occupation of Crimea is a necessary defence of ethnic Russians against Ukrainian fascism. And although there are some fascists in the new government in Kiev, Vladimir Putin’s appeal to the past to justify naked aggression is a gross distortion of the meaning of what Russians call the Great Patriotic War. In Western Europe, Marine Le Pen of France’s National Front and Geert Wilders of the Freedom Party in the Netherlands are joining forces with the Vlaams Belang in Belgian Flanders and the Sweden Democrats in order, they say, to “liberate Europe from the monster of Brussels.” Regularly referred to as “populists”, these are in fact mostly parties with a fascist heritage. Despite that, it is widely expected that they -- along with the U.K. Independence Party (UKIP) and other similar movements elsewhere -- will provide an electoral shock in the European elections this coming May. Across Europe, attacking Roma, Muslims, immigrants and the poor rather than tackling complex structural issues such as stimulating demand or addressing climate change brings short-term political success.

It is perhaps unsurprising that five years of austerity has given rise to a new wave of rejectionist, “anti-system” movements. What is harder to explain is why it should be that most of these movements (with exceptions such as Syriza in Greece and the hard-to-pin-down Five Star Movement in Italy) are on the right, when the conditions to which they are responding are widely ascribed to the failures of an under-regulated banking system which benefited only the rich. Something deep in Europe’s unconscious has been awakened so that although the problems are current ones, the nature of the response to them builds on a well-established template.

After World War II, antifascism became the order of the day. In Eastern Europe, the communists used the rhetoric of antifascism as a legitimizing strategy: the defeat of the Third Reich apparently justified the brutal reshaping of society to eliminate traditional elites and ownership of land and property. Yet there always remained pride in the victory over fascism and even those who became disenchanted with the increasingly venal and morally and economically bankrupt communist regimes would say that they had initially embraced communism because of that founding achievement. In Western Europe, the “welfare capitalism” that emerged in the 1950s was a kind of recognition of the shared suffering that all classes had endured in the process of defeating Hitler. Anticommunism was a crucial component of the Western European postwar experience but it went hand in hand with a kind of antifascism. This Western antifascism was filtered through the “lessons of Munich” and half-truths about the liberation of resisting nations from the Nazi occupier (which brushed aside awkward questions about local collaboration or the pan-European appeal of Nazi racial hegemony). But the notion of “totalitarianism” which became popular in the 1950s suggested that the surest way to condemn the evils of communism was to understand them as similar to those of Nazism. Since the recessions of the 1970s, and especially since the end of the Cold War, however, these differently-inflected antifascist consensuses have been dismantled.

They have been dismantled first and foremost on an economic front. The market has been introduced into state-run industries and services; the provision of welfare has been cut and its recipients demonized; the economies of Europe, with the notable exception of Germany, have become service-sector driven. But alongside this familiar picture of the neoliberal recovery from the recessions of the 1970s and the challenges it faces today, another face of the postwar antifascist consensus also came under fire. Postwar prosperity was built on the economic boom and, hand in hand with it, the propagation of nation-building myths that “everyone” had been in the resistance or that there was no local support for Nazism -- in France, Italy, Denmark, Norway or elsewhere. This was of course humbug but at least it was directed against Nazism.

Since the 1970s there has occurred a steady revision of the past. This has had the positive result of exposing shams such as that there were no local collaborators in France or that Austria was, as the official line had it, the “first victim of National Socialism.” But at the same time as shattering these myths, groups which identified themselves as the “losers” of World War II began slowly to make their views heard again. In the context of decolonization, especially the vicious Algerian War (1954-62) and later in the context of the collapse of communism, when any “progressive” politics on the spectrum from liberalism to social democracy was discredited by association with communism, voices of the marginalized extreme right re-entered the political fray. By the twenty-first century, ideas which had been considered at best dead and at worst lunatic were once again winning votes in Europe, if not exactly respectability. It is clear that the French National Front, for example, is the heir to the Poujadist anti-system populism of the 1950s and to the resentment of the pieds noirs (the white French community in Algeria), most of whom fled for mainland France in 1962, as well as the older Vichyite, anti-republican tradition.

Since the 1950s, “Europe” has been built on a dream of a continent in which war is banished and in which economic prosperity is shared by all. It has not always worked out like that and current anti-European sentiment justifiably attacks a seemingly distant technocracy which inflicts economic pain on ordinary citizens. But justifiable objections are being channelled in directions which are distinctly dangerous and which, if they are not curbed, have the potential not just to reverse EU policy but to break up the EU altogether and to reinstate a social Darwinist Europe of nationalist competition, a race to the bottom of protectionism, anti-immigrant rhetoric and local racism. The postwar order was built on values loosely associated with antifascism. Today’s danger is that a rejection of the EU brings in its train the values of “anti-antifascism.” A discussion of what the EU is for and what sort of integration we want is relevant and necessary at all times. But at present we are at risk of forgetting the catastrophe that called European integration into being in the first place.