The Two Vice Presidents Who Got Along Best with Their Presidents 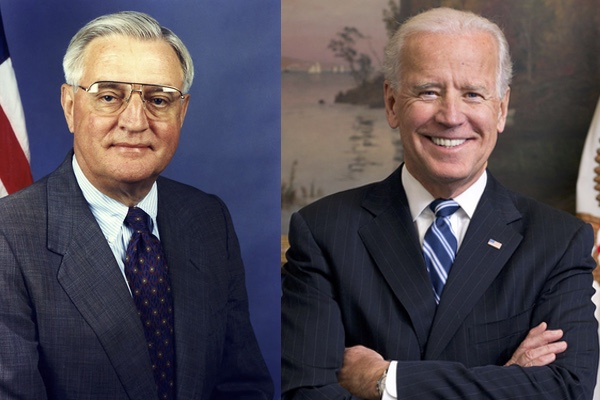 Now that President Barack Obama and Vice President Joe Biden have completed their eight years in office one can reflect on the extremely close relationship between the two men over the past eight years, what many call a “bromance.” And one can also reflect that 4 decades ago, we had a similar, extremely close and engaged team of President Jimmy Carter and Vice President Walter Mondale; and both survive today, 36 years after they left office, an all time record.

Both Presidents Carter and Obama recognized the importance of a close association with Vice Presidents Mondale and Biden respectively, and the open and warm personalities of the four men involved allowed a familiarity and a genuine alliance that was not matched by any other Presidential-Vice Presidential teams in American history. To expect two men who wished to be President to put aside their egos and cooperate and become as close as two people in any position of authority can become, and have a sincere, long term friendship, is indeed amazing. The Presidents involved had to be willing to share decision making at an unprecedented level, and both Jimmy Carter and Barack Obama will be long hailed in history for having made the Vice Presidency become the powerful office it has become.

The level of closeness and engagement that Carter and Mondale had was not repeated by Ronald Reagan and George H. W. Bush; Bush and Dan Quayle; Bill Clinton and Al Gore; and George W. Bush and Dick Cheney. While the first Bush, Gore and Cheney certainly were crucial in policy making, and were cooperative with the Presidents they served, each of them was unable to gain the personal confidence and closeness in family relationships of the Carter-Mondale and Obama-Biden partnerships.

Neither Jimmy Carter nor Barack Obama had much familiarity with Mondale and Biden, respectively, before they chose them as their Vice Presidential running mates. Carter had never been in Washington DC, and hardly knew Mondale when he met him for a job interview, but was aware that Mondale had briefly been a Presidential candidate before dropping out, while Obama had been a colleague of Biden for about two years when he announced for President in 2007, and they became Presidential candidate rivals.

Both Carter and Obama knew that Mondale and Biden had great reputations in the US Senate, and had great DC connections and lots of experience and knowledge, more than either Presidential nominee had been able to gain. Both saw that their running mates were congenial and cooperative types, and both Carter and Obama made clear, right at the beginning, that they would listen to the Vice President, with them being allowed to see and communicate with the President privately on a regular basis, and would be “in the loop” when crucial decisions were made.

It was often said that Walter Mondale acted almost as a “Co-President” in a manner never seen earlier, and only truly matched since with Joe Biden. Mondale was given an office in the White House, and had weekly lunches with Carter, and he was a Presidential Advisor, full time participant, and trouble shooter. No tensions were ever reported between Mondale and Carter, in public print or gossip. The sincerity of Mondale and Carter toward each other has continued for three and a half decades; when Mondale was honored for his contributions to the Vice Presidency at a gathering in Washington, DC on October 20, 2015, Carter was there to salute him, as well as Biden. The two Vice Presidents had the opportunity to discuss the evolution of the Vice Presidency over the past four decades.

One can be assured, as said at the White House honoring of Joe Biden with the Presidential Medal of Freedom “With Distinction” on January 12, 2017, that the Obama and Biden families are linked for life, and that their close association will continue. Biden served for eight years as the chief behind the scenes counselor. His close association with former Senate colleagues of both parties enabled him to became the major emissary to Senate Republican leader Mitch McConnell, and House Speakers John Boehner and Paul Ryan. Even Republicans who never agreed with Biden’s views always found him someone they admired and could negotiate with.

Biden, the former Chairman of the Senate Foreign Relations Committee, often played a contrarian role in foreign policy. But he was always fully loyal once the debate and discussions were over, and a decision had been taken. Biden took the lead on promoting gay rights, the protection of women against violence, gun control legislation after the Sandy Hook Elementary School Massacre, and the war on cancer after his son Beau Biden died of the disease in 2015. Everyone knew where Joe Biden stood, as he wore his heart on his sleeve on a regular basis, and the close friendship between Obama and Biden is a very special one which will endure.

Mondale was there when Jimmy Carter had to make tough decisions during the Iran Hostage Crisis, the Israeli-Egyptian peace treaty, the Panama Canal treaty, the energy crisis, and the reorganization of health and education into separate departments. Biden was there backing up Obama on the Affordable Care Act, advancements on the environment, prison reform, promotion of women’s rights, immigration reform, gun control, and the decision to eliminate Al Qaeda leader Osama bin Laden in 2011. Biden actually prompted Obama to take a firm position on gay rights and gay marriage before Obama was planning to do so.

Both Mondale and Biden spoke truth to power, demonstrating their genuine, sincere, and committed connections to their Presidents and the causes they believed in. Both are the shining lights of the office of the Vice Presidency. It will not be easy to find another Vice President who will be able to match their historic reputations and accomplishments. Loyalty, dignity, and humanity is what Walter Mondale and Joe Biden demonstrated in their Vice Presidencies and in their life stories, and both men will long be remembered and recognized as having contributed to the growing role of the Vice Presidency in American government. They are a model for future occupants of an office just a heartbeat away from the Presidency.