We’re Shifting from Protest to Resistance – Just Like People Did in the 60s.

Holly Scott is an Assistant Professor of History at Eastern Mennonite University and a native of Charlottesville, Virginia. She is the author of Younger Than That Now: the Politics of Age in the 1960s (University of Massachusetts Press, 2016). 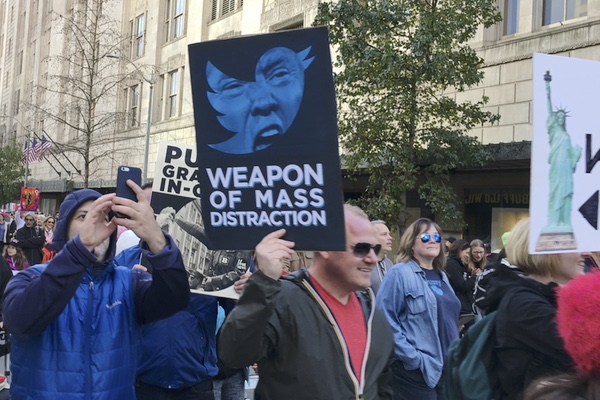 That can end badly if it devolves into infighting.

It’s been a year of fiftieth anniversary celebrations: photos of the summer of love and re-plays of the Beatles’ Sergeant Pepper’s Lonely Hearts Club Band. But 1967 marks another anniversary: the year the anti-war movement turned from protest to resistance. Resistance is back in 2017, bringing old dilemmas and a new level of acceptance. 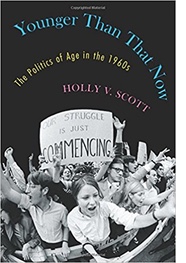 By 1967 major anti-war protest was common. But the war grew, and protestors wanted to move beyond teach-ins and legal rallies. Resistance, a slippery term, could do this. For some it meant draft resistance, accepting prison rather than entering the armed forces. For many the slogan was still nonviolent; taking over a building may be disruptive but can be done without violence. Others saw resistance as creating chaos in the streets. It could mean evading arrest, building a barricade, or committing vandalism or sabotage. Resistance to the war took cues from the black freedom struggle; the interconnectivity of movements fueled the sense protest had gone unheard for too long. Radicals understood the war in Vietnam as US imperialism abroad and oppression of people of color as a related form of imperialism at home.

The anti-war movement accommodated diverse visions about resistance by creating a tiered approach to protest. At the March on the Pentagon in October 1967, demonstrators could choose to: attend a legal rally, engage in nonviolent civil disobedience, break into the Pentagon, or try to levitate it. Multi-option protest persists today and was on display in Charlottesville on August 12. With it come familiar questions: when does resistance, especially if it is not strictly nonviolent, do more harm than good?

Ironically, in the late 1960s, both the Vietnam War and the anti-war movement became increasingly unpopular. From protest to resistance did not sit well with the average American. Even less popular was the idea of going from resistance to revolution. Check any textbook and you’ll find this interpretation: the movements of the 1960s started out noble but grew increasingly radical, alienating most Americans and burning out in a fit of rage.

Historians have long noted the problems with this narrative. It ignores that most demonstrators remained peaceful throughout the 1960s and that organizing did not collapse in 1970 but transformed. The narrative also glosses over the resistance the “good” early 1960s protests encountered. Critics faulted Martin Luther King for breaking laws and inciting hatred and violence. Many Americans endorsed King’s cause but not his tactics. The civil rights movement, too, experienced a dynamic tension between nonviolence and self-defense. What did it mean for nonviolent demonstrators to be protected by groups like the Deacons for Defense? For SNCC workers to live in homes where host families were willing to shoot back when attacked? Social movements are always messier than they look in memory.

Traditionally, Americans have been skeptical of protests that blur the line between violence and nonviolence and are quick to write off movements (particularly on the left or by people of color) that come across “too angry.” A strong narrative about what went wrong in the late 1960s, and an overly simplistic idea of what the early part of the decade looked like, adds to this. And so it is not surprising that there would be critics of Antifa a few weeks ago in Charlottesville. The antifascist group is not nonviolent, and critics have argued they are more likely to alienate rather than draw people in to a movement.

But there has been respect for Antifa as well. Cornel West credited the group with saving lives in Charlottesville. Discussions about Antifa, and resistance in general, echo radicals’ questions in the late 1960s. If colonized people (at home or abroad) rise up against oppression, is that the same as state violence, or violence in support of racism? Is doing nothing in the face of atrocities in Vietnam itself a form of violence? What responsibilities do whites, protected by privilege, have to take action? The questions remain; what’s new is how widely the conversation is happening.

What has created space in the mainstream for this conversation? As in 1967, people are fed up. In 2017 you can easily find a gray haired demonstrator holding the sign, “I can’t believe I’m still protesting this shit.” Sometimes the person with the sign is much younger. Activists often have a powerful sense of genealogy, inheriting and carrying on struggles. In some ways, we are all children of the sixties. An increasing number of Americans grew up post-Vietnam and post-Watergate. Many demonstrators in the 1960s started out believing in the promise of American democracy, but subsequent generations have grown up cynical. The 1960s woke the country not only to overt racism but named systemic racism and injustice. We get to a point of frustration faster because many Americans are better educated than ever before about how deep our problems go and how long people have been fighting.

Finally, there is President Trump. Presidents Johnson and Nixon had very real flaws and inspired much hatred, but neither was at the level of Donald Trump. Radicals in the late 1960s thought the US was veering perilously close to fascism, but this view didn’t extend outside the movement. Violence threatened ongoing civil rights work, anti-war demonstrators encountered force from police and sometimes counter-demonstrators, and being a hippie could get you beaten up in some parts of the country. But today having a palpable sense of threat is much more mainstream.

Neo-Nazis were not mobilizing or claiming an American president as an ally in the 1960s. What would that have looked like to the many middle aged Americans who, in 1967, last saw Nazis in combat or in concentration camps only a quarter century before? There are parallels between 1967 and 2017 but also many differences. Then, protesters sought to resist the state. This is still true, but resistance toward other mobilized groups—like armed white nationalists— creates a new dynamic.

Although there are notable differences between periods, thinking carefully about the legacy of protest to resistance is still helpful. The sixties were more complex than the cautionary tale of a good early sixties and bad late sixties allows, but there’s truth in that tale as well. Today’s movement must avoid the irony of a movement and its target both becoming unpopular. Americans who abhor neo-Nazis and racists, but do not easily identify with resistance, will need to figure in somehow — just as Americans who were against the war but resentful of protest needed to be cultivated.

Likewise, it would be a mistake to fall into old patterns of movement infighting. Holding conversations about tactics is healthy and necessary. But in the 1960s discussion often turned nasty—overly focused on correct action and ideology, different sides sure they, alone, were right and that others were “counter-revolutionaries.” In a media saturated culture, with less face-to-face discussion, this problem could be much worse today. For fifty years our nation has been stuck, unable to truly address inequality. As the next moment of protest to resistance unfolds, social justice movements must not also get stuck in the past, but find ways to listen and talk humbly together about next steps.