Could the Governor’s Race in Virginia Turn on the Question of Confederate Monuments?

Dr. Bruce W. Dearstyne is a historian in Albany, NY. SUNY Press published his book The Spirit of New York: Defining Events in the Empire State's History, in 2015.

The tragic events at Charlottesville, Virginia on August 12 have propelled the issue of Confederate monuments into the state's gubernatorial contest.

Republican nominee Ed Gillespie opposes removing Confederate statues and monuments but says he would defer to local officials. Democrat Ralph Northam says the statues should be taken down and moved into museums. The Virginia governor's race is a very tight one. The issue of the statues could conceivably determine the outcome. The candidate who is elected will need to deal with the issue next year. 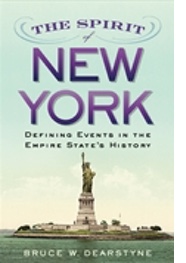 The Virginia monument at the Gettysburg Battlefield is a revealing example of how previous governors have invoked history in decisions involving the memorializing of the Confederacy.

The monument, dedicated a century ago, July 8, 1917, is inscribed: "Virginia to Her Sons at Gettysburg." It features figures arrayed around the base: a businessman, a professional man, a mechanic, a farmer, an artist, a young man, and a boy. But its most prominent feature is the large figure of Virginia native Confederate General Robert E. Lee.

The statue was dedicated by Democratic Governor Henry Carter Stuart, who served 1914-1918. Stuart had been a delegate to the 1902 state constitutional convention and helped write a poll tax provision and other restrictions that resulted in the disenfranchisement of many blacks and poor whites. As governor, he mostly avoided controversial issues and concentrated on administrative matters such as revising the Virginia Code and streamlining the state's taxation system.

In his dedication address, Governor Stuart asserted that the Civil War came because the nation was "torn asunder by divergent views of the Constitution." The causes were well defined in this quotation, he explained:

"Whether in the United States the citizen owed allegiance to the Federal Government as against his State Government was a question upon which men had divided since the birth of the Republic. The men of the North responded to the call of the sovereign to whose allegiance they acknowledged fealty—the men of the South did the same. It was a battle between rival conceptions of sovereignty rather than one between a sovereign and its acknowledged citizens."

Stuart did not identify the source of the quotation. Actually, it is from Beverly B. Mumford, Virginia's Attutude Toward Slavery and Secession, a popular book published in 1909 in Richmond, which was also used in some of the state's schools. Mumford was a proponent of what is often called the "lost cause" interpretation of the Civil War, which maintains that the southern states fought for constitutional principles, state's rights, and limits on federal authority rather than for slavery.

Mumford argued that Virginia did not secede to protect slavery, extend it into the territories, or from "a wanton desire to destroy the Union or from hostility to the ideals of its founders."

Rather, he insisted, Virginia decided to secede because of President Abraham Lincoln's determination to use military force to coerce the states that had already passed secession ordinances back into the Union.

Mumford referred to these as the "Cotton States" and explained that "...the strong anti-coercion sentiments among the Virginia people .... ultimately controlled their actions on the question of secession of their state ..... [T]he people of Virginia held that the Cotton States, having deliberately and with almost unexampled unanimity, decided to dissolve the political relations which formerly existed between them and their sister commonwealths, there was with respect to the legal and ethical character of this action no competent court of review this side of the judgment set in Heaven. The wisdom of their secession might be denied, the morality of their action might be questioned, the disastrous consequences to the Union might be admitted, but still no right existed in any body of men to invade their country and defeat their aspirations by the sword."

It was a neat argument–Virginia had to secede to join and defend its southern neighbors in asserting their right to leave the Union and form their own nation. Stuart explained that Lee had joined the Confederate cause mainly because his beloved native state, Virginia, done so. "The majesty of his character, the perfection of his manhood, and the glory of his genius, represents and embodies all that Virginia and her sister Southern States can or need vouchsafe to the country and to the world," said the governor.

But Governor Stuart did not mention the word slavery.

To many Americans, the Confederate statues, including Lee's, along with the Confederate flag, have become symbols of racism, white supremacy, and hatred. Virginia has about 223 monuments, buildings, parks, highways, schools and other public spaces dedicated to the Confederacy. Whoever is elected governor will deal with the issue by invoking and appealing to an interpretation of history. That sounds reassuring.

But Governor Henry Stuart tried to do something similar a hundred years ago, in 1917.

A century later, we are reminded how difficult it is.