Carly-Emma Leachman is a Doctoral Researcher and PhD Candiate at Nottingham Trent University. 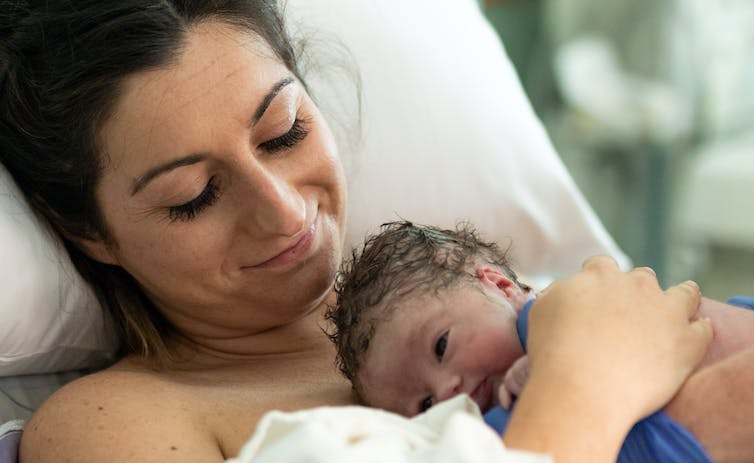 NHS maternity services are stretched and infant mortality rates in the UK are some of the worst in Europe. At last count, as many as 97.9% of births took place in hospital – despite the fact that hospital births aren’t always safer. Actually, the reason why the vast majority of women give birth in hospital has more to do with history, than with health outcomes.

During the early decades of the 20th century, the state was highly focused on making sure children survived into adulthood, as the national birth rate had been declining since 1918. Funding was ploughed into maternity and child services, to give children the best start. At the outbreak of World War II, preparations began to evacuate pregnant women close to giving birth to emergency maternity hospitals in the countryside, for their confinement.

Until this time, most women gave birth at home, usually with the assistance of a midwife. But this became much more difficult during the war, as midwifery services had been moved to the emergency hospitals outside the UK’s major cities. Today, research tells us that home births are often a safer option than hospital births. But while the NHS are trying to encourage women to consider home birth as an option, it’s proving hard to kick the nation’s habit of going to hospital.

On September 2, 1939, over 12,000 pregnant women left their homes to take up accommodation in rural areas to await the arrival of their baby. These women were expected to give birth in hastily amassed maternity “hospitals” provided by the Ministry of Health, then stay at their countryside billets for the remainder of the war. 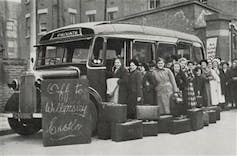 The evacuation was often shambolic, with reports of buses full of women ending up in the wrong places, while some had to hitchhike home with babes in arms. By the summer of 1940, night air raids were escalating, and this “emergency maternity service” was under increasing strain. There was a shortage of midwives, and medical staff were often in the wrong place at the wrong time.

Billets for women waiting to enter or leave hospital became increasingly hard to find. Pregnant women were seen as a troublesome type of evacuee in comparison with children and unattached military personnel, and the rates of compensation provided to householders for housing them were far lower than for other groups.

Nevertheless, there were more than 10,500 births in the emergency maternity homes in 1940, and this number almost tripled the following year. Even though the UK experienced less bombing during 1941, expectant mothers were leaving London for their confinements in droves.

The London boroughs were simply unable to meet demand for either home or hospital births. Bombing had destroyed a number of hospitals, and the upper floors of those still functioning were closed due to fears of further damage. Midwifery staff had been relocated to the country maternity homes and therefore there really was little choice for women but to go where the facilities were.

From mid-1942 onwards, some 1,000 to 1,500 women left the evacuation areas per month and emergency maternity homes were overflowing, meaning referrals had to be suspended. The bombs were no longer the reason that women were leaving the city to give birth – the beds were. Accordingly, in 1942 the government changed how it described the scheme, from an evacuation scheme to a “special scheme of country maternity homes for city mothers”. 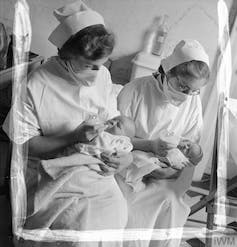 During the war, the state effectively constructed a national maternity system, with roughly 5,000 beds added to hospitals, which had offered strained and patchy maternity services at the onset of war. Prior to the Maternity and Child Welfare Act of 1918, state involvement in the delivery of babies would have been unimaginable. But following growing state investment and involvement before the war, the government had crossed the final threshold and taken responsibility for safe birth – where “safe” meant “in hospital”.

After constructing this national system, which meant that women could more easily access institutional maternity care, it proved difficult to reverse. When the Ministry of Health tried to close the evacuation scheme in 1947, its efforts were met with outcries from the London boroughs, which simply had no way of providing enough hospital beds for expecting women who wanted them.

The impact of this change resonated through the century: in the 1930s, home births in the UK accounted for over 90% of confinements, but by 1955 they made up just 33.4%. By the 1980s, the practice of home birth was almost eliminated, with only 0.9% of births taking place at home.

This trend also emerged in other Western democracies throughout the 20th century, but for different reasons. For example, home birth had been declining sharply in the US before World War II, with around 70% of births taking place in hospital by 1930. The US system also moved away from the practice of midwifery, to rely exclusively on the obstetric doctor. Only 0.9% of births in the US in 2017 were at home, a quarter of which were unplanned.

Despite an increasing uptake in hospital births for more complex cases, the UK had largely held on to midwife-led home birth during the interwar period. The wartime arrangements accelerated what had been a slow-burning change.

Today, NICE guidelines actively promote home birth as a safer choice for women having second or subsequent babies, and in 2017 home births had risen to 2.1%. But it’s still very much the norm to go to hospital. Women may no longer need to trek to the countryside, but the urge is still the same. In this time of extreme NHS strain, women are still heading to where the staff, and beds are.