What We Can't Forget As We Remember Anne Frank 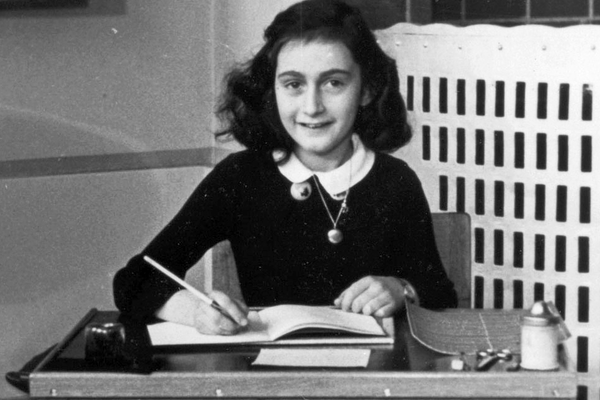 On grocery store checkout lines around the country this month, amidst the candy bars and zany tabloids, shoppers will find a glossy 96-page magazine called “Anne Frank: Her Life and Legacy.” Unfortunately, it fails to explain one of the most important but little-known aspects of the Anne Frank story—how her life could have been saved by President Franklin D. Roosevelt.

The new Anne Frank publication, compiled by the staff of Life magazine, is filled with photographs of Anne and her family, and a breezy overview of her childhood, tragically cut short by the Nazi Holocaust. Today, June 9, would have been her 90th birthday.

Little Anne, “thin as a wisp, curious, mercurial, and a know-it-all” at first enjoyed an idyllic life, “but outside the family circle, the world was changing,” Life recounts. Economic and social crises in Germany propelled Adolf Hitler to power in 1933, and Anne’s father, Otto, quickly moved the family to neighboring Holland for safety.

When World War II erupted in 1939, Life reports, Otto “frantically searched for ways to get his family away from the growing conflict” and “he hoped to emigrate to the United States.”

That’s all. No accounting of what happened when the Franks sought to emigrate to the United States. No explanation as to why the Roosevelt administration refused to open America’s doors to Anne Frank or countless other Jewish children.

Just the one vague allusion to Otto’s “hope,” and then quickly back to the famous story of Anne hiding in the Amsterdam attic and writing entries in her diary.

Here’s the part of the story that Life left out.

Laws enacted by the U.S. Congress in the 1920s created a quota system to severely restrict immigration. Roosevelt wrote at the time that immigration should be sharply restricted for “a good many years to come” so there would be time to “digest” those who had already been admitted. He argued that future immigration should be limited to those who had “blood of the right sort”—they were the ones who could be most quickly and easily assimilated, he contended.

As president (beginning in 1933), Roosevelt took a harsh immigration system and made it much worse. His administration went above and beyond the existing law, to ensure that even those meager quota allotments were almost always under-filled. American consular officials abroad made sure to “postpone and postpone and postpone the granting of the visas” to refugees, as one senior U.S. official put it in a memo to his colleagues. They piled on extra requirements and created a bureaucratic maze to keep refugees like the Franks far from America’s shores.

The quotas for immigrants from Germany and (later) Axis-occupied countries were filled in only one of Roosevelt’s 12 years in office. In most of those years, the quotas were less than 25% full. A total of 190,000 quota places that could have saved lives were never used at all.

Otto Frank, Anne's father, filled out the small mountain of required application forms and obtained the necessary supporting affidavits from the Franks’ relatives in Massachusetts. But that was not enough for those who zealously guarded America's gates against refugees.

Anne’s mother, Edith, wrote to a friend in 1939: "I believe that all Germany's Jews are looking around the world, but can find nowhere to go."

That same year, refugee advocates in Congress introduced the Wagner-Rogers bill, which would have admitted 20,000 refugee children from Germany outside the quota system. Anne Frank and her sister Margot were German citizens, so they could have been among those children.

Supporters of the bill assembled a broad, ecumenical coalition--including His Eminence George Cardinal Mundelein, one of the country’s most important Catholic leaders; New York City Mayor Fiorello La Guardia; Hollywood celebrities such as Henry Fonda and Helen Hayes; and 1936 Republican presidential nominee Alf Landon and his running mate, Frank Knox. Former First Lady Grace Coolidge announced that she and her neighbors in Northampton, Massachusetts, would personally care for twenty-five of the children.

Even though there was no danger that the children would take jobs away from American citizens, anti-immigration activists lobbied hard against the Wagner-Rogers bill. President Roosevelt’s cousin, Laura Delano Houghteling, who was the wife of the U.S. Commissioner of Immigration, articulated the sentiment of many opponents when she remarked at a dinner party that “20,000 charming children would all too soon grow up into 20,000 ugly adults.” FDR himself refused to support the bill. By the spring of 1939, Wagner-Rogers was dead.

But Wagner-Rogers was not the only way to help Jewish refugees. Just a few months earlier, in the wake of Germany’s Kristallnacht pogrom, the governor and legislative assembly of the U.S. Virgin Islands offered to open their territory to Jews fleeing Hitler. Treasury Secretary Henry Morgenthau, Jr. endorsed the proposal.

That one tiny gesture by President Roosevelt—accepting the Virgin Islands leaders’ offer—could have saved a significant number of Jews. But FDR rejected the plan. He and his aides feared that refugees would be able to use the islands as a jumping-off point to enter the United States itself.

At a press conference on June 5, 1940, the president warned of the “horrible” danger that Jewish refugees coming to America might actually serve the Nazis. They might begin “spying under compulsion” for Hitler, he said, out of fear that if they refused, their elderly relatives back in Europe “might be taken out and shot.”

In fact, not a single instance was ever discovered of a Jewish refugee entering the United States and spying for the Nazis. But President Roosevelt did not shy away from using such fear-mongering in order to justify slamming shut America’s doors.

The following year, the administration officially decreed that no refugee with close relatives in Europe could come to the United States.

Anne and Margot Frank, and countless other German Jewish refugee children, were kept out because they were considered undesirable. They didn’t have what FDR once called “blood of the right sort.” One year after the defeat of Wagner-Rogers, Roosevelt opened America’s doors to British children to keep them safe from the German blitz. Those were the kind of foreigners he preferred.

Life magazine’s tribute to Anne Frank is touching. The photos fill our hearts with pity. But by failing to acknowledge what the Roosevelt administration did to keep the Jews out, Life’s version of history misses a point that future generations need to remember: pity is not enough to help people who are trying to escape genocide.