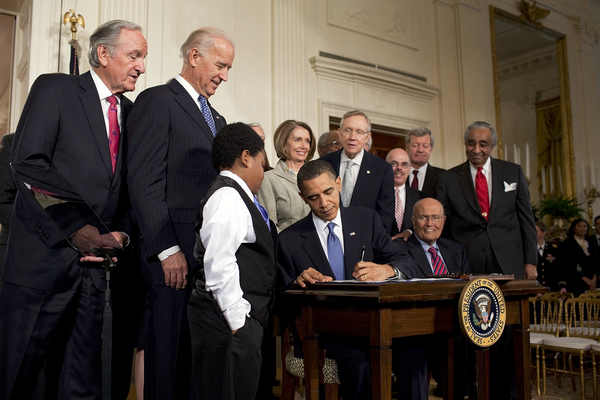 Another presidential election season is underway and our two major parties are about to reprise their familiar roles with respect to universal healthcare. Democratic candidates will propose various forms of universal healthcare including Medicare for all. Republicans will make accusations about socialism and socialized medicine. If the Democrats win the presidency and both houses of Congress, another legislative healthcare battle will occur alongside a battle for the minds and hearts of the American people. This drama in which Democrats move toward universal healthcare and Republicans cry socialism has happened before, and it is instructive to analyze this history with a view toward what can be expected in the future.

The earliest reference to universal healthcare came in 1912 when former president Theodore Roosevelt, then running as the Progressive Party’s presidential candidate called for "the protection of home life against the hazards of sickness, irregular employment and old age through the adoption of a system of social insurance adapted to American use."

Social insurance, however, did not arrive until the passage of the Social Security Act in 1935 although the legislation lacked provisions for health care. While health care had been discussed on Capitol Hill, President Franklin Roosevelt (FDR) among many others felt the idea was too controversial and would threaten the passage ofthebill.

FDR’s successor Harry Truman became the first sitting president to propose universal healthcare. Truman’s proposals in 1945 and again in 1949 generated the virulent opposition that would arise several more times during the next sixty-plus years. Not only insurance companies, but the American Medical Association (AMA) fought to destroy any chance of universal healthcare. The AMA called Truman’s ideas “un-American” and accused him of following the “Moscow party line.” This kind of name-calling would be become a staple of the attacks opponents would aim at the proponents of universal healthcare. Under such withering scorn, Truman’s proposal went nowhere.

Duringthe 1950s increasing numbers of Americans obtained health insurance through their jobs, but the cost remained prohibitive for many including most senior citizens. In 1957 two Democratic members of the House of Representatives Aime Forand of Rhode Island and Cecil King of California proposed a health insurance plan for seniors under Social Security. The media called the plan Medicare.

Congress took no action on the measure then, but in 1962, President John F. Kennedy revived the proposal calling for a system of health insurance for senior citizens under Social Security. Again, the AMA fought back this time using a previously recorded speech by television/movie actor Ronald Reagan, attacking socialized medicine, specifically the Forand/King Medicare bill. In his talk, Reagan spoke of the dangers of socialized medicine and declared that Medicare would be the first step toward making health care a government enterprise. Reagan concluded by warning “…one of these days you and I are going to spend our sunset years telling our children, and our children’s children, what it once was like in America when men were free.” The public was not informed that Reagan’s recording was the product of the AMA. The pressure worked. A coalition of Republicans and Southern Democratic senators defeated Medicare by just four votes.

Kennedy’s successor, Lyndon Johnson, revived the legislation but even his legendary legislative skills were not enough to get Medicare passed in his first year. Wilbur Mills, (D-AK), the powerful chairman of the House Ways and Means Committee, thought the program would be too expensive. However, when the Democrats won huge majorities in both houses of Congress in the 1964 elections Johnson had his opportunity. Not only did Medicare become law in 1965, but Mills was unable to block Medicare and decided to expand the Kerr-Mills Act, a health care program for the indigent which became known as Medicaid. Under the new program, each state was required to extend healthcare to the poor. Previously each state could decide who qualified.

Again, the AMA used the accusation of socialism to fight Medicare and Medicaid. This time however, facing an overwhelming Democratic majority, the AMA proposed “Eldercare,” an alternative plan to promote private health insurance for the elderly that gave federal grants to states to aid seniors too poor to buy health insurance. The AMA spent millions on television advertisement and lobbying hoping to lure enough moderate Democrats and liberal Republican support for the plan without success.The Eldercare effort failed. Medicare and Medicaid passed Congress. Johnson signed the bill into lawon July 30, 1965 in Independence Missouri alongside Harry Truman. Almost three decades would pass before another significant attempt would be made to achieve universal healthcare.

By 1992, about fifteen percent of the population or nearly forty million Americans lacked health insurance. Bill Clinton campaigned on that issue and eight months after his inauguration, he debuted his universal healthcare plan charging his wife, First Lady Hillary Clinton with its passage.

Yet the opposition mobilized to defeat the plan using the same fear-based tactics. But this time, the health insurance industry took the lead spending millions on critical ads including the “Harry and Louise” television ad in whicha middle-class couple appeared overwhelmed by the complicated Clinton healthcare plan. The health insurance industry’s efforts were aided by other Republican activist efforts including one led by William Kristol which convinced Congressional Republicans especially Senate Republican leader Robert Dole (R-KS) to avoid compromise. The Clinton plan never came to a vote in either house of Congress.

In 2008, Barack Obama and his chief rival for the Democratic nomination Hillary Clinton both campaigned on the promiseof universal healthcare. Like Bill Clinton had previously, Obama introduced his universal healthcare plan eight months after taking office. The Affordable Care Act (ACA), nicknamed Obamacare, sought to regulate the health insurance industry. Under the plan Americans were required to obtain health insurance. Private businesses were required to provide health insurance with smaller companies receiving tax credits for doing so. States would form insurance exchanges for those unable to obtain insurance through work. The federal government would form exchanges in states that refused to form their own. Medicaid would be expanded to for those at 133 percent of the poverty level, but only in states that allowed it. Most importantly, health insurance companies could no longer deny anyone coverage due to a pre-existing condition. ACA also contained a government option in addition to private insurance companies, but that was quickly omitted in Congressional deliberations.

Once again opposition arose. Republicans and the health insurance companies cried “socialism” and “government takeover.” However, the political climate had changed. ACA was signed into law in March 2010 and within six years the number of uninsured Americans dropped from about 16 percent to 9 percent. The law remains in effect although battered to some extent with the tax penalty for not having insurance repealed and a court ruling against the individual mandate.

What does this brief history tell us about the fight for universal healthcare tell us? First, progress has been slow. Second opposition has been fierce. Each time universal healthcare came close even for just a segment of the population, the opposition has used fear-based rhetoric to defeat the legislation. Moreover, whatever interest group felt threatened has spent the most and worked the hardest to defeat the legislation. From the 1940s to the 1960s the AMA led the opposition. By the 1990s and beyond, the insurance companies joined by the Republican Party were the legislation’s chief opponents. It’s also worth noting that at the same time the center of the debate has shifted radically. Prior to 1965, many Americans considered a system of government health care totally antithetical to America. By 2009 opponents of the ACA were complaining that that the new law would interfere with their Medicare benefits.

Will Medicare for all ever be accepted? It’s difficult to say. Certainly, more battles lie ahead. Universal healthcare is certain to be a major issue in the upcoming 2020 presidential election, and we can expect to hear more of the fear-tinged rhetoric from its opponents. However, that tactic may now be approaching the end of its usefulness. The late conservative commentator Charles Krauthammer predicted that universal healthcare was inevitable because ACA had instilled that idea in the minds of many Americans. Those in opposition, he said, were on the wrong side of history.