Richard Moe served from 1977 to 1981 as chief of staff to Vice President Walter Mondale and as an assistant to President Jimmy Carter. He is the author, most recently, of Roosevelt’s Second Act – The Election of 1940 and the Politics of War. 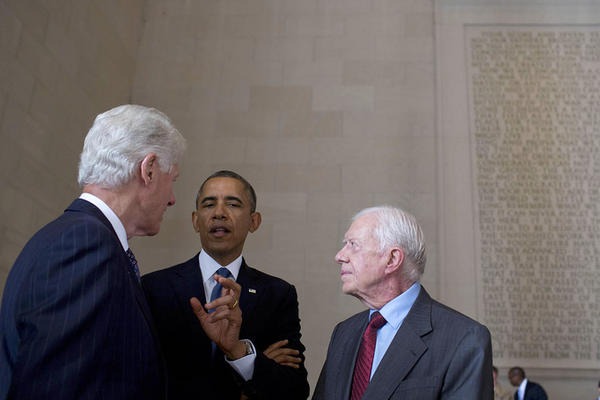 There are at least two compelling reasons why this is a good time to reassess the presidency of Jimmy Carter. First, he is rapidly approaching his 95th birthday. On October 1, one month from today, he will solidify his record as America’s longest living former president. Second, during a brief but revealing dust-up between Donald Trump and Jimmy Carter recently, the President of the United States told us he thought his predecessor was a “terrible” and “forgotten” president.  Having served four years in the Carter-Mondale White House, I believe strongly both assertions are dead wrong, and will argue here that Carter’s was one of the most consequential presidencies in recent history, particularly in his commitment to human rights.

When Americans think of Jimmy Carter today, they often hasten to commend his work after he left the White House. He and his wife Rosalynn founded the Carter Center in Atlanta dedicated to promoting democracy in emerging countries, to resolving international disputes peacefully, and to eradicating, especially in Africa, chronic and deadly diseases such as guinea worm. He has set a new standard for former presidents by selflessly dedicating himself to help people around the world improve their lives.

As worthy as Jimmy Carter’s post-presidency has been, it shouldn’t overshadow his time in office, which has been too often overlooked, and which stands in sharp contrast to what we see in the White House today. President Carter was well known for tackling almost every tough issue that came his way, usually regardless of the political cost:

*Carter struggled with a chronic energy crisis, but in the end he put the country on a clear path to energy independence.

* By deregulating natural gas and appointing Paul Volcker to head the Federal Reserve, he brought inflation under control, where it remains.

* Carter appointed more women, African Americans and Hispanics to judgeships and senior positions than all of his 38 predecessors coimbined.

*He created new departments of Energy and Education, but perhaps the most significant structural change he made was the creation of “the modern vice presidency,” which he and Walter Mondale shaped to enable the nation’s number-two elected official to reside just steps from the Oval Office, with complete access to the president and the White House information flow, and to be available to the chief executive for advice and/or special assignment. This model has been replicated, with appropriate modifications, by almost every subsequent administration.

*With use of administrative tools and the cooperation of Congress, President Carter successfully lead the effort to protect, incredibly, 140 million acres as new parklands, wildlife refuges, national forests and wilderness areas in Alaska.

Carter’s accomplishments in the international arena were equally impressive:

* He brought about a lasting peace between Israel and Egypt after 13 intense days at Camp David with Anwar Sadat and Menachem Begin.

* Carter proposed transferring control of the Panama Canal to the people of Panama, perhaps the toughest issue of all, by his own account.  The canal today under the Panamanians is an unqualified success story.

*He also reached an arms control agreement with the Soviet Union and normalized diplomatic relations with China. The list goes on, all of it spelled out in Stuart Eizenstat’s splendid and thorough new book, “President Carter.”  Other Carter biographies are in the works, ensuring that his presidency will not be “forgotten.”

In the administration’s final days, Vice President Mondale famously summarized the four years: “We told the truth, we obeyed the law, and we kept the peace,” words Carter had inscribed on the wall of The Carter Center. In 2015, in the introduction of his then-new book, “A Full Life,” he repeated the Mondale quote, and then wrote these words, “I would add. ‘We championed human rights.’”

It was an appropriate addition to his legacy, because, as he said later, “I decided that human rights would be the centerpiece of our foreign policy.”  More than any other president since Abraham Lincoln, Carter consistently embraced human rights, whatever other issues required attention.  Even Panama was a human rights issue because U.S. control of the canal embodied America’s flirtation with imperialism in an earlier era, and thus impeded our ability to promote democracy in a region enamored by authoritarianism.

After years of American neglect, the president dispatched his U.N. ambassador, Andrew Young and others to Africa to bring aid and American values, a combination that won many new friends. He sent Vice President Mondale to meet with Prime Minister Vorster of South Africa to state America’s unequivocal opposition to apartheid. Mondale also sought Vorster’s assistance in bringing majority rule to Zimbabwe/Rhodesia. Virtually all of these Carter initiatives were ultimately successful.

It was this kind of principled and courageous leadership that earned Jimmy Carter the Nobel Peace Prize for his “untiring effort to find peaceful solutions to international conflicts, to advance democracy and human rights, and to promote economic and social development.”

As impressive as all this is, the administration’s record was not without setbacks. In the early years, the American people were hurt by high prices and long gas lines, painful reminders of a staggering economy and an uncertain energy future. By the end of his term, however, solid policies were in place in both sectors, and prosperity was in sight, if not yet fully in place.

Carter was committed to achieving universal health care, but believed it had to be achieved incrementally so he proposed a universal catastrophic plan ensuring that no family’s resources would be depleted by a serious illness or injury.  But Senator Ted Kennedy, who planned to challenge the president for the 1980 nomination, insisted that the nation move immediately to universal coverage. Negotiations between the two broke down; Kennedy refused to compromise even after he lost his campaign for the nomination; sadly, the nation had to wait another 30 years to advance the cause of universal health care.

When the Soviet Union invaded Afghanistan, Carter imposed stiff economic sanctions, a controversial decision in the farm belt. He began a buildup of American military might  -- continued by President Reagan -- that the Russians were compelled to match, eventually bringing on the economic crisis that caused the Soviet Union to disintegrate.

Perhaps most damaging to Carter, Iranians took 52 diplomats and others from the U.S. embassy in Tehran hostage for 444 days. Working patiently to secure their release through diplomacy with no results, he finally ordered the military to plan and execute a risky rescue mission, which tragically fell victim to desert sand fouling the helicopter engines on which the mission depended. Dejected but still determined, Carter continued to negotiate for the release of the hostages, which he ultimately secured, although the Americans did not clear Iranian air space until minutes after Carter officially left office.

If Jimmy Carter had a flaw as president, it wasn’t in the areas of policy or principle, but rather in the politics surrounding an issue.  He believed the campaign was over and he hated hearing political arguments in policy discussions.  I remember sitting in the cabinet room early on when someone made a political point about welfare reform; the president looked at him with his steely blue eyes and said, “I want to hear substantive arguments, I’ll take care of the politics.” Well, sometimes he did and sometimes he didn’t, but I saw him soon come to recognize that effective governance requires a mix of both policy and politics, in the right measure at the right time.  He continued to grow in the office, and never strayed from what he thought was best for the country.  Through four years in the White House, I never failed to feel proud to be there and to work for this president.

It was true what Mondale had said, as amended: “We told the truth, we obeyed the law, we kept the peace and we championed human rights.”  Those words deserve serious reflection, because they bear virtually no resemblance to what we see in the presidency today, certainly not on our southern border.