Joseph S. Nye is a professor at Harvard and author of Do Morals Matter? Presidents and Foreign Policy from FDR to Trump (Oxford University Press, 2020). 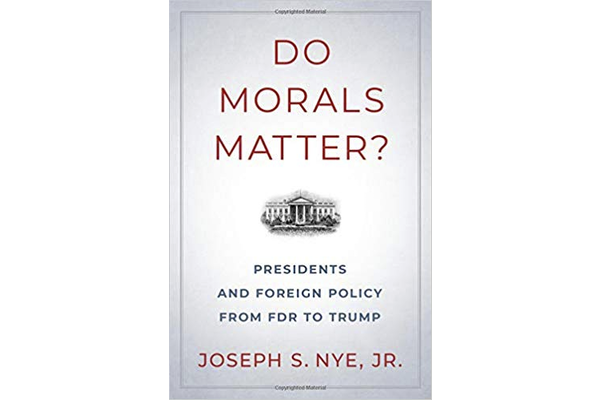 Do morals matter in American foreign policy, or is American moralism just hypocrisy as realists teach us? Conventional wisdom is skeptical and surprisingly few books and articles focus on whether presidents’ moral views affected their foreign policies and how that should affect our historical judgment of them. I set out to answer these questions in my new book Do Morals Matter? Presidents and Foreign Policy from FDR to Trump.

Examining 14 presidencies since 1945 shows that a radically skeptical view of morality is bad history. Morals did matter. For example, a purely realist account of the founding of the postwar order in terms of the bipolar structure of power or an imperial imposition of hegemony does not explain FDR’s Wilsonian design or Harry Truman’s delay in adapting it after 1945, or the liberal nature of the order that was created after 1947. George Kennan suggested a realist policy of containment, but Truman defined and implemented it in broader liberal terms.

Similarly, an accurate account of American intervention in Korea in June 1950—in spite of the fact that Secretary of State Dean Acheson had declared earlier that year that Korea was outside our defense perimeter—would have to include Truman’s axiomatic moral decision to respond to what he saw as immoral aggression. Similarly, to explain the major elevation in the priority of human rights in American foreign policy after the Vietnam era, we must include the moral outlook of Jimmy Carter. Ronald Reagan’s decision to ignore his advisors and his previous harsh rhetoric about the “evil empire” must be understood in the light of his personal moral commitment to ending the nuclear threat.

Looking back over the past seven decades of American primacy, we can see certain patterns in the role of ethics and foreign policy. All presidents expressed formal goals and values that were attractive to Americans. After all, that is how they got elected. All proclaimed a goal of preserving American primacy. While that goal was attractive to the American public, its morality depended on how it was implemented. Imperial swagger and hubris did not pass the test, but provision of global public goods by the largest state had important moral consequences.

The moral problems in the presidents’ stated intentions arose more from their personal motives than from their stated formal goals. Lyndon Johnson and Richard Nixon may have admirably sought the formal goal of protecting South Vietnamese from Communist totalitarianism, but they also expanded and prolonged the war because they did not want to be “the man who lost Vietnam.” In contrast, Truman allowed his presidency to be politically weakened by the stalemate in Korea rather than follow General Douglas MacArthur’s advice of using nuclear weapons. Morality mattered greatly in both these cases.

If we determine morality based on the three dimensions of intentions, means and consequences, the founding presidents of the post-1945 world order—FDR, Truman, and Eisenhower—all had moral intentions, both in values and personal motives, and largely moral consequences. Where they sometimes fell short was the dimension of means, specially the use of force. In contrast, the Vietnam era presidents, particularly Johnson and Nixon, rated poorly on their motives, means and consequences. The two post-Vietnam presidents, Gerald Ford and Jimmy Carter, had notably moral foreign policies on all three dimensions but their tenures were brief, and they illustrate that a moral foreign policy is not necessarily the same as an effective one. The two presidents who presided over the end of the Cold War, Reagan and George H.W. Bush, also scored quite well on all three dimensions of morality. The years of unipolarity and then the diffusion of power in the twenty-first century produced mixed results with Bill Clinton and Barack Obama above the average and George W. Bush and Donald Trump falling well below average. Among the fourteen presidents since 1945, in my view the four best at combining morality and effectiveness in foreign policy were FDR, Truman, Eisenhower, and Bush 41. Reagan, Kennedy, Ford, Carter, Clinton and Obama make up the middle. The four worst were Johnson, Nixon, Bush 43, and (tentatively because of incompletion) Trump. Of course, such judgments can be contested and my own views have changed over time. Historical revision is inevitable as new facts are uncovered and as each generation re-examines the past in terms of new circumstances and its changing priorities.

The importance of prudence as a moral virtue in foreign policy becomes clear when one compares Dwight Eisenhower’s refusal to send troops to Vietnam with John Kennedy and Lyndon Johnson’s decisions. After losing 241 Marines in a terrorist attack during Lebanon’s civil war in 1983, Reagan withdrew the troops rather than double down. Similarly, Obama and Trump’s reluctance to send more than a small number of forces to Syria may look different with time. Bush 41 was criticized for restricting his objectives, terminating the Gulf War after four days’ fighting, and not sending American armies to Baghdad in 1991, but his decision seems better when contrasted with the lack of prudence that his son showed in 2003 when members of his administration expected to be greeted as liberators after the invasion of Iraq and failed to prepare adequately for the occupation. In foreign policy as in law, some levels of negligence are culpable.

Realists sometimes dismiss prudence as an instrumental and not a moral value, but given the complexity and high prospect of unintended consequences when judging the morality of foreign policy decisions, the distinction between instrumental and intuited values breaks down and prudence becomes a crucial virtue. Moral decisions in foreign policy involve both intuition and reason. Willful ignorance or careless assessment produces immoral consequences. Conversely, not all decisions based on conviction are prudential, as some of my cases indicated. Truman’s response to North Korea’s crossing the 38th parallel in Korea, for example, was imprudent, though he saw it as a moral imperative. These reasoned and intuited virtues can conflict with each other. Principle and prudence do not always coincide. The problem that presidents often face is not a question of right versus wrong, but right versus right. But whatever the choices, they cannot be dismissed on the basis of simplistic realist models of “national interest.” What matters is how interest was defined, and to answer that question, good history shows that morals mattered.