Jeffrey H. Jackson is Professor of History at Rhodes College in Memphis, Tennessee. An expert on European history and culture, he is the author of Paris Under Water: How the City of Light Survived the Great Flood of 1910 and Making Jazz French: Music and Modern Life in Interwar Paris. His new book Paper Bullets: Two Artists Who Risked Their Lives to Defy the Nazis will be published on November 10. 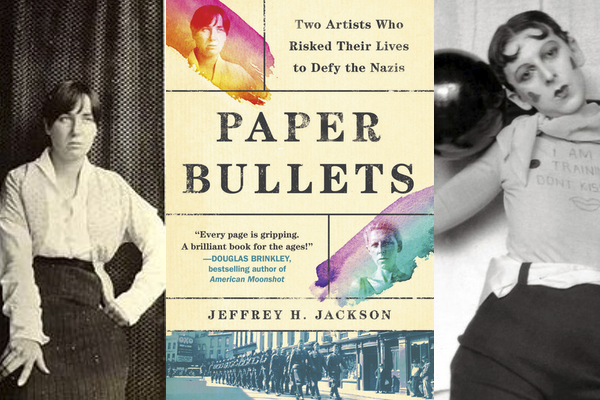 Whenever Lucy Schwob and Suzanne Malherbe went into town to do some shopping, they also snuck messages to the Nazi occupation forces.

Suzanne pulled a small note typed on a piece of thin colored paper from inside the pocket of her Burberry overcoat and stuck the message onto the windshield of a German staff car.  Lucy gingerly placed another on a cafe table as they walked down the street.  Working together, they tucked one inside a magazine for a soldier to discover.  Sometimes, Suzanne snuck up alongside a German and, with a trembling hand, slipped a note into his pocket knowing that a bump or a misstep could lead to time in a prison camp.

In 1937, Lucy and Suzanne had left Paris and moved to the island of Jersey, one of the British Channel Islands just off the coast of Normandy.  Both were in the their late 40s and ready to start a new chapter of life on the beautiful island after living for so long at odds with the world around them.  They fell in love as teenagers, but being lesbian partners in a conservative turn-of-the-century France was sometimes painful.  Lucy’s father’s family was Jewish at a time of growing anti-Semitism.  By the 1920s, they achieved some success in Paris as avant-garde artists; they are known today for their Surrealist photography.  New gender-neutral artistic names Claude Cahun (Lucy) and Marcel Moore (Suzanne) allowed them to create new identities that crossed the boundaries between masculinity and femininity.  They associated with communists and flirted with radical politics.

But Lucy and Suzanne were always the quiet sort.  Although they opened their apartment to creative friends and socialized in Parisian cafés, they remained most closely connected to one another.  When Paris became too noisy and politically polarized, the women decided to leave it all behind.

The Nazis took control of the Channel Islands in July 1940.  This archipelago in the English Channel was the only British soil the German army ever conquered.  It was also strategically important because it became the leading edge of Hitler’s “Atlantic Wall,” a series of fortifications along the European coastline designed to prevent Allied attack.  No dissent could be tolerated there.

Working together in the dim light each evening, Lucy and Suzanne wrote subversive messages by pushing cigarette paper, pages torn out of a ledger, or scraps they found on the side of the road into their Underwood typewriter.  They tapped out songs and imaginary dialogues designed to undermine morale.  Sometimes they made fun of Nazi leaders with bawdy jokes or included a simple summary of forbidden BBC news reports.  Written in German in the voice of an anonymous soldier, the notes proclaimed that the troops would pay the ultimate price for Hitler’s futile war.

Then Lucy and Suzanne crammed the notes down deep into the pockets of their overcoats and headed out on another mission.  They always worked alone.

As the war escalated, the women became more extreme.  Lucy snuck out at night and dashed through the cemetery near their house to place crosses with the pacifist message, “For him the war is over” onto the graves of soldiers who had died during the occupation.  Inside a church where soldiers worshipped, they hung a banner claiming that Hitler believed he was greater than Jesus.

Back in Paris, Lucy had formulated a vision of resistance she called “indirect action.”  Art that tried to be revolutionary would not work, but a thoughtful poem, provocative story, or surprising photograph could have a profound effect on its audience, burrowing inside the mind and germinating into a new perspective.  This was not propaganda, she claimed, but an attempt to challenge people to think.  It was the introvert’s way of fighting.

The German secret police hunted them for four years, and during their trial, the chief judge told them why.  He accused them of being guerrilla warriors who were more dangerous than soldiers.  “With firearms,” he claimed, “one knows at once what damage has been done, but with spiritual arms, one cannot tell how far reaching it may be.”  It was a perfect summary of Lucy’s “indirect effect.”

These notes might have seemed small and insignificant, but they demonstrated that the Nazis could not colonize the human heart.  And Lucy and Suzanne’s story shows that quiet, persistent rewriting of the narrative of oppression can be a powerful means of fighting back.