AJ Wong is the granddaughter of a Chinese American WWII veteran. She studied civil engineering and Chinese at Case Western Reserve University. You can follow her on Twitter @_ajwong. 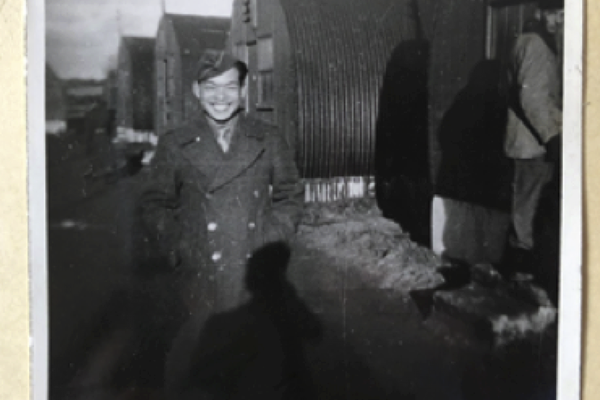 On December 9, 2020, Congress will officially award all Chinese American World War II veterans with one of the highest civilian awards, the Congressional Gold Medal, in a virtual ceremony. Chinese Americans will join other WWII veteran minority groups such as Filipino Americans, Japanese Americans, the African American Tuskegee Airmen, and Native Americans in receiving this honor. In late 2019, I heard about various recognition efforts sponsored by the Chinese American Citizens’ Alliance (CACA), including an online registry of veteran names and a fundraiser to provide replica medals for veterans or their next-of-kin.

My grandpa is one of the more than twenty thousand Chinese American veterans who served in the U.S. Armed Forces during WWII. Growing up, one of the few things I knew about Grandpa was that he served in the Army during WWII, and at some point was a translator and photographer. Grandpa died decades before I was born, so most of what I knew about him came second-hand. After hearing about the online registry, I encouraged my family to register Grandpa.

The CACA’s stiff documentation requirements and vetting process for the online registry sent me texting relatives and rummaging through my family’s storage. We had to find Grandpa’s active duty discharge (DD-214) form, a photo of him in uniform, or one of a host of other means to prove his honorable service[iii]. We carefully leafed through tattered envelopes lined with tape reading, “OPENED BY U.S. ARMY EXAMINER” and came across a black piece of paper with words in white that didn’t make any sense: “ESENIHC”, “54 TCO.” Evidently, this wasn’t some codified message, but a photographic negative of Grandpa’s DD-214 form indicating his race (CHINESE) and separation date (OCT 45). Grandpa had the foresight to photograph this document; I wondered how many veterans didn’t. A couple of weeks later, my aunt lent me a stack of family photo albums, among them a scrapbook made by Grandpa chronicling his days in England while serving in WWII.

A three-ring binder bound cut manila folders. The glue and tape still held together photos of a bomb-shelled cathedral, Buckingham Place, and portraits of young men and women with notes inscribed in both Chinese and English reading, “to my best friend”; and “to a friend and kind son.” One particular photo, however, caught my attention. A young man not more than twenty-five stood off to the left side of the frame with a beaming smile. Behind him is a row of Army barracks. Someone is entering a barrack, looking over his shoulder at the young man. It appears to be winter or spring - the young man is huddled in a long coat with his hands tucked in his pockets. In the foreground a shadow is cast upon the young man, presumably of the person taking the photo of him.

It was not only the young man’s beaming smile that caught my attention. At the bottom of the photo, a caption written in neat cursive by Grandpa read, “Hoy Lim.” I only knew one second-hand story of Grandpa’s experiences in WWII. Grandpa apparently named his firstborn son after a person named Hoy, who was killed by Germans while crossing a river. Hoy was very enthusiastic and always “first in line” to do everything. For the longest time I took this story as just family lore, but in the moments after seeing that caption the story seemed convincingly true.

The name “Hoy Lim” wasn’t in the CACA’s online registry, which means his next-of-kin hadn’t gone through the arduous process of upending attics to find acceptable documentation and register him. As of August 2020, 2,763 veterans were registered in the online registry, out of the estimated 23,000 Chinese Americans that served in WWII. The US government didn’t compile a single list showing exactly how many Chinese Americans served; personnel records were “not a top priority.” Thus, private organizations conducted their own research.

Documentarian E. Samantha Cheng led an independent research team to name each of the roughly 23,000 Chinese American veterans. They searched records from the U.S. National Archives and Records Administration, veterans and military organizations, and genealogical databases. The group’s findings are published in Honor and Duty: The Chinese American WWII Veterans. Understandably, such a large undertaking is imperfect and unfortunately, Hoy Lim’s name is missing from there too.

Determined to find out all I could on Lim, I came across a niche website called FindAGrave.com. FindAGrave is an online database of gravesites curated by a community of volunteers. Volunteers create memorial pages, request photos of headstones, and fulfill requests for photos from around the world. By sheer luck, volunteers Russ C., Janice Hollandsworth, and Michelle Repp had already completed the three-step process that led to a photo of Lim’s headstone, a transcript of Lim’s obituary, and a news clipping listing those killed in action in 1944, from the Chicago Tribune.

When the war ended in 1945, Grandpa made it home, but his close friend, Private Hoy You Lim (林開祐), didn’t. Private Lim was killed in action while crossing a bridge leading to the city of Angers, France on August 9, 1944 at the age of 26. He was the first Chinese American from Chicago to be killed in action during World War II. Grandpa took that photo of Private Lim around 1944 in England.

Private Lim is laid to rest at Mount Auburn Memorial Park in Stickney, Illinois. According to Repp, who snapped the photo of Lim’s grave in 2018, White Americans in Chicago did not want to be buried next to Chinese Americans. Thus, Chinese Americans were pushed to a secluded Chinese section at Mount Auburn, which is directly connected to Chinatown via Pershing Road. Despite Lim’s ultimate sacrifice for America as an American, he was still seen first and foremost as Chinese in death as in life.

In April 1941, less than two years after arriving in America, Lim was drafted into the U.S. Army following the Selective Service and Training Act of 1940, the first peacetime draft in US history. Both Lim and Grandpa were one of the more than 20 percent of the total Chinese American population in the lower 48 states who served. The Chinese American population was disproportionately drafted since the nature of the Exclusion laws favored an overwhelmingly male bachelor society.

The sacrifices made by Private Lim and his contemporaries of the “Greatest Generation” are reminders that they believed in the promise of America. Like many minorities at the time, Chinese Americans like Lim honorably served despite facing civil and systemic injustices. Lim lived in the US for less than two years before being drafted, but undeniably stood by America even at a time when America did not always stand by him. Lim, along with other Chinese American WWII veterans, proved that sacrifice is not bound by length of tenure in America nor by race.

Ultimately, Private Lim lived up to his name. Hoy You (開祐), in Chinese, literally means “open protection.” Lim willingly protected his country with his life and paid the ultimate price. Grandpa saved documents and moments dear to him; he made sure Lim was known beyond a name on a headstone and serial number on a casualty list. However, we will never know the life Lim lived, or would have lived; we can only imagine it. The character and dreams behind the young man smiling brightly in the photo remains largely unknown. We must remember that not all who fought will be remembered in a meaningful way – that is the cost of war.