David O. Stewart is the author of George Washington: The Political Rise of America’s Founding Father, which was released by Dutton Books on February 9; for a review, look here. 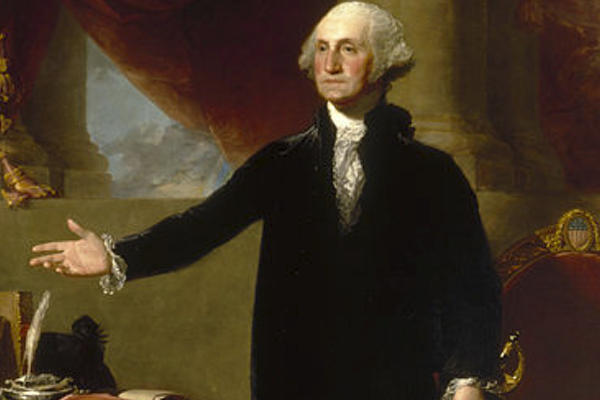 In more than two centuries since I left the presidency, I have struggled many times to hold my tongue concerning the course of my successors.  It remains a sore trial merely to hear the names of James Buchanan and Andrew Johnson.

Cognizant as I am that advice is rarely welcomed, even when delivered from beyond the grave, I cannot remain silent at this pivotal moment for our republic, the success of which was the pre-eminent object of my life.  You have just taken office as president and face domestic and natural crises as threatening as any armed conflict.  I offer these modest precepts as evidence of my warm hopes for the restoration of our experiment in self-government.

Integrity Matters – Corruption, self-dealing, and greed have always been with us.  My Deputy Secretary of the Treasury was caught fiddling with public securities.  He was promptly dismissed.  My second Secretary of State entered into compromising conversations with the French ambassador.  He, too, was soon gone.  The president and senior officials must never serve their own interests at the expense of the people.

Presidential Norms Matter – We did not have this term, but well knew its substance.  A president without dignity wounds the dignity of the presidency.  You must accord to Congress, judges, and state officials the respect that their offices warrant, even if their behavior disappoints you.  The president must never use the powers of office to persecute adversaries or protect friends.  Foreign powers must be held at arm’s length; they will ever pursue their own interests, never those of the United States.

Do Not Lose Your Temper in Public – Known for having a high temper, I well understand the urge to unburden one’s mind to those who misapprehend the public good.  Doing so, however, forfeits the stature of your office.  Also, you now have something called “tweets”?  Forbear from tweeting.

Do Not Dwell on Who Gets the Credit – Your responsibility is to preserve and strengthen this much-blessed nation.  If you succeed, it will be noticed.  If you fail, that too will be noticed.  Chasing after praise will change neither outcome.  In my first term, we struck a bargain to heal the country’s finances while placing our seat of government on the banks of the Potomac. Historians credit the deal to Hamilton and Madison and Jefferson.  I have oft been tempted to point out who was then president, and that the president alone was gratified by both halves of that bargain.  It remains a great temptation. (see Robert P. Watson redeeming Washington's role in siting the capital city here—ed.)

You Cannot Fix Everything – Address what is most important.  Perfection is not possible.  In my years as president, we made a viable constitutional republic and avoided foreign wars.  The nation enjoyed prosperity after a crushing economic depression.  Those were my highest goals.  When I went home, much remained to do:  the French terrorized our shipping; white settlers stole Indian lands; slavery prevailed widely; we had neither a national university nor a serious military establishment.  And yet I finish very well in those presidential rankings your historians persist in creating.

Draw the Nation Together – Factionalism and internal strife were great dangers in my time, and are again.  As a Virginian, I was mistrusted by the commercial and laboring people of New England.  In my first journey as president, I traveled through the northeast to meet its people and demonstrate my good will.  You would be wise to tread a similar path.

Consider What History Will Think – You confront daunting decisions.  Concerns of the moment should not control your choices.  Consider, rather, what will seem right in years and decades to come.  You will not go wrong.

There Are Worse Things Than a One-Term President – I am remembered for setting the precedent of serving only two terms in office.  What is forgotten is how I longed to leave office after one term, but my friends insisted I must serve another.  A second term affords greater opportunity to annoy the people as errors accumulate and achievements become more elusive.  Four years are sufficient.  That Lincoln fellow, you know, served only one term.  He is remembered rather well.