"We Just Did What We Had To": Telling the Story of a Slovenian Partisan and a Kiwi POW

Doug Gold is a retired broadcaster with a passion for historical and fact-based stories, and the author of Fun Is a Serious Business, a nonfiction account of More FM’s David-versus-Goliath success story. He is most recently the author of The Note Through the Wire: The Incredible True Story of a Prisoner of War and a Resistance Heroine. 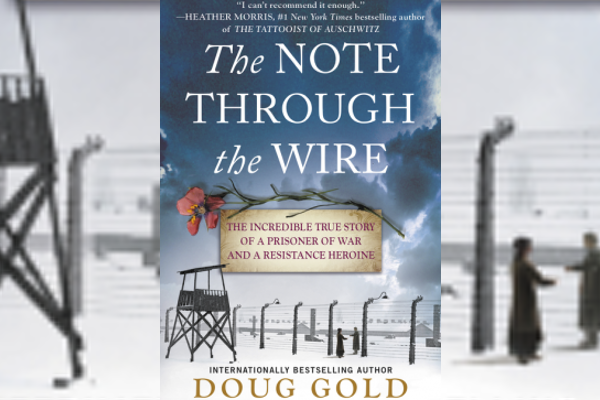 The Note through the Wire is the true story of Josefine Lobnik, a Slovene resistance fighter, and Bruce Murray, a Kiwi prisoner of war – both complete strangers - who meet by chance when she passes a note through the wire of the local POW camp seeking information on her brother who had been captured by the Nazis. Against all odds, they discovered love in the midst of a brutal war in the heart of Nazi-occupied Europe.

I’ve known about this story for almost 40 years. Bruce and Josefine had always been reluctant to talk about their wartime feats but in 1998, several years after Bruce’s death, I finally persuaded Josefine to tell their remarkable story. Our family had just shifted to France and Josefine had agreed to share her account of the events that had brought her and Bruce together. Tragically, she was killed in a car accident in Slovenia just three days before she was due to visit us in Aix-en-Provence and her memoir was never recorded.

I first heard about their love story from Anemarie, my wife (future wife at that time) who told me a little about how her parents met, but I wanted to learn more. I was too nervous to raise the subject at our first meeting, a traditional Slovenian dinner. To be honest, it was intimidating to be in the company of genuine war heroes, but quickly learned that they were ordinary people. As Josefine always said, with typical modesty: “we just did what we had to.” On our third or fourth meeting, I did ask a few questions but, like many World War II veterans, they were loath to talk about their exploits. I didn’t push it at the time, but I was determined to find out more. After persistent questioning, I started to piece together their story, which only enhanced my admiration and respect for them.

Josefine’s siblings were all active partisans. Her older sister, Anica, held a senior role as liaison officer, and was captured and tortured by the Nazis. Her younger brother, Roman, was also captured and tortured and was seriously wounded twice in partisan battles against the Germans. Her other brother, Leopold, for whom she was searching when she passed the note through the wire, was not in any POW camp. He had been despatched to the dreaded concentration camps: Flossenbürg first and then - one of the worst - Dachau.

Josefine herself undertook many dangerous partisan missions and assisted numerous POWs and airmen escape from Slovenia. She was decorated for bravery. In a letter to the New Zealand authorities, Bruce wrote: ‘For my wife’s part in my escape, and the part she played in the escape of others, she was awarded, for this highly dangerous type of war work, a citation by Field Marshal Alexander…”

After the war, Bruce made an application to the Immigration Department to resettle the whole Lobnik family in New Zealand: ‘All in all, this was quite a family of partisans … they fought as surely as my brother, my father and myself on the side of democracy. Inexplicably, that application was denied.

Bruce and I got on extremely well and, after a few drinks, he would talk more openly about what he had been through than Josefine ever would. I’m sure that painful memories of past suffering prevented her from relaying the horrors of life during Hitler’s brutal regime. Bruce’s two best friends were killed on the same day at Sidi Rezegh. He felt their loss for many years afterwards.

My own father died when I was quite young, and Bruce became more of a father to me than a father-in-law. We spent many happy times together and I often went with him to the local Returned Servicemen’s Club where he more was more inclined to reminisce about his front-line action in Greece and his time in the POW camps with other ex-servicemen who had shared similar experiences.

After the war, Bruce and Josefine lived unremarkable lives and few people would have known about their incredible story, but they were a devoted pair. I’m sure that the obstacles they had to overcome to realise their dream of a life together meant that they never forgot how precious their love for each other was. Bruce was Production Manager for a hosiery company and Josefine was a talented seamstress. It was difficult for Josefine when she first came to New Zealand. She spoke no English and the only common language she and Bruce shared was German. Josefine did learn English but that took some time - and she always spoke it with a strong accent. Once, she went into a local department store and said she needed a ”large shit.” She meant a large sheet.

There was also a lot of prejudice shown towards her. New Zealanders at that time were very suspicious of Eastern Europeans and she was often taunted and told to “go back to where you came from.” This hurt her deeply, as she had risked her life to help Allied soldiers escape and to liberate her country from the Nazis while most of her abusers had lived relatively comfortable lives at home. None would have known that she was a war heroine decorated for bravery.

Josefine was a wonderful cook and loved to prepare Slovenian meals. Maribor, her hometown, was very close to the Austrian border so much of the food had a strong Austrian influence – schnitzels, gulasches, strudels. She also cooked traditional Slovenian delicacies like potica (a nut roll), štruklji (baked rolls with various fillings), klobasa (sausage) - and her favourite, kremna rezina (a custard cream cake). Sunday lunches at their home were often all-day affairs! They were warm, caring, genuine, and generous. I loved them both.

My interest in writing a book about their exploits was rekindled a couple of years ago after a family dinner. We were talking about what Bruce and Josefine had endured and I quickly realised that their great-grandchildren knew very little about their wartime feats – even their grandchildren didn’t know the full story – and I knew then that if I didn’t record the story now it would be lost to future generations.

The research proved to be more challenging than I had ever imagined – information on Josefine was particularly hard to source because few formal records existed of partisan feats. The turning point came when my wife Anemarie found a box of letters, unopened since World War II, that described, in heart-breaking detail, many of the obstacles her parents had faced and painted a very grim picture of wartime life in Slovenia. The letters provided a wealth of information on the events that shaped their lives and gave an invaluable insight into their wartime experiences; they included not only correspondence between Josefine and Bruce immediately following the war but also letters written during the war from Josefine’s siblings and friends, some of which included coded messages.

One of the things that surprised and shocked me during my research was the harshness of the Nazi regime in Slovenia. I knew that Slovenia was in the heart of Nazi occupied Europe but I had no idea of the extent of the barbarity. The Nazi intrusion into every aspect of life was both toxic and immediate. Every trace of Slovene heritage was removed: shop signs were taken down and German ones put up; street names were changed to their Deutsche equivalents; place names – even personal names – had to be Germanised; and Slovene literature was confiscated or burned. Anything reflecting the Slovene culture or character was destroyed. Murderous reprisals became routine. Anyone with partisan connections could expect no mercy and ordinary citizens randomly selected to face the firing squad fared no better. Josefine herself witnessed these innocent residents being gunned down in cold blood in Maribor’s main square. I hadn’t realised, either, that Slovenia was a country riven by civil tensions and internal conflict.

What moved me most, though, was the bravery and resilience of the Slovene partisans who faced death and danger daily in their struggle to liberate their country from the clutches of the Nazi occupiers. I have unreserved admiration for what they accomplished under the most arduous conditions.

My only regret is that neither Bruce nor Josefine lived to see their remarkable story of courage, conviction and love finally recorded. I hope they would have approved.