Rick Halperin is the director of the Human Rights Program at Southern Methodist University in Dallas. 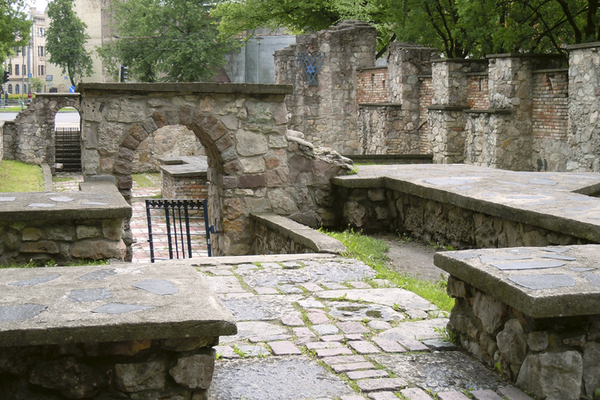 Ruins of the Great Choral Synagogue of Riga, Latvia, which was burned by Nazis with Jewish victims inside on July 4, 1941.

We’ve got a lot on our collective plates and minds, coping with a pandemic and the frustrating partisan politics that continue to mire progress.

It would be natural for us at this time to embrace the rites of Spring and avoid the haunting historical memories and anniversaries of the Holocaust that began to occur 80 years ago in Europe, and which continued beyond the end of World War II in 1945.

Even as we are solemnly reminded each April to “Never Forget.”

But my purpose and mission is to unearth these horrors anew. Tragically, and inexcusably, most Americans remain ignorant of both the locations of these terrible crimes as well as the men, among the worst killers of the Holocaust, responsible for them. Horrifyingly, recent surveys in this country indicate that over 40% of Americans, and 66% of our millennials, cannot even say what Auschwitz was.  In 2021, how is this possible or acceptable?

On June 22, 1941, Hitler unleashed his armies on the Soviet Union, thereby forever altering the nature of both World War II and history itself. In the remainder of that year, the Holocaust would claim almost 500,000 victims, innocent people shot to death by Nazi Einsatzgruppen killing squads as the Wehrmacht’s four invading armies raced northeast into the Baltics, eastward through Belarus towards Moscow, southeast into Ukraine, and farther southeasterly towards the Crimea and the Caucasus.

The Nazis were quick to reach Lithuania. From June 25-29, 5,000 people were murdered at Kaunas, in what would be among the first of more than 250 such mass executions in Lithuania. At the Ninth Fort, also in Kaunas, on Nov. 25 and Nov. 29, Karl Jager ordered the death by shooting of almost 5,000 more Jews.  Arguably the most horrific killing site in the country was located in the Ponary Forest (now Paneriai) outside the capital of Vilnius, where from July 1941 to August 1944, some 100,000 people, including over 70,000 Jews, mostly from the capital of Vilnius, were murdered.

Nazi forces entered Riga, Latvia, on July 1, and within 3 weeks, over 6,000 Jews had been killed in targeted actions against them.  On July 4, the Great Choral Synagogue in Riga was burned to the ground with Jews locked inside. Heberts Cukurs, “The Hangman of Riga,” and Viktors Arajs organized collaborationist killing squads who helped Friedrich Jeckeln murder over 25,000 Jews on Nov. 25 and Dec. 8 at the Rumbula Forest outside Riga. Thousands of Jews were similarly murdered at both Skede and Liepaja in Latvia in the most notorious killings in the country except those in Riga.

The Nazi massacre of 33,771 Jews in the ravine at Babi Yar, outside Kiev, in Ukraine, on Sept. 29-30, 1941, is the worst two-day killing spree of the war. Overall, more than 100,000 Jews would be killed there under the orders of Karl Eberhard, Paul Blobel and Otto Rasch. The murders represented one of the largest mass killing actions in the early months of the invasion of the Soviet Union.

Only the massacres carried out by Romanian forces against Jews in the Crimean city of Odessa would numerically surpass the Babi Yar killings. From Oct. 22-24, 1941, almost 35,000 Jews would be shot or burned alive in locked buildings.  Over 100,000 people would be annihilated in the area through the early winter months of 1942 under the orders of Romanians Marshal Ion Antonescu and Gheorghe Alexianu, both of whom would later be executed as war criminals.

These anniversaries serve as grim reminders of the early months of the Holocaust against the peoples of eastern Europe. While many Americans are reminded of the Japanese attack at Pearl Harbor on Dec. 7, 1941, most have no clue that in Nazi-occupied Poland, on Dec. 8, the Germans began operating the first of six death camps, at Chelmno, where some 360,000 Jews from the Lodz ghetto would be taken to be killed in mobile gas vans and buried deep within a forest setting. The first phase of killing at Chelmno would last until April 11, 1943, coinciding with the deadliest phase of the Holocaust. The camp would resume its operations once more from June 1944-January 1945.

As awful as these murders were in 1941, the worst was yet to come. The following year would mark the zenith in frenzied Nazi killing in the death camps at Belzec, Sobibor, Treblinka, Majdanek and Auschwitz-Birkenau (which was already killing people in 1941). The 80th anniversary of the Final Solution at those sites will be solemnly remembered next year.

The war and mass murders inside the Baltics and Soviet Union 80 years ago may seem to be only a distant memory today within our country. The Nazis' premeditated attempt to obliterate peoples from the earth is today, eight decades and at least four generations afterwards, increasingly forgotten and ignored. Yet the evils of intolerance, racism, prejudice, and the horrors of ethnic cleansing that combined to produce the destruction of some 11 million people during the Holocaust live on, and even worse, remain pervasive today.

The Nazi goal was to eradicate them from the face of the earth and to then remove all traces of the instruments of their destruction: the camps were to be destroyed, the ground plowed over, all previously buried victims to be exhumed and burned and reduced to ashes, and no traces or records of the slaughter were to be left. In essence, the goal was to leave no memory of these victims for future generations.

Those of us alive today have an obligation to remember what happened, as well as the reasons why it happened and was allowed to happen, because we have the responsibility to at least try to prevent it from happening again. The very fact that the dehumanization and destruction of “undesirables” continues in our own time should serve as a gruesome reminder that Nazi ideology is still alive and well, and has been improved upon since 1945.

We must see our lives as inextricably linked to both the past and future, so that all peoples, individually or collectively, do not have to know of a world with genocide.

As we prepare to enjoy the remainder of our spring and impending summer months, let us pause to remember those who, through no fault of their own, were not allowed the same seasonal joys of Eastern Europe, 1941. Let us commit ourselves to remembering and learning from that difficult year, and to educating ourselves, our children and successive generations, so that our voices and memory will open new futures of hope, of restraint and of justice. There is no such thing as a lesser person.