Russia vs. Ukraine Redux? Mapping the Way Forward from the Recent Past 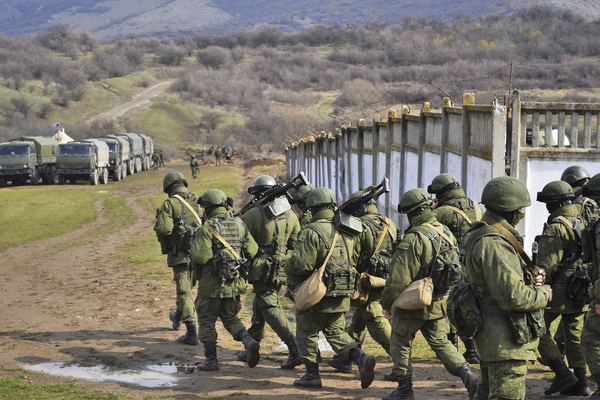 "Little Green Men" – masked and unbadged soldiers of the Russian Federation near the Ukrainian military base at Perevalne, Crimea, March 9, 2014.

In April 2014, because of Ukrainian-Russian tensions, I quoted historian Stephen Cohen: “I think that we are three steps from war with Russia, two steps from a Cuban missile crisis.”  Now, seven years later, New York Times Moscow correspondent Andrew Kramer writes of “the largest military buildup along the border with Ukraine since the outset of Kyiv’s war with Russian-backed separatists seven years ago. . . . The [Russian] mobilization is setting off alarms in the North Atlantic Treaty Organization, European capitals and Washington.”

On 20 April Ukrainian President Volodymyr Zelensky warned Ukrainian TV viewers of the possibility of war, urged Russian President Putin “to step back from the brink,” and proposed meeting with him. Only on 22 April did Russian Defense Minister Sergei Shoigu announce that Russia would begin withdrawing military forces from the Ukrainian border.

A key question is Russian President Vladimir Putin’s motivation for Russia’s massive buildup, and we will return to it later in this essay. But first, as with many international crises, we need to understand the historical background of it.

Thus, to begin with, a brief survey of past Russian-Ukrainian relations. For several centuries, Ukraine was part of Russia. Soon after the collapse of that multi-ethnic Tsarist country in 1917, and the creation of the USSR in 1922, Ukraine became one of the tightly-Communist-controlled Soviet Republics and remained so until the 1991 breakup of the Soviet Union’s 15 republics into separate countries. In the thirty years of its existence as an independent state, Ukraine has see-sawed back and forth in regard to its relationship with Russia and the Western powers which dominate NATO.

Part of the reason for this see-sawing is the ethnic makeup of Ukraine. According to the 2001 Ukrainian Census, in western regions less than 5 percent of the people were ethnic Russians; in a few of the most eastern regions almost 40 percent were. Many others, in both eastern and western Ukraine, have both Ukrainian and Russian ancestors. In addition, many who consider themselves ethnic Ukrainians list Russian as their main language.  In general, citizens in western Ukraine have been more favorable to closer Ukrainian ties with the West, including possible European Union (EU) and NATO membership, while those in eastern Ukraine have been more likely than western Ukrainians to favor closer Russian ties.

In 2014 after Ukrainian President Viktor Yanukovych backed off a closer relationship with the EU, protests in Kyiv lead to his ousting. Putin, long concerned with growing Western influence in Ukraine and other former parts of the USSR, claimed that the West was behind driving Yanukovych from power. Putin then encouraged a vote for secession in Crimea, which was part of Ukraine but contained more than 50 percent ethnic Russians. After Crimea voted to secede, Russia then annexed it. Two other Ukrainian areas, aided by Russian “volunteers,” also chose to secede, both in the eastern Ukrainian Donbas region bordering Russia.

Those secession movements proclaimed the establishment of the Donetsk and Luhansk Peoples’ Republics (DPR and LPR), which in 2014 fought against Kyiv-backed troops and still exist today. Both of these republics contain only part of the regions (oblasti) they exist in, the other parts being controlled by the Ukrainian government and troops. As a result of the conflict which has simmered from 2014 to the present, around 14,000 people have died and over 2 million have fled the regions, going either to Russia or other parts of Ukraine.

A survey reveals something of the people’s wishes in early 2021 in the Ukrainian-controlled (U) and rebel (R) areas. It was carried out by U. S. and western European scholars including Gerard Toal (see below). According to it, about three-fourths of those in the U area think the two “republics” should be returned to Ukraine (with or without Ukraine granting them some autonomy). In contrast, in the R areas a slight majority want to join Russia, either with or without some autonomous status. Comparing their survey with an earlier 2019 one, the scholars who conducted the 2021 poll conclude that the “desire to return to Ukrainian government control in the breakaway territories appears to be fading.” Thus, even if and when Russia reduces troop levels in border areas, Russian-Ukrainian tensions regarding the self-proclaimed republics will continue.

Also important is how Russian citizens feel about the status of the DPR and LPR. According to an April 2021 survey by the respected Levada Center, a little over one-fourth of those surveyed thought the two self-proclaimed republics should be recognized as an independent state or states; about half of the survey sample were split almost evenly between those who thought they should become part of Russia or part of Ukraine (with or without Ukraine granting them some autonomy), and a little less one-fourth were unable or unwilling to choose any of the above options. Thus, public opinion in Russia is not pushing Putin toward annexing these two “republics” or setting them up as Russian satellite states.

As mentioned earlier, understanding Putin’s motivation for massing large numbers of Russian troops along the border is important. Significant in this regard is Zachary Shore’s  A Sense of the Enemy: The High Stakes History of Reading Your Rival's Mind (2014). In a review of it, I quoted his words, "Understanding what truly drives others to act as they do is a necessary ingredient for resolving most conflicts where force is not desired. It is, in truth, an essential first step toward constructing a lasting peace.”

In a recent interview former U. S Ambassador to Ukraine William Taylor said, “no one can get inside the head of Mr. Putin. No one understands his motivations.” To some extent this is true, but as I pointed out in 2015 there is a “Surprising Consensus on What the Experts Say about Putin.” He is a pragmatist, not an ideologue. He intends to restore Russia to major power status. He believes that Russia and many other countries require a strong state government and encourages patriotism to support it. He is deeply distrustful of Western-style democracy, the United States, and NATO and believes that Russia offers a unique civilizational model that differs from—but is equally valid to—that of the West. He is especially distrustful of any talk of bringing Ukraine into NATO, and he suspects major Western countries of trying to weaken him and Russia. His past experience as a KGB officer encourages his suspicious, conspiratorial views.

Since 2015 the Trump presidency occurred bringing with it President Trump’s surprising reluctance to find any fault with Putin. But now, with Joe Biden as U. S. president, U.S.-Russian relations are back on more familiar terrain. And Putin’s mindset does not seem to have changed much from the late Obama presidency.

So where does that leave us in figuring out what’s up with this spring’s Russian military buildup on the Ukrainian frontier? As usual in trying to analyze crisis situations--or current affairs generally--determining reliable sources of information and analysis is of vital importance. (See, e.g., my 2014 op-ed “Whose Advice Should You Trust on Ukraine?”)

One whose expertise I value is Dmitri Trenin, head of Moscow’s Carnegie Center. Andrew Kramer cites him in the essay mentioned above, and Georgetown’s Angela Stent has called him “one of Russia’s most astute foreign policy observers.”

In an April 13 essay, he indicates that “it was [Ukrainian President] Zelensky who moved first.” Trenin mentions him closing down some Russian-language TV stations, charging some pro-Russian opposition “leaders with high treason,” and approving, in February, military moves close “to the conflict zone in Donbas.” These actions were

“enough to get him noticed in Moscow. . . . Even if Ukraine cannot seriously hope to win the war in Donbas, it can successfully provoke Russia into action. This, in turn, would produce a knee-jerk reaction from Ukraine’s Western supporters and further aggravate Moscow’s relations, particularly with Europe. . . . Being seen as a victim of Russian aggression and presenting itself as a frontline state checking Russia’s further advance toward Europe is a major asset of Kyiv’s foreign policy.”

Although Trenin does not mention it in his essay, in early April Zelensky asked that NATO approve of a membership plan for Ukraine’s joining that organization, arguing that such a step would deter Russian aggression.

“to raise the stakes. . . . Moscow felt it had nothing to lose and something to gain by acting boldly and on a larger scale. Russia decided not so much to test the new U.S. president as to warn him early on of the dangers involved regarding Ukraine.”

“it’s unlikely that Putin was bluffing when he said that a major attack against Donetsk and Luhansk would provoke a massive Russian response with catastrophic consequences for Ukraine.”

On the other hand, “Moscow will not formally recognize the [self-proclaimed] republics or allow them to accede to Russia.” Trenin does not view Putin as a warmonger: The main reason for the Russian border mobilization

“was to prevent the need to actually go to war against Ukraine in the future. . . . Going overkill in terms of military maneuvers on the Ukrainian border now may avoid the need to do terrible things at a later point. Under that same logic, doing nothing now would sow uncertainty and invite trouble, while doing nothing when trouble arrives would be suicidal for the Kremlin leadership.”

Besides Trenin, I also value the opinions of Gerard Toal, mentioned earlier as one of the scholars involved in a 2021 Donbas survey. Earlier, in 2017, he authored Near Abroad: Putin, the West, and the Contest over Ukraine and the Caucasus. In a review of it, I quoted favorably his words about trying to view objectively Putin’s motivations. Understanding them does not mean approving of them and does not provide the Biden administration and NATO with any detailed plan for negotiating with Putin and Ukraine.

But it does suggest some do’s and don’ts. Among the latter are: don’t, if you’re the U.S. or NATO, support a Ukrainian military attack against the Donetsk and Luhansk Peoples’ Republics, and don’t bring Ukraine into NATO. Former ambassador to Russia Jack Matlock (named by President Reagan and serving from 1987 to 1991) once stated that he thought that NATO expansion and talk of bringing Ukraine into NATO has been “Putin’s main concern” and that such talk has been “irresponsible.”

A “do,” as I indicated in the ending of a 2014 op-ed on U. S. policy on Ukraine, is the exercise of “more political imagination—on all sides.” Matlock and two other former U. S. ambassadors to Russia noted in 2014 that U. S-Russian relations had “descended into attempts by each side to pressure the other, tit-for-tat actions, shrill propaganda statements, and the steady diminution of engagement between the two governments and societies. . . . What the Western strategy lacks is an equally vigorous diplomatic approach to ending this conflict.” Such an approach might be similar to that taken by the USA, the USSR, the UK, and France in 1955 when they all agreed to pull out of occupied Austria provided it remained neutral. Austria agreed. It was a win for Austria--and a win for each of the former occupying powers.